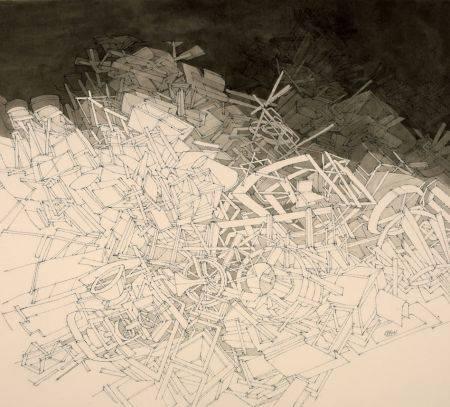 “George Olson: The Found Object" at the Figge Art Museum -- through April 19.

Focusing on the artist's earlier works that employ found objects as inspiration, the Figge Art Museum's current exhibition George Olson: The Found Object, on display through April 19, finds its creator using a range of mediums – among them woodcut relief, ink wash, charcoal, and assemblage – to move beyond the objects he is referencing in order to create bold graphic abstractions that simulate the intriguing surface textures of his source material.

Born in 1936 and a native of Lake City, Minnesota, Olson earned a 1963 MFA from the University of Iowa, and spent many years as a faculty member at Ohio's Wooster College of Art and Design. He has enjoyed more than 100 regional, national, and one-man exhibitions throughout the world, with his works having been shown at Ohio State University, the Hunt Institute for Botanical Development, and a number of galleries and museums in England, including the British Museum of Natural History. Olson's work has also been reproduced in books and periodicals, with Garden Magazine, the official journal of the Royal Horticultural Society, highlighting his works on its cover in May of 1988.

In the exhibition notes for Olson's recent found-object showcase Relief Prints, it is stated: “Artists like Olson make things which are not only 'good to see,' but equally 'good to think.' His presentation of 'printables' encourages not only a direct, sensuous experience with their decorative qualities, but also suggests a fresh and thoughtful presentation of our environment. … For Olson, the world is a kind of 'junkyard without walls.' His quest for printable materials involves the whole tangible environment, which, he says, 'soon becomes divided into those objects which will print and those which won't.' Those which will print from his artistic vocabulary, and are absorbed and stored in that creative center so appropriately described by Yeats as 'the foul rag-and-bone shop of the heart, later to emerge as art.”