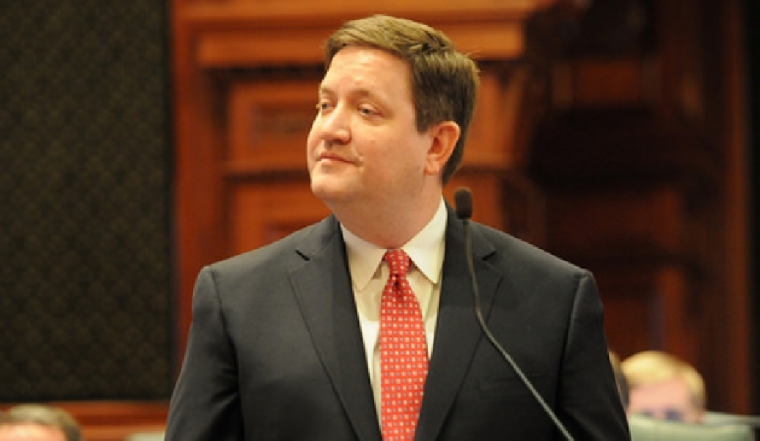 Representative David McSweeney (R-Barrington Hills) announced last week that he will not seek reelection. Instead, he said he'll likely be making a 2022 statewide bid for either US Senate against Senator Tammy Duckworth or Secretary of State if Jesse White retires.

He may not be a household name, but Representative McSweeney has been a huge thorn in Republican leadership's side since he first ran for the Illinois House in the 2012 primary.

In other words, he did not arrive in Springfield well-liked by the people who ran his own party. And he hasn't tried to ingratiate himself with them at any point since then.

He refused to attend House Republican caucus meetings and eventually became one of the most outspoken Republican critics of Governor Bruce Rauner. Representative McSweeney became a go-to person for reporters needing anti-Rauner quotes. He basically served the same purpose as former Democratic State Representative Jack Franks, who built up his name-recognition by regularly slamming Democratic governors, was beloved by political reporters, and now chairs the McHenry County Board. Representative McSweeney's district includes part of McHenry County, and Representatives Franks and McSweeney have worked together over the years to pass various local government-related bills.

Representative McSweeney is an information sponge. He is super-smart and makes it his business to constantly find out what is going on in this state's politics and governance.

He immediately sought out many of Springfield's old hands after taking office and pumped them for every bit of advice and insight he could get. Those relationships, combined with his outspoken critiques of his own party helped him pass a lot of bills through the Democratic-controlled House, and also probably helped keep him safe from any serious general-election challenges.

The 52nd District was long considered a Republican bastion, except for the usual Jesse White wins. (The popular pol routinely wins most legislative districts and won every single county in 2002). Republican Mitt Romney defeated President Barack Obama by 10 points in the district during the 2012 election.

But President Donald Trump, who had problems everywhere in suburbia, only won Representative McSweeney's district by a mere 1.6 percentage points in 2016. And then Democratic Comptroller Susana Mendoza won it last year by 2 points. President Trump isn't doing much to improve his popularity in the suburbs, so 2020 could be even worse for Republicans in that part of the world.

Representative McSweeney has sharply criticized Governor JB Pritzker, so it's possible that the Democrats might have tried to take him out if he ran again, but it seems unlikely, since his dissension in the Republican ranks can be quite useful to their Statehouse purposes. (Every time the Democrats advanced one of Representative McSweeney's bills, they drove the other side crazy). Even so, a warm Democratic body with little party-support could've forced Representative McSweeney to spend big bucks on his reelection just to be safe, and that money would be better spent on setting himself up for the 2022 statewide contest.

The House Republican operation was completely blindsided (and overjoyed) by Representative McSweeney's announcement, so they don't yet have a list of possible candidates.