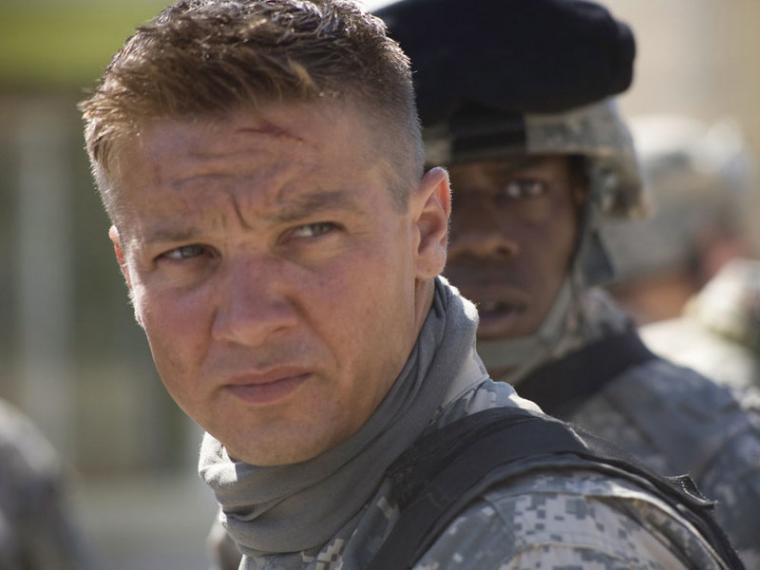 Jeremy Renner in The Hurt Locker

Granted, I was in Illinois when I watched this morning's announcement of the 82nd Annual Academy Award nominees. But I'm still reasonably sure that, as Anne Hathaway finished reading the list of 10 Best Picture nominees, I could hear Academy of Motion Picture Arts & Science President Sid Ganis sigh with relief - along with the Academy's Board of Governors, Oscar-telecast producers Adam Shankman and Bill Mechanic, and everyone at ABC.

For it looks as though the Academy's decision to up the number of Best Picture contenders from five to 10 did exactly what everyone involved wanted it to do: extend some major love to the sorts of box-office smashes that have been slighted in the past (cough cough ... Dark Knight! ... cough cough), and prove that the Academy isn't entirely out-of-touch with the tastes of the masses. So in a year that would've, under usual circumstances, seen the five nominations all but assuredly going to Avatar, The Hurt Locker, Inglourious Basterds, Precious, and Up in the Air, the expanded Best Picture field also found room for a trio of titles that might boost rooting interest and secure trajectory-reversing ratings for ABC: the $115-million-grossing District 9, the $292-million-grossing Up, and the $240-million-and-counting-grossing The Blind Side. (The announcement of this Best Picture nominee, somewhat surprisingly, received the biggest cheers from the assembled press corps, and I'm looking forward to the movie's new publicity push: "Nominated for two Academy Awards - including Best Picture!")

Still, the bigger news of the morning involved the impending duel that's been dubbed "David and Goliath" by just about every media outlet under the sun: the eventual Best Picture battle between James Cameron's Avatar and Kathryn Bigelow's The Hurt Locker. Just when you thought this story couldn't possibly get more dramatic (Ex-spouses up for rival films! Unprecedented box office versus staggering critical acclaim! The current number-one theatrical release and the current number-one DVD release!), the nominations announcement added an extra layer of excitement, as the sci-fi phenomenon and the Iraq War thriller managed to lead the list of Oscar contenders with nine nominations apiece. For those who've been following this year's Academy Awards race through such entertaining blogs as AwardsDaily.com and InContention.com - and I have ... although, ahem, never during office hours ... - you'll know that this tie was not only dramatic but somewhat unanticipated, as Cameron's movie was thought to have the clear advantage in terms of its final tally. (The Oscar-blog visitors among us also know that, as a result of the tie, the Avatar and Hurt Locker haters out there will no doubt be incited to even further degrees of pseudonymous pissed-off-edness.) In the acting categories, though, the only shock lay in how little imagination voters exhibited. Excepting Supporting Actress nominee Maggie Gyllenhaal, the performers cited were repeats of those recently up for Screen Actors' Guild Awards (the Crazy Heart performer replaced Inglourious Basterds' SAG-nominated Diane Kruger), and the Supporting Actor contenders were actually three-peat nominees - the same quintet nominated for Golden Globe Awards. (I was really hoping that Me & Orson Welles' Christian McKay and The Hurt Locker's Anthony Mackie would garner the Supporting Actor nods that went to Matt Damon and Stanley Tucci. But I can more easily accept this duo's recognition for Invictus and The Lovely Bones by imagining it as de facto acknowledgment of their other 2009 performances - in The Informant! and Julie & Julia - that were actually much, much better.)

Where did the other surprises stem from? Well, I thought that the inclusions of The Messenger and In the Loop among the Screenplay nominees were nice bits of outside-the-box thinking. (I'm hoping to finally catch both titles prior to the March 7 Oscar ceremony, along with the nominated Crazy Heart, A Single Man, The Last Station, The White Ribbon, The Imaginarium of Dr. Parnassus ... man, I'm behind this year ... .) Four of the five Best Animated Feature nominees were expected ones, but in favor of such recognizable titles as Cloudy with a Chance of Meatballs or A Christmas Carol or Ponyo, voters opted for the hand-drawn foreign film The Secret of Kells, which was a huge shocker. (Even the Internet Movie Database doesn't provide much information on this mystery guest to Hollywood's Big Party, though one passage of Secret of Kells' dialogue did make me chuckle out loud: "You can't find out everything from books, you know." "I think I read that once.") The ever-nutty voters for Best Original Song didn't embarrass themselves this year, ignoring that god-awful Avatar ballad in favor of something called "Loin de Paname" from something called Paris 36 - I hadn't previously heard of either the number or the film, but it's got to be the preferable choice, right?

As far as my own favorite nominations are concerned, I have to list A Serious Man's Best Picture nod as the most personally satisfying; I was all but sure that the Coen brothers' latest masterpiece was going to be dissed in every category except Best Original Screenplay. (And I should apologize for the earlier Blind Side crack, as the Coens' comedy - available on DVD and Blu-ray on February 9, by the by! - is also "Nominated for two Academy Awards - including Best Picture!") I was just a little worried that my favorite leading performance of the year - Jeremy Renner's in The Hurt Locker - was in danger of being overlooked, but the Best Actor nominees landed exactly the way nearly everyone thought they would. I would've loved to have seen a better overall showing for Fantastic Mr. Fox, but I was at least happy to see Alexandre Desplat's playful Original Score make the lineup. (Even though it'll probably lose out to Up ... just as it will in the Animated Feature category.) And truly, I couldn't be more excited about The Hurt Locker managing to score as many nods as Avatar, and for it to be facing off against the sci-fi behemoth in a full seven of the nine categories they're each nominated in - most of which are sure to be real nail-biters. Bigelow's Best Director victory might be as done a deal as Avatar's eventual Best Visual Effects triumph, but I think you could make a more-than-solid case for either film in Cinematography, Film Editing, and the two Sound categories. As for the night's final contest, the producers of Avatar's and Hurt Locker's eight fellow nominees should just sit back and enjoy this legitimately historic match-up, as the climactic champion will either be the highest-grossing film of all time, or the lowest-grossing Best Picture winner in decades. It's definitely David versus Goliath, folks.

Up in the Air

Lee Daniels, Precious: Based on the Novel Push by Sapphire

Jason Reitman, Up in the Air

George Clooney, Up in the Air

Sandra Bullock, The Blind Side

Gabourey Sidibe, Precious: Based on the Novel Push by Sapphire

Vera Farmiga, Up in the Air

Anna Kendrick, Up in the Air

Mo'Nique, Precious: Based on the Novel Push by Sapphire

Geoffrey Fletcher, Precious: Based on the Novel Push by Sapphire

Jason Reitman, Sheldon Turner, Up in the Air

The Princess & the Frog

The Secret of Kells

"Almost There," The Princess & the Frog

"Down in New Orleans," The Princess & the Frog

The Milk of Sorrow, Peru

The Most Dangerous Man in America: Daniel Ellsberg and the Pentagon Papers

Transformers: Revenge of the Fallen

The Last Truck: Closing of a GM Plant

A Matter of Loaf and Death