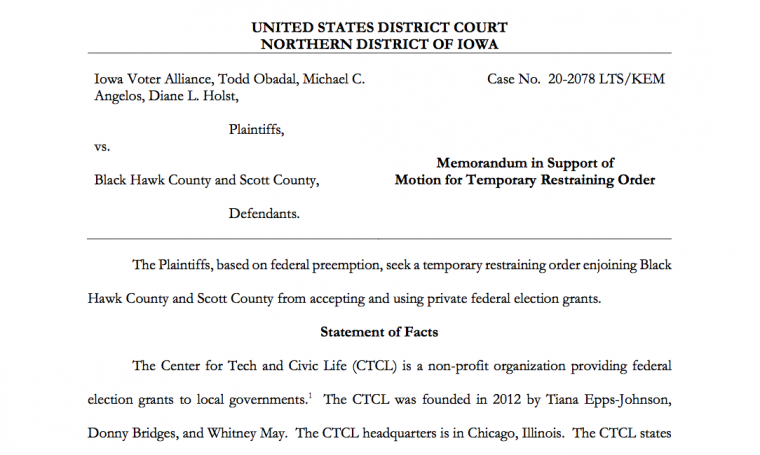 Scott Countians recently learned that County Auditor Roxanna Moritz, a longtime activist for both the Scott County and Iowa Democrat Parties, applied for and received a COVID-19 Relief Grant from the privately funded, Chicago-based non-profit organization Center for Technology and Civic Life (CTCL) in the amount of $286,870 for election management. (RCReader.com/y/ctcl1 and RCReader.com/y/ctcl2)

Concerned Iowans contacted attorneys with the Amistad Project about filing a federal lawsuit similar to the ones funded by the Chicago-based non-profit organization Thomas More Society which has filed suits in Wisconsin, Michigan, Minnesota, and Pennsylvania. (South Carolina, Texas, and Georgia are also filing this week.) (RCReader.com/y/amistad) The Iowa Voters Alliance (IVA) was formed and a complaint opposing this grant on grounds that it violated federal election law, including a request for a temporary injunctive relief, was filed in Iowa's Northern District Federal Court Monday, October 5, 2020. (RCReader.com/y/iva1)

The complaint cites federal election law, claiming it prohibits states from accepting private funds for public purposes – in this case elections – that are governed and budgeted as part of the state's authority and purview, therefore funded via tax dollars. CTCL's lawfare claiming counties and municipalities have jurisdictional authority to accept these funds because they are not states, therefore not governed by the same federal restrictions, borders on the absurd, as each is a legal construct of their states.

But if that legal argument fails, then there is always COVID to blame (essentially the “better to ask for forgiveness than permission” strategy). Election officials are claiming the current pandemic has brought budget hardships to the 2020 election and the grants are necessary for safe elections. There is useful evidence (in Scott County, at least) to likely derail that strategy, especially due to Auditor Moritz's lack of transparency before unveiling the grant at the eleventh hour in an early-October special emergency meeting.

Over 40 percent of Iowa counties received grants in varying amounts from CTCL, as did many other counties and municipalities in the critical swing states throughout the Midwest and eastern states. Very few grants were awarded in western states by comparison. The counties and cities that did not receive grant money is just as indicting as those that did.

While CTCL denies any partisan bias in their COVID-relief grant allocation, dismissing the lawsuits as frivolous, its grant distribution map at CTCL's Web site plainly depicts its partisan agenda to augment public elections by providing significant resources in largely swing states where a high Democrat voter turnout is needed for this election. (RCReader.com/y/ctcl5)

The funds can be used for a wide variety of efforts, including poll workers, mail-in voting, PPE, absentee-ballot collections (a.k.a. potential ballot harvesting, specifically prohibited in Iowa), adding early in-person voting sites, mobile drop boxes (also prohibited in Iowa), voter registration, and voter education, all under the cover of providing safe elections during the current pandemic. CTCL's own grant agreement states that at their full discretion they can claw back all of the funds, leaving taxpayers footing the bill if CTCL doesn't like the outcome. (RCReader.com/y/ctcl6)

During an emergency Scott County Board meeting on Friday, October 2, to accept the $286,870 CTCL grant, the decision was tabled by all five supervisors. The request to the board was then abandoned altogether the following week, thanks to a vague legal opinion proffered by Assistant County Attorney Robert Cusack, concluding that Auditor Moritz's acceptance of the grant did not require the Board's approval. (See Supervisor question number six on page 13.)

Advocates of Moritz justify her acceptance of the partisan funding, citing that her office is an elected one and if the voters don't like her policies, they can express it at the polls. Amen. But she is conveniently running unopposed this time. It's unfortunate that Moritz has forfeited the bipartisan trust she richly enjoyed from so many Scott Countians with this blatant partisanship, which is unacceptable in her position. Meanwhile, there are other effective ways to engage with her office and protect our votes, thereby our elections.

In her defense, Moritz claims she believed the grant to be sanctioned by Secretary of State Paul Pate's office, who is a Republican. Iowa auditors were introduced to CTCL and invited to apply for its grants during a statewide conference this past summer arranged by Pate's election officer. Still, its hard to misinterpret the obvious partisan tilt of this particular NGO and its Zuckerberg-funded mission.

However, the plot thickens as CTCL's origins, mission, leadership, staff, formidable capacities in election technology, and funding sources beyond Zuckerborg (including tech giants such as Google and Microsoft, oligarchs Rockefeller Brothers Fund, and politically left organizations such as Democracy Fund, etc.) are revealed as strategic partners. Long tentacles reach deep into the local and state election offices nationwide, many of which are coincidentally staffed by ex-CTCL employees, advisors, and members. (RCReader.com/y/ctcl6)

The dangers in allowing private money into local governments' election coffers, otherwise mandated to be funded by tax dollars, cannot be overstated. This is unprecedented. All of the Scott County Board of Supervisors ran for cover instead of demonstrating leadership by moving to stop this overt partisan election interference.

If IVA can't stop this election meddling via the federal court restraining the spending of CTCL funds, then Scott Countians need to step up and protect their ballots' integrity by volunteering (one Democrat with one Republican at all times) to participate in every task being funded, to ensure parity among the 350-plus extra workers that have been hired by Auditor Moritz. Parity here, parity there, parity everywhere: at the polls (whether at all locations during early in-person voting or at all 63 polling sites on November 3) as poll watchers, ballot counters, ballot certifiers, witnesses to chain of custody of ballots, daily counting/supervision of counting of absentee ballots/mail-in ballots in the counting room(s), random audits of counts, periodic reviews of recordings of the counting and reviews of daily expenditures. In other words, gather an army of election watchdogs from both parties to daily monitor all aspects of the election process to prevent error or sabotage, and deliver proper and trusted voter results, most especially in this excessively toxic political climate.

If Scott County voters can't muster this small effort of civic vigilance for this short, finite period of time to protect its own electoral authority going forward, then America's Republic really is lost – deservedly so. People endure the amount of tyranny they allow.