Winners from the Reader's 2015 Photo Contest 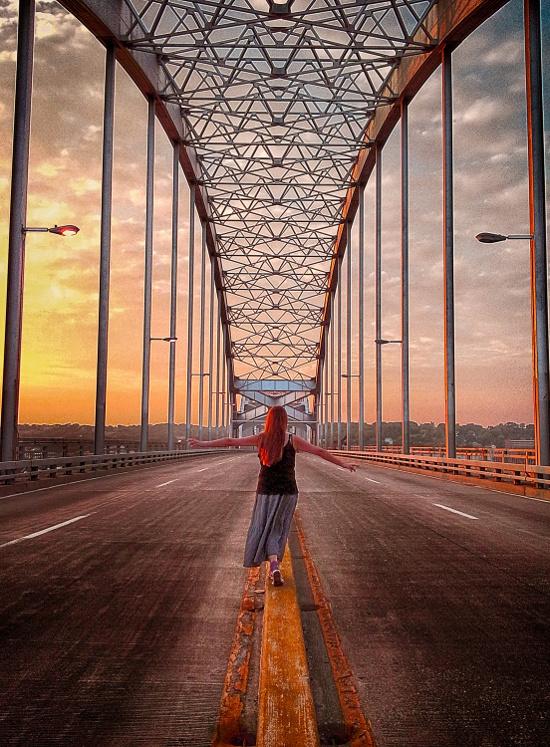 Many thanks to those who submitted entries to our 2015 photography contest, with the categories "On the Waterfront," "School's Out," "Summer in the City," and "Hot Stuff!" Our favorites are presented here, along with any comments from the photographer. Click on each photo for a larger version.

"Because of road construction, we had the bridge to ourselves. We floated there for a time with the sound of a ballgame in the stadium on one side and music from Ya Maka My Weekend on the other. It was a dreamlike no man's land where the sunset roared in reds and golds. We were happily abandoned between two worlds, alone among the crowds." "Clouds of steam rising from the Excelsior Geyser in Yellowstone National Park." "Taken in July 2014 after the Mississippi flooded." "Frisbee at the park." "While attempting to escape the Miami heat, I stumbled upon a 'cool down' area of fans." "Taken in March 2015 along the California coast just north of Morro Bay." "My stepson Liam helping me practice off-camera flash during our first bonfire of the season!" "This was shot in my driveway using charcoal-starter fluid and, of course, a standard jack-o'-lantern with my Nikon D3000." "I was making pictures of the winter sun on a black, volcanic sand beach in southeast Iceland on a cold winter morning. The beach was littered with icebergs that washed up after breaking off a nearby glacier into the ocean. I saw the opportunity to make a picture of the low, winter sun with its light fractured into a blaze of spectral colors as it passed through the ice in this small 'berg. I waited for the distant man on the beach to move below the water droplet suspended over him before making the picture." "This is my interpretation of the Pemaquid Point Lighthouse near Bristol, Maine." "Pelican flying over the water at Lock & Dam 14 in Hampton, Illinois."