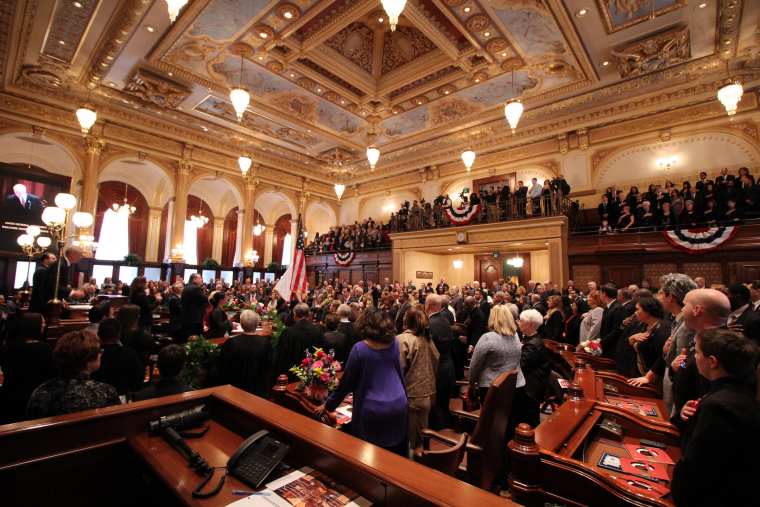 Senator Steve Landek (D-Bridgeview) and other Senate Democrats have been meeting since the 2018 session as part of a loosely-affiliated group that calls itself the "X Caucus." They apparently didn't know what to call themselves, so "X" filled in the blank.

The X Caucus is comprised of some of the more conservative Senate Democrats. Some are not 100 percent pro-choice; some are hesitant or even unwilling to vote for tax increases; most think the party has veered a bit too far to the left.

It's possible the group could have enough votes to team up with a current Senate president candidate and elect the successor to retiring Senate President John Cullerton, or prevent an election until their demands are met. There are a whole lot of officially undecided Senate Democrats still out there, even though the three top candidates, Senators Kimberly Lightford, Don Harmon, and Elgie Sims, have been working members.

But there's also a long time to go until Senators vote to elect their new President near the end of January, so that loosely-affiliated caucus could be picked apart by the time the voting starts. We'll see.

It should also be pointed out that Senator Landek is very close to House Speaker Michael Madigan. The other members of that caucus are, for the most part, not Madigan-haters, either. Just saying, but Madigan has never seen an Illinois political situation he didn't want to influence.

Senator Elgie Sims (D-Chicago) began expressing interest in becoming the next Senate President not long after Cullerton announced his pending retirement in mid-November.

Senator Sims' name hasn't been mentioned very often lately in news accounts, but he's still campaigning. It's possible that at least some members of a loosely-aligned group of a half-dozen or so independent-minded, younger liberal Senators may wind up backing him.

Six votes is far from the number required to win the election, of course. It will take 30 votes when all is said and done. But combine that with the "X Caucus" votes and it might be enough to slow down or even stop the process. Whether the caucus' two wings can learn to fly together is a whole other story.

Sims has only been a Senator since January of 2018, but he was on Senate staff for a decade, rising to the top of the Appropriations staff before serving in the House for almost six years. He's a budget expert and knows the process back and forth. Even so, convincing Senators who have "paid their dues" for many years to support somebody who basically just got there for Senate President will be a big ask, no matter how talented Senator Sims may be (and he most certainly is talented).

Meanwhile, some members with primaries and general elections are likely becoming antsy as the president election process enters its second month this week and their own reelections draw near. One way of calming those nerves is to demonstrate fundraising abilities. Senator Sims, however, has reported no contributions in the past month.

Senator Lightford (D-Maywood) held five fundraisers in the month following Cullerton's retirement announcement and reported $649,000 in contributions last week. About $215K of that was from the personal campaign funds of herself and Senators Andy Manar and Heather Steans (plus a contribution out of Steans' own pocket), her top supporters. She'll report another $36K in contributions under the immediate reporting threshold next month, I'm told.

Senator Lightford's haul is less than the $755K Assistant Majority Leader Don Harmon has reported raising in the same time period. But that total is inflated because it includes a $100K loan from Harmon to his personal campaign committee (Harmon has not created a leadership committee). Harmon also nearly emptied out three party committees he controls to the tune of $285,000. Harmon reported 44 individual contributions (including the personal loan), which is just a fifth of Lightford's donor base of 213. He's supposed to be reporting more money soon.

The biggest outside contribution Harmon received was $100,000 from a journeyman plumber's union. Senator Lightford raised a bit of money from the Illinois Education Association for her personal fund. Otherwise, unions appear to be taking a wait and see approach.

One knock on Senator Lightford has been that she doesn't have a history of raising big money, so doubts naturally arose about whether she could do it. But she and her team have proved otherwise during this first month.