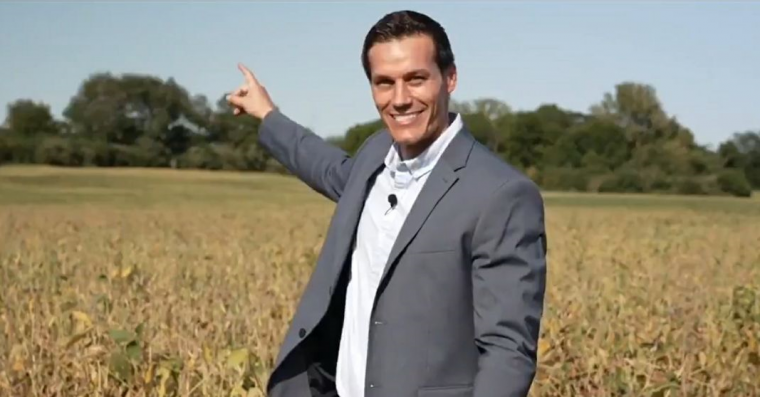 When a relative unknown named Jesse Sullivan jumped into the race earlier this month with a nearly $11 million out-of-state-funded campaign war-chest, state Senator Darren Bailey and businessperson Gary Rabine both called him a member of the San Francisco/Silicon Valley “élite” because that’s where his business was located and where much of his campaign money came from.

The Silicon Valley angle took hold in segments of the mainstream media. Did Sullivan really live in downstate Petersburg, as he claimed, or did he live in the San Francisco area? Sullivan’s campaign pushed back hard on the out-of-state angle, insisting he was a Petersburg guy who had made lots of influential business friends in California and other states.

But Schimpf, a former state Senator, actually welcomed Sullivan into the fray, saying, “another robust campaign spreading the message that JB Pritzker is undeserving of re-election is good news for the Illinois Republican Party.”

Schimpf was born on an Air Force base in the Metro East, graduated from Annapolis Naval Academy, then graduated from law school, and served twenty years in the US Marines, serving as the chief American adviser to prosecutors in Saddam Hussein’s trial. His service, to my knowledge, has not been questioned, but his ire was raised by some of Jesse Sullivan’s campaign claims.

The neophyte Sullivan has peppered his campaign website and announcement with photos of himself in military uniform.

“I proudly served our nation in uniform doing counterinsurgency work in Helmand Afghanistan with the US Department of Defense,” Sullivan declared in his campaign announcement speech near Petersburg.

Sullivan was part of what was known as the Army’s Human Terrain System, which recruited civilians with social-science backgrounds to help military commanders understand the local populations. A 2012 profile of Sullivan in the State Journal-Register mentioned that his team “left the British military unit stationed in the area with recommendations for strengthening the local police force and reopening a school.”

When I questioned Sullivan’s campaign about this seeming rhetorical contradiction, they acknowledged that he was an Army civilian without veteran’s status who nevertheless “led and participated in combat patrols in Afghanistan.”

The Army’s unclassified handbook on the Human Terrain Team says its leaders were active-duty or retired military officers. So, I asked, how could Sullivan have “led” combat patrols?

Sullivan’s campaign responded with a 300-word background statement which claimed Sullivan’s Army team leader never left the base. Instead, the campaign claimed, Sullivan led a small team consisting usually of “another human terrain analyst, possibly a social scientist depending on the mission, and an interpreter,” which would, “embed with a military unit.” Sullivan “was responsible for translating military objectives into collection priorities, executing the collection mission, reporting back, and advising the military decision-making process.”

To me, the long-winded explanation looked more like Sullivan had led a small group of advisers alongside soldiers in combat areas than actually leading what most would consider “combat patrols.” That still took courage, so why embellish it?

I sent Schimpf everything I had from the Sullivan campaign along with my own self-directed research. Schimpf was initially reluctant to say anything about Sullivan, but eventually issued this response:

“Although Jesse Sullivan, who is not a veteran and has never been on active duty, should be commended for having worked in Afghanistan as a civilian contractor, his claim to have led combat patrols flies in the face of Department of Defense regulations and established practices. While civilian contractors may be armed and act in defensive roles such as providing security, the use of contractors in contingency operations is specifically limited in DoD Instruction 3020.41 to support operations ‘in a non-combat role.’ If Mr Sullivan wants to claim unprecedented combat leadership experience as a civilian contractor, he should identify the officer that he directly reported to while in theater in order to verify this extraordinary assertion. Otherwise, he should correct the misleading language on his website.”

Sullivan has managed to make a big splash in the Republican primary. He’s a young, handsome, made-for-TV candidate and already has way more money than any of his opponents could ever likely hope to raise. But Sullivan should probably stop digging holes that he’ll eventually have to fill himself. It’s a really bad habit and I’ve seen it fatally backfire more than once. Like I said before, there’s no need to embellish this stuff.

And, for sure, this military-combat claim needs to be cleared up right away.