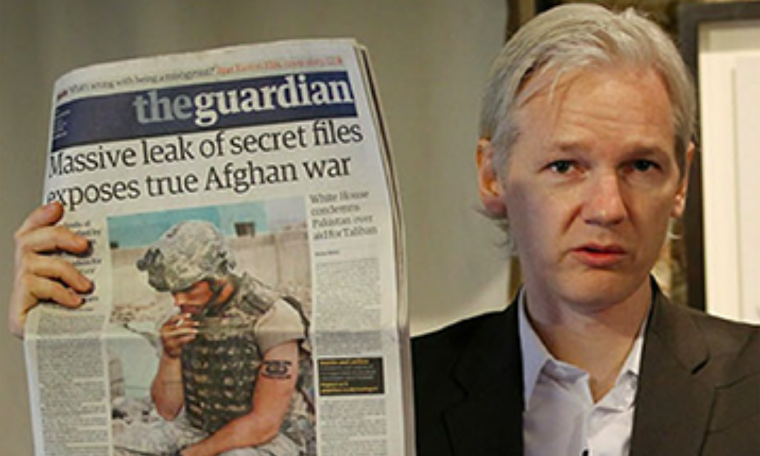 Opponents of WikiLeaks founder Julian Assange often hold up Pentagon Papers whistleblower Daniel Ellsberg as an example of someone who was responsible for a good leak. They insist WikiLeaks is not like the Pentagon Papers because supposedly Assange was reckless with sensitive documents.

On the seventh day of an extradition trial against Assange, Ellsberg dismantled this false narrative and outlined for a British magistrate court why Assange would not receive a fair trial in the United States. [Daniel Ellsberg's 8 page written statement to the court is available here.]

Assange is accused of 17 counts of violating the Espionage Act and one count of conspiracy to commit a computer crime that, as alleged in the indictment, is written like an Espionage Act offense.

The charges criminalize the act of merely receiving classified information, as well as the publication of state secrets from the United States government. It targets common practices in news gathering, which is why the case is widely opposed by press freedom organizations throughout the world.

James Lewis, a prosecutor from the Crown Prosecution Service who represents the U.S. government, told Ellsberg, “When you published the Pentagon Papers, you were very careful in what you provided to the media.”

The lead prosecutor highlighted the fact that Ellsberg withheld four volumes of the Pentagon Papers that he did not want published because they may have impacted diplomatic efforts to end the Vietnam War. However, Ellsberg’s decision to withhold those volumes had nothing to do with protecting the names of U.S. intelligence sources.

As Ellsberg described for the court, the 4,000 pages of documents he disclosed to the media contained thousands of names of Americans, Vietnamese, and North Vietnamese. There was even a clandestine CIA officer, who was named.

Nowhere in the Pentagon Papers was an “adequate justification for the killing that we were doing,” Ellsberg said. “I was afraid if I redacted or withheld anything at all it would be inferred I left out” the good reasons why the U.S. was pursuing the Vietnam War.

Ellsberg was concerned about revealing the name of a clandestine CIA officer, though he mentioned the individual was well-known in South Vietnam. Had he published the name of the officer today, the Intelligence Identities Protection Act could have easily been used to prosecute him. But he left it in the documents so no one could make inferences about redacted sections that may undermine what he exposed.

Like Assange, Ellsberg wanted the public to have a complete record.

This did not exactly distinguish Ellsberg from Assange so Lewis explicitly highlighted an article, “Why WikiLeaks Is Unlike The Pentagon Papers,” by attorney Floyd Abrams, which he wrote for the Wall Street Journal.

Abrams was one of the attorneys who represented the New York Times in the civil case that argued the government should not be able to block the media organization from publishing the Pentagon Papers. And like Lewis, Abrams fixated on the four volumes that were kept confidential.

Ellsberg insisted Abrams was “mistaken.” He never had any discussion with Ellsberg while defending the right to publish before the Supreme Court so Ellsberg said Abrams could not possibly understand his motives very well.

In the decades since the Pentagon Papers were disclosed, Ellsberg shared how he faced a “great deal” of defamation and then “neglect” to someone who was mentioned as a “clear patriot.” He was used as a “foil” against new revelations from WikiLeaks, “which were supposedly very different.” Such a distinction is “misleading in terms of motive and effect.”

Ellsberg noted Assange withheld 15,000 files from the release of the Afghanistan War Logs. He also requested assistance from the State Department and the Defense Department on redacting names, but they refused to help WikiLeaks redact a single document, even though it is a standard journalistic practice to consult officials to minimize harm.

“I have no doubt that Julian would have removed those names,” Ellsberg declared. Both the State and Defense Departments could have helped WikiLeaks remove the names of individuals, who prosecutors insist were negatively impacted.

Yet, rather than take steps to protect individuals, Ellsberg suggested these government agencies chose to “preserve the possibility of charging Mr Assange with precisely the charges” he faces now.

Not a single person has been identified by the U.S. government when they talk about deaths, physical harm, or incarceration that were linked to the WikiLeaks publications.

The lead prosecutor asked Ellsberg if it was his view that any harm to individuals was the fault of the American government for letting Assange publish material without redactions.

Ellsberg indicated they bear “heavy responsibility.”
Lewis attempted to trap Ellsberg into conceding Assange had engaged in conduct that resulted in grave harm to vulnerable individuals. He read multiple sections of an affidavit from Assistant U.S. Attorney Gordon Kromberg, who is in the Eastern District of Virginia where Assange was indicted.

It covered a laundry list of allegations: they named local Afghans and Iraqis that were providing information to coalition forces, forced journalists and religious leaders to flee, led to harassment of Chinese academics labeled as “rats,” fueled violent threats against people who met with U.S. embassy staff, resulted in Iranians being identified and outed, and spurred violence by the Taliban.

“How can you say honestly and in an unbiased way that there is no evidence that WikiLeaks put anyone in danger?” Lewis asked.

Ellsberg told Lewis he found the government’s assertions to be “highly cynical.” He invited Lewis to correct him if he was wrong, but it is his understanding that no one actually suffered harm as a result of these threats. “Did one of them suffer the carrying out of these threats?”

Lewis replied the rules are you don’t get to ask the questions. He tried to move on as Ellsberg insisted he be allowed to provide the rest of his answer, but Judge Vanessa Baraitser would not let Ellsberg complete his response.

It deeply upset Assange, who spoke from inside the glass box where he sits each day. Baraitser reminded him not to interrupt proceedings as Edward Fitzgerald, a defense attorney, attempted to convince the court that Ellsberg should be able to finish his answer.

Lewis continued, “Is it your position there was absolutely no danger caused by publishing the unredacted names of these informants?”

In response, Ellsberg said the U.S. government is “extremely cynical in pretending its concerned for these people.” It has displayed “contempt for Middle Easterners” throughout the last 19 years.

As Lewis insisted one had to conclude Iraqis, Afghans, or Syrians named in the WikiLeaks publications were murdered or forced to flee, Ellsberg refused to accept this presumption.

“I’m sorry, sir, but it doesn’t seem to be at all obvious that this small fraction of people that have been murdered in the course of both sides of conflicts can be attributed to WikiLeaks disclosures,” Ellsberg stated.

If the Taliban had disappeared someone, Ellsberg said that would be a seriously harmful consequence. “I am not aware of one single instance in the last 10 years.”

Ellsberg informed the court his motive was no different from Assange’s motive. The Espionage Act charges that Assange faces are not meaningfully different either. And, in fact, he faced efforts by the government to wiretap and incapacitate him just like Assange did while in the Ecuador embassy in London.

Ellsberg recalled that he did not tell the public what led him to disclose the Pentagon Papers because he expected to be able to testify about his motive during his trial.

When his lawyer asked him why he copied the Pentagon Papers, the prosecution immediately objected. Each time his lawyer tried to rephrase the question, the court refused to permit him to tell the jury “why he had done what he’d done.”

Federal courts continue to handle Espionage Act cases in the same manner. “The notion of motive or extenuating circumstances is irrelevant,” Ellsberg added.

“The meaning of which is I did not get a fair trial, despite a very intelligent and conscientious judge. No one since me has had a fair trial.”

“Julian Assange could not get a remotely fair trial under those charges in the United States,” Ellsberg concluded.

Kevin Gosztola is managing editor of Shadowproof, where this article originally appeared.