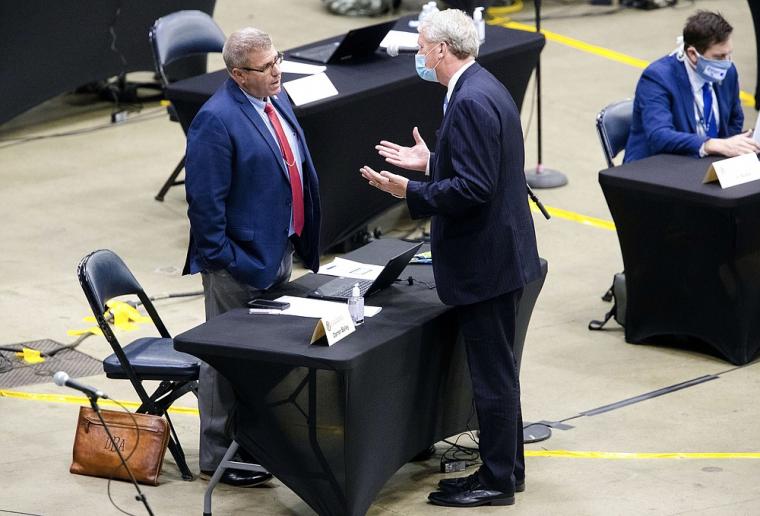 At least as far as the Illinois governor’s race goes, that now seems less likely.

As you undoubtedly know by now, Senator Darren Bailey (R-Xenia) did not appear to be gaining traction until the GOP primary battlefield was reshaped as a referendum on the former President Trump by big money pumped in from billionaire Democratic Governor JB Pritzker and Republican billionaire Dick Uihlein.

The question now is whether that Trump referendum will move down the ballot. Two polls showed a very tight Republican attorney-general primary with huge numbers of people who can’t decide between Ken Griffin-backed Steve Kim and outlandish, far-right covid attorney Tom DeVore, who has been endorsed by Senator Bailey. And Trump and Bailey have both endorsed US Representative Mary Miller over fellow Republican US Representative Rodney Davis.

And what about the state legislature?

While the House Republican Organization is formally staying out of the race in the open 87th District primary, House GOP Leader Jim Durkin has contributed $5,000 to candidate Mary Burress. And a committee controlled by Durkin ally Representative Avery Bourne (R-Morrisonville) has maxed out to Burress with a $59,900 contribution. Burress, the Tazewell County Treasurer, is running against Tazewell County Board member and physician William Hauter.

The reason I mention this is that Burress is one of the only House Republican candidates I can find who is openly touting her support for former President Trump. “Mary Burress is the pro-Trump Republican working to make Illinois great again,” declares a headline on one mailer, which also features a photo of her next to the former POTUS.

With Bailey surging and a recent Sun-Times poll showing Trump still very popular with party-members, it would seem to be a no-brainer for conservative Republican candidates to publicly attach themselves to one or the other or both in their advertising and social media posts.

Bailey has decided to take the initiative. And there are some unifying threads here: House Republican Leader Jim Durkin and the 2019 gas tax-hike that Durkin eventually supported.

"We've got a whole list of anti-establishment reformers who we're going to be endorsing in the next 24 hours," a top Bailey official told me late last week.

Included on the list is Senator Win Stoller (R-East Peoria). Stoller is up against Brett Nicklaus, who is backed by House GOP Leader Jim Durkin and others close to him.

There's no love at all between Bailey and Durkin. The two clashed often when Bailey was in the House and Durkin fully backed Irvin. Both Durkin and Irvin’s running-mate, Representative Avery Bourne, voted to double the motor-fuel tax in 2019, something Bailey often pounds home on the campaign trail as the price of gas has skyrocketed. Bailey doesn’t seem to have any ideas about how to repair and upgrade our woefully-dilapidated infrastructure without that money, but nobody seems to care.

Bailey also endorsed Republican Don Debolt over Senator Steve McClure (R-Springfield), who voted for the gas tax-increase as well. And Bailey’s backing former GOP Representative John Cabello in his race against a candidate backed by a trade union which pushed hard to raise the gas tax. Cabello voted “No.”

Kent Gray is running against Representative Tim Butler (R-Springfield), who voted with his party leadership on the gas tax. Gray has not raised a lot of money, has a thick opposition research file, and Butler hasn’t taken any chances by spending big and campaigning hard. If Bailey’s coattails can drag Gray across the line… whew.

Bailey’s also supporting Travis Weaver against Representative Mark Luft (R-Pekin), who wasn’t around for the gas-tax vote, but is backed heavily by Durkin and some unions. And he’s supporting Representative Dave Welter’s opponent Jed Davis. Welter (R-Morris) is in House Republican leadership, so you already know where he was in 2019.

That was one tough vote in 2019. It took guts to take it and I still think, despite the prices, it was the right thing to do for the state’s future. We’ll see if Bailey tries to connect those tax dots in voters’ minds or whether, as time expires, he’ll just try to win these races with his personality alone.