Collared Counties: The Illinois Electoral Math Does Not Add Up for Darren Bailey 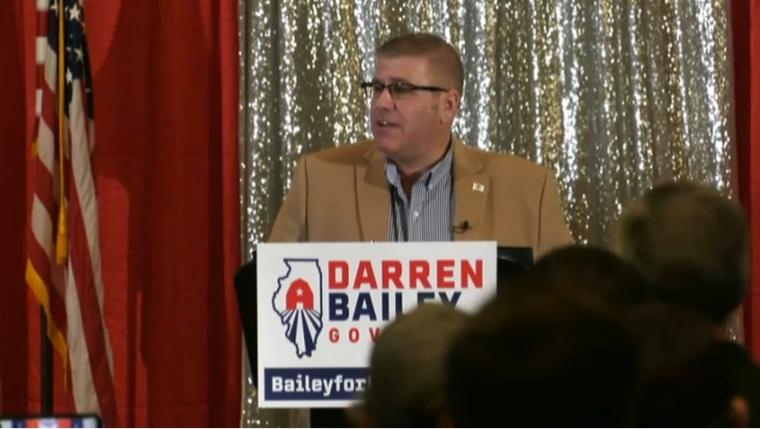 I was looking for something else recently on Scott Kennedy’s Illinois Election Data Web site and noticed he had voter-turn-out numbers from statewide races since 1990.

We all know that Downstate has lost a significant amount of its political importance, but the numbers really help illustrate this decline.

In 1990, 42 percent of the total vote for governor came from Downstate counties, while a mere 17 percent came from the suburban collar-counties outside Cook.

By 2018, just 36 percent of the total vote for governor came from Downstate and 25 percent was from the collars. When you expand the definition of the collar counties to include some in the Chicago metro region that had previously been considered more rural, the Downstate figure drops to 31 percent and the share of the collar county vote rises to 29 percent.

I happened to be talking with former Governor Jim Edgar about something else shortly after seeing those numbers, and when I brought it up, he said that, in those days, Republicans would figure on being stomped in the city, but they’d win the Cook and collar-county suburbs and then the margin Downstate would wind up being pretty close to the statewide spread.

In Edgar’s first gubernatorial election in 1990, that’s just what happened. He lost Chicago by 33 points, won suburban Cook by 18, won the collars by 27, and took Downstate by three, winning overall that year by just under 3 percentage points.

Edgar focused intently on the suburbs, campaigning on a promise to cap local property taxes and highlighted his strong support of abortion rights, among other things the voters in that region cared about.

By 2018, Chicago and suburban Cook County made up almost the same percentage share of the total vote for governor as it did in 1990, declining only by about a percentage point. The difference, though, is that the Cook County suburbs are now firmly in Democratic control. Edgar won them by 18 points back in the day, but JB Pritzker won them by 29 points in 2018. That’s a 47-point swing.

The collars have leaned Democratic during presidential years since Barack Obama’s national bid in 2008, and gradually started trending more Democratic in off-year races, culminating in Pritzker’s three-point collar-county win over Bruce Rauner in 2018 and historic county-wide Democratic wins in the region both that year and in 2020.

Downstate has become much more reliable for Republicans. No statewide Democrat except Secretary of State Jesse White has won the region for the past ten years. Obama won it in 2008 by four points, but lost Downstate four years later by seven, an 11-point flip. Pritzker lost it by 10 points four years ago.

But the increase in Republican identification in the region has not been enough to make up for its falling vote-share and the party’s more recent disadvantages in the suburbs. Pat Quinn lost Downstate by 24 points in 2010 and still managed to eke out a narrow victory, after all.

Partisan red meat works well in Downstate, and Republican gubernatorial candidate Senator Darren Bailey will likely run up his numbers there, but it definitely doesn’t work in the suburbs, and Bailey has spent much of his campaign ignoring this basic Illinois electoral math and crafting an under-funded message that, if anything, almost appears to be designed to turn away those collar-county voters. It’s impossible to win statewide by running up the score in a region which contains barely more than a third of the vote while turning off, and even firing up opposition in, the rest of the state.

Bailey’s recent “kitchen table” policy proposal is to require the University of Illinois’ flagship campus to guarantee that 90 percent of its enrollment is made up of Illinois residents.

Other states have similar requirements mainly because of pressure from parents, and many of those folks live in the suburbs.

When Bruce Rauner was governor, and universities struggled without a state budget, UIUC and other campuses were left to their own devices. The fiscal situation was only marginally better under Pat Quinn. Rauner took a fiscal crisis and turned it into a calamity.

State finances are better now, so perhaps it is time to start discussing the use of large numbers of international students to subsidize tuition for everyone else.

But on the politics side, Bailey is gonna need infinitely more than this to overcome his geographical and ideological deficits.