Despite Fumbling the Play Initially, the Democratic Super-Majority Could Still Push Their Map Through 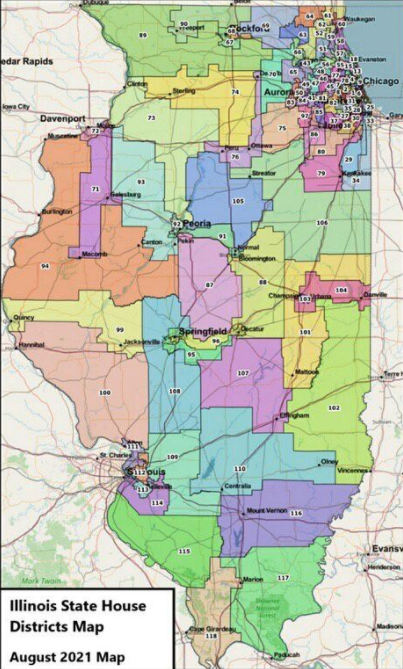 It has been a foregone conclusion since the official US Census numbers were released in August that the first state legislative-redistricting plan passed back in May would be ruled unconstitutional. And the inevitable happened last week when a federal court tossed out the General Assembly’s spring plan.

The official population data showed that the May version of the remap, drawn using the less-accurate American Community Survey data, violated longstanding federal judicial precedent that state legislative maps as a whole can have a “maximum population deviation” between districts of no more than ten percent to meet the “one person, one vote” constitutional requirement for districts. Illinois’ deviation was about 30 percent in the House and almost twenty percent in the Senate.

So the super-majority Democrats in the General Assembly had to redraw the maps in August because the Census data made it abundantly clear that there was no way the plan that was then on the books would ever withstand judicial scrutiny.

The Democrats decided to move forward in May without Census data because waiting until after June 30 would’ve triggered first a constitutionally-mandated bipartisan-redistricting commission, and then, when that commission deadlocked (as it has in most all previous attempts), a lottery would be held to choose a partisan tie-breaker, giving the Republicans a fifty-fifty chance at taking complete control of the legislative map-making process.

There were some risks to the Democrats’ strategy, though. The greatest risk (although never very likely) was that a federal judge could rule that the unconstitutionality of the initial map plan somehow triggered the bipartisan commission, which could ultimately have a chance of leading to a Republican-drawn map. That didn’t happen. Far from it. The federal judges opined last week that the demand by the Republican plaintiffs to start the bipartisan commission process was “far-fetched” and the proposed remedy was legally “implausible.”

Instead, the federal court decided that the revised-remap plan passed in August and signed into law in September would henceforth be used as a “starting point” in the process for approving a new redistricting plan.

The court also “invited” the plaintiffs (Republicans and the Mexican-American Legal Defense and Education Fund) to submit their own alternative maps accompanied by statements explaining “the constitutional or statutory defects” in the Democrats’ revised map and an explanation of how their revisions or alternatives “cure” the alleged defects. The Democrats will then be provided an opportunity to respond.

So far, it’s not a horrible outcome for the Democrats, who feel confident that their revised-remap plan will withstand judicial scrutiny, and which has so far not been changed one iota. And, despite what you might have read elsewhere, the court did not yet declare that the revised-remap plan is in need of being changed. All it said was that the revised remap is basically now up for debate. Since petition circulation doesn’t begin until January, there is quite a bit of time left to wrap this up. And if it can’t be wrapped up quickly, the General Assembly (or perhaps a federal judge) could change the circulation, filing, and voting-timelines.

This also means, of course, that the Republicans and the Mexican-American Legal Defense and Education Fund are still very much in the game. They have an opportunity now to present and prove their cases. And if they fail, a federal lawsuit was filed this month by the NAACP claiming Black voting-strength in the East St Louis-based House district was diluted to help neighboring white legislative Democrats hold onto their seats.

One other item of interest. The court noted last week that the plaintiffs allege the newly-revised maps were approved “a single day after publicly releasing any version of its amended map and within hours of releasing the version that it enacted into law.”

The judges then went on to say, “Defendants may well disagree with those characterizations, and we need not (and do not) do more than to note them at this time.”

So maybe the super-majority could take a hint from that oblique warning and not jam through the congressional-remap plan in a day this week.