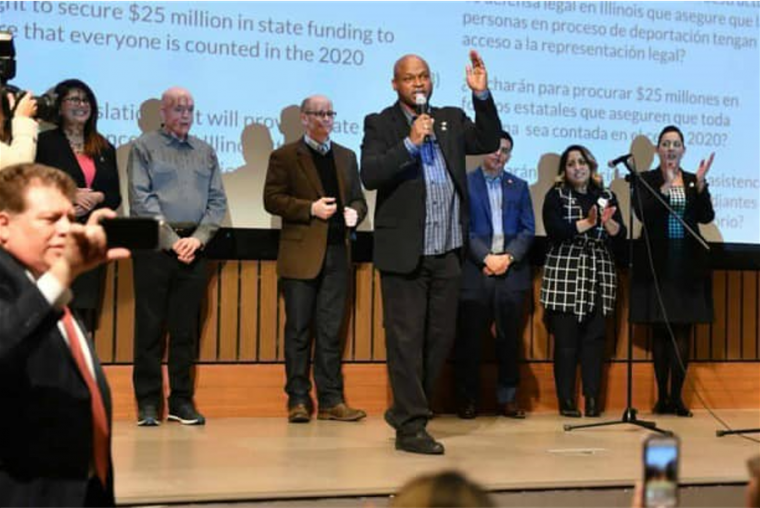 The state party chair, U.S. Representative Robin Kelly, is barred by federal election laws from participating in any fundraising or spending of money that is raised outside the federally-regulated campaign system. So with direction from the FEC, the state party cobbled together the BLUE (Building Leadership, Unity, and Equity) Committee to oversee that activity and insulate Chair Kelly from possible legal violations.

The committee has five members, two of whom would be the Democratic leaders of the House and Senate. But Speaker Welch has said for weeks that he had concerns about whether the new committee actually followed federal law, and had his own issues to deal with as a new chamber leader ahead of a re-map election year. So, he wouldn’t be participating and wouldn’t be appointing a proxy.

The state central committee met last week to vote on the bylaw change and Senator Cristina Castro (D-Elgin), a member of the central committee, said she had spoken with Senate President Harmon earlier in the day and he told her he would also not be serving on the new committee because he believed the structure was “problematic.”

Former Senate President John Cullerton, who is also a member of the state central committee, spoke against the proposed bylaw change as well. Cullerton warned earlier this year that electing Representative Kelly as state party chair would open up a can of legal worms, and he agreed that the committee’s structure was problematic. He and Castro also noted that, since Harmon and Welch wouldn’t be participating, the committee would only have three voting members.

But Bill Houlihan, a central committee member who was US Senator Dick Durbin’s top guy in Springfield for years until his recent retirement, disputed the notion that Harmon had any problems with the committee’s structure, saying he’d spoken with both Harmon and Welch and they “indicated to me that they were trying to find a way to make this work.” He also dismissed criticisms of the committee by Castro and Cullerton and said the language was only a “first step” and could be amended down the road.

Asked whether Harmon viewed the BLUE Committee’s structure as “problematic,” a Harmon spokesperson directed me to Senator Castro’s statement during the meeting — which is a clever way of confirming her claim without directly doing so. And that means Houlihan may have not correctly characterized his conversation with the Senate President.

But Harmon’s person also said that the Senate President plans to be “helpful to Democrats up and down the ballot.” Welch’s people have issued similar statements in the past.

The new bylaws passed with seven of the central committee’s 36 members voting against it. Former Speaker Michael Madigan and a few others did not attend or approve proxies.

Houlihan was subsequently elected to a spot on the new BLUE Committee and said after the meeting that he had no plans to be the committee’s chair.

The reality is, the most powerful Democrats in the state are not part of this process, including the billionaire governor, who supported Chicago Alderman Michelle Harris for chair against Kelly earlier this year. Asked by a central committee member during the meeting why the governor wasn’t included on the BLUE Committee, Kelly went out of her way to make it clear that “I don’t have issues” with Governor JB Pritzker. “I’ve been above-board, graceful,” she said.

Senator Durbin was solidly behind Kelly’s election as state party chair, which exacerbated the tensions between Durbin and Governor Pritzker that have existed since the 2018 election.

Durbin also built up the Illinois Democratic County Chairs' Association from basically nothing, as a counterweight to then-Speaker Michael Madigan’s Democratic Party of Illinois machine. It’s likely no coincidence, therefore, that Pritzker didn’t attend the IDCCA’s annual brunch event on Governor’s Day. He initially said he wouldn’t attend because the group was holding a large event indoors, but when it was moved outside, he said he’d already made other plans. Okay.

The rift will matter if campaigns suffer, but the state party has always been mainly a pass-through mechanism to obtain direct-mail discounts, and the IDCCA is never a gigantic factor. So I’m not yet sure that anything will truly suffer as long as the billionaire is spreading cash around and the two legislative leaders bring in big bucks.