Does Chuy Garcia Have the Brass to Grab Mike Madigan’s Mantle? 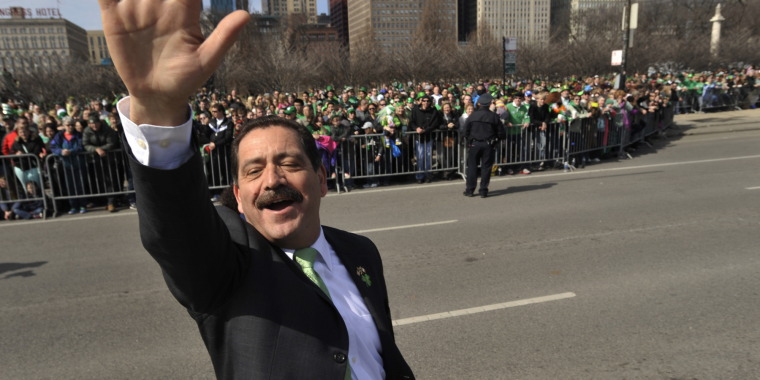 With the announcement by Representative Bob Morgan (D-Deerfield) earlier this month that he will not vote to reelect Illinois House Speaker Michael Madigan in January, the opposition numbered eight House Democrats, with at least a few more privately leaning their way.

They’ll need 13 or 14 Democrats, depending on final general-election results, to deprive Madigan of the speaker’s gavel. So, they may need some help to get over the hump.

And there’s one person outside the House who may have enough votes to tip the balance either way.

And, no, it’s likely not Governor JB Pritzker. Not yet, anyway.

Governor Pritzker controls no votes in the House. He can’t just push a button and make something happen in that chamber.

Perhaps if he had followed through on his 2018 promises to supplant the moribund state party with a true statewide political organization for all Democrats at all levels, he might have some buttons to push. But he didn’t, and the pandemic intervened, and here we are.

Whatever the case, a governor directly confronting the House Speaker has never worked here. Others have tried. All have failed. A governor’s opposition would, as it has in the past, give Madigan something external and concrete to push back against in order to distract from his internal problems.

And if Pritzker’s effort to dislodge Madigan failed, so would the remainder of his legislative agenda. Not to mention that Pritzker certainly hurt himself when he not-so-subtly threw resources Senator Kimberly Lightford’s way during her unsuccessful run for Senate President almost a year ago. Once bitten, twice shy.

There is definite pressure on Pritzker to act, though. As the saying goes, “governors own,” so he’ll wear the jacket in 2022 if Madigan is still standing and remains as spectacularly unpopular as he is today.

Maybe Pritzker could quietly do something at the very end to make it happen if the opposition is still slightly short, but don’t expect anything before that unless something major happens with the federal investigation into the House Speaker’s operation. But if Pritzker swings and misses, Madigan will still be around, Pritzker won’t get anything accomplished, and the voters will not be pleased.

The dude spent a zillion dollars to get elected governor only to find himself in a dozen trick bags. Welcome to Illinois!

The one person outside the House who could make a real and immediate difference is US Representative Chuy Garcia. As I’ve told you before, Representative Garcia, the Chicago Teachers Union, and Madigan came to an understanding not long after Garcia, with the CTU’s backing, lost the city mayor’s race in 2015. Madigan’s 13th Ward carried Mayor Rahm Emanuel to victory, but that took an extraordinary amount of work in Madigan’s Latino-dominated area. Better to just cut a deal.

Since then, one after another of Garcia’s close allies have been elected or appointed to the General Assembly.

There are probably no better examples of this than in Madigan’s own neighborhood. Garcia ally Celina Villanueva was appointed to the House in the summer of 2018 when Madigan loyalist Representative Silvana Tabares was appointed to the Chicago City Council in the neighboring 23rd Ward. Representative Villanueva then ran unopposed in a special election to replace resigned Senator Martin Sandoval (Madigan’s Senator), and Garcia’s congressional aide Edgar Gonzalez was appointed to Villanueva’s House seat. In between, Madigan successfully supported another Garcia staffer for a Cook County Board slot over Sandoval’s daughter.

Garcia has significant influence over at least three Chicago Democratic House members (Gonzalez, Aaron Ortiz, and Delia Ramirez). But if he makes a strong statement either way on Madigan, several other progressives in the chamber could very well follow his lead.

Garcia, by the way, is also a member of Madigan’s state party central committee. A few committee members have spoken out against Chairman Madigan, but Garcia has a stronger political organization and a larger public platform. He could make a real difference there, too.

But a deal is a deal and, in the long term, Garcia has the better end of it. Madigan gets peace and Garcia gets more of his people into influential positions every time there’s a path (or close to it, like when Madigan tried unsuccessfully to block Eva-Dina Delgado’s appointment to the House this year after Garcia and the CTU supported someone else).

And that probably explains why Garcia isn’t returning my phone calls and texts these days to explain what he’s planning to do about all of this.