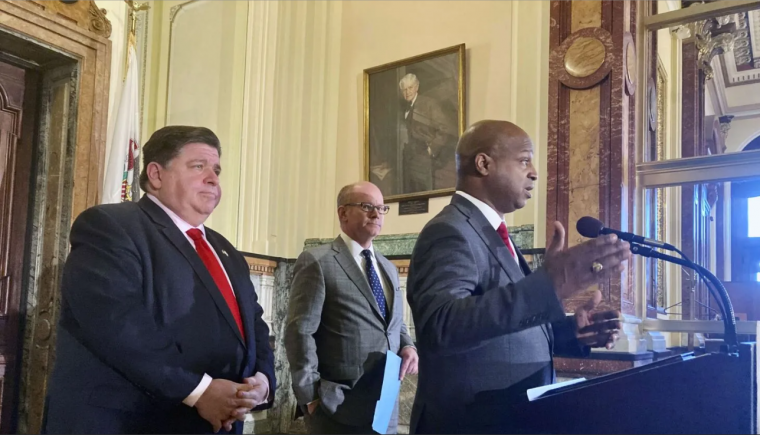 Last year’s state budget talks were dragged into the bitter fight between the Senate and the House and the governor’s office over a massive bill to regulate carbon-based power plants. As a result, the House hurriedly and angrily jammed an appropriations bill over to the Senate before it could be fully checked for accuracy. Both chambers had to return during the summer to fix the mistakes.

And a week before the end of this year’s spring session, tensions started showing again.

Top House Democrats and people in the governor’s office said they were blind-sided when the Senate Democrats unveiled a $1.8 billion temporary tax-cut package during a late Friday-afternoon press conference.

The Senate Dems apparently wanted to lay down their marker before the House — which had not by then proposed its tax cut plan outside the governor’s temporary $1 billion tax-cut proposal in February — reconvened the following Sunday afternoon.

But the rancor quickly eased because people began talking to each other. The House unveiled its own $1.4 billion temporary tax-cut plan by Wednesday, and the talks began in earnest.

“The last 24 hours have been a virtual model of cordial negotiation and give and take,” marveled a high-level official in Governor JB Pritzker’s administration at the beginning of the following day. By that afternoon, a deal was announced.

Elements of all three plans made it into the $1.8 billion tax-cut deal.

The centerpiece of the Senate’s plan was sending individual-filing tax-payers a check for $100 and joint filers $200. The final agreement cut that amount in half but doubled the per-child level to $100, from the Senate’s proposed $50, and lowered the top income threshold.

The Senate also proposed expanding the state’s Earned Income Credit, which was not in the governor’s original tax-cut plan, and the House pushed the expansion further to include a permanent expansion, which is in the final proposal.

State revenues have continued to strengthen at an unforeseen pace. The revised estimate projects revenues for the remainder of this fiscal year and next fiscal year will come in $2 billion higher than projected before the governor’s February budget address. So, the decision was made to increase the tax-payer give-backs.

That new revenue also allowed the state to sweeten the pie for credit-ratings agencies by increasing the governor’s proposed $900 million contribution to the state’s essentially empty “rainy-day fund” to about $1 billion.

The state’s pension funds will receive a $500-million boost above and beyond the required contribution, which is equal to the governor’s original plan. If the state doesn’t get another upgrade after all this, then I have no idea what it’ll take.

And there will be about $200 million in additional spending to “support public safety measures, invest in the tools law enforcement needs to prevent and solve crimes, and strengthen investments in violence prevent programs that keep communities safe,” according to a press release.

So is this an “election-year budget,” as the news media has noted again and again?

Of course it is.

I mean, the state’s majority party is engaged in an off-year election contest with enormous national anti-Democratic headwinds. The governor goes before the voters this fall, possibly against someone backed by a richer guy than he is. All state legislators are up and they’re all running in newly-redrawn districts with significant numbers of constituents who don’t know a thing about them. It would be absolute political malpractice if the Democrats let this opportunity pass them by.

And frankly, refunding likely one-time surplus money to tax-payers while also bulking up reserves, shoring up state pension funds, and paying off other debts is standard procedure in well-run states. Scream “Politics!” all you want. You’re totally right. But good government is, as someone once said, good politics, and that was most definitely the mantra of the day.

But is this really good government? I’d prefer using all that extra revenue to further shore up the state’s pension funds. The state is missing out on a huge opportunity.

Then again, I don’t have to run for re-election this year. And, notably, the Senate Republicans’ budget proposal did not once mention the pension funds, state debt, or the rainy-day fund. Instead, they proposed using likely one-time revenue-spikes to fund permanent tax-cuts, which could create a fiscal disaster when the economy eventually falters. They could play that game because they knew their proposal has no chance of passage, all the while claiming that the other side is engaging in politics like they’re somehow immune to the charge. Same goes for the House Republicans, who called the agreement both unaffordable and inadequate.