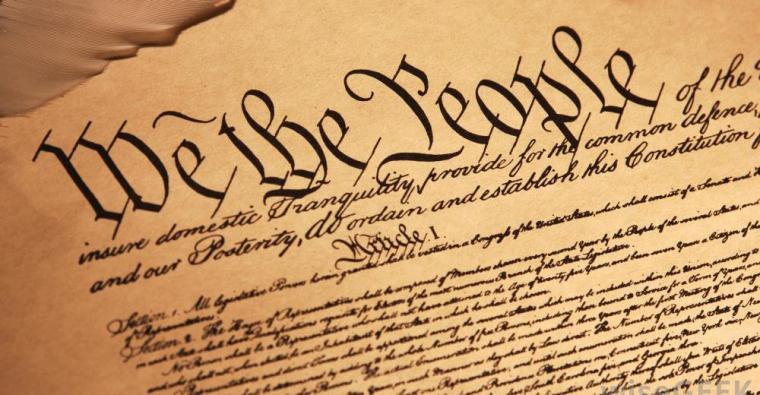 What is it that makes America, since its founding, the preferred destination of so many of the world's inhabitants? Americans' responses to this query vary greatly, but in 2017, nearly all can be viewed through the political prism of liberal versus conservative, progressive versus Libertarian, or simply left versus right (the legitimacy of which will have to wait for another day).

The response should be universal: the rule of law applied equally to all – in theory, anyway.

America was founded as a constitutional republic, with protection of inherent property rights as government's core function. Three equal branches of government were established as a checks-and-balances system to prevent government overreach: the Legislative Branch makes the laws, the Executive Branch enforces the laws, and the Judicial Branch ensures the laws and their enforcement conform to the Constitution.

What is too often overlooked in this equation, arguably abandoned, even though supreme in its critical role for our governance, is the absolute power of “We the People” to hold the Branches accountable to the respective responsibilities each Branch is tasked with.

In our Constitutional Republic, the citizenry still has the power and political tools to create whatever change we truly desire as a Republic. Alarmingly, however, we have lowered the bar for our participation so far that 'We the People”'s role in governance is almost obsolete. Coalescing now, to right our country's ship, is unachievable if we don't first acknowledge systematic displacement due to our willing abdication of our civic roles.

If you are paying attention at all, you can't help sensing the unrelenting efforts by news media to trigger emotional responses to information, especially broadcast and radio news. Using strictly scripted news bytes, short homogeneous news segments that repeat not just within each segment of one channel, but within nearly all segments across channels regardless of political slants and/or biases, information remains intellectually limited and disparate. An example of a pattern of content includes presenting a deeply disturbing news story, immediately followed by light, fluffier fare, followed by a commercial break, evoking in viewers/listeners an emotional roller coaster.

No single topic is ever pursued more than a few minutes, easily convoluted by a panel of people with differing views who are each given a matter of seconds to weigh in. Notice the panels consist of many of the same people across segments, who make repeated appearances over time, and with questionable credentials for conveying meaningful information on ranges of topics.

Such content-delivery tactics ensure no meaningful gains are made by consumers for better understanding the topics presented, especially since the panels' contributions are almost always guided speculation, void of any evidence or hard facts backing their opinions. By design, many guests opine with distinct biases and language that incite emotional responses from viewers/listeners.

This strategy also allows for redundancy of topics over weeks, even months, by promising new information, but rarely actually delivering. The scripts change ever so slightly week-to-week to give the impression of expanding on the topics. Most consumers detect these manipulations, yet continue to tune in because, emotionally, they relate to the content without hesitation. Like-minded news coverage is comfortable, non-stressful, and provides a sense of belonging. Ratings stay up, and the covert mission of compromising the public with ever-decreasing relevant news is advancing, thereby ultimately protecting the status quo.

News most often consists of very general headlines with only vague implications and/or consequences. The meat of the story is largely conjecture, conveniently leaving the network free from any real liability for misinformation. Today's news is highly formulaic, speculative, distressingly sans reliable research and the much-needed connective tissue that would make it genuinely meaningful to/for consumers in their daily lives.

Instead, media organizations opt for perfecting predictive outcomes. Behavior science and decades of research on behavior modification have proven that emotional responses are far more penetrating and difficult to alter once impressed. Deliberately creating cognitive dissonance (a conflict between new information and established knowledge or beliefs) to trigger and enhance emotional responses can consistently be seen in news content delivery to confuse and disorient immediate mental cognitive responses to what is being seen/heard, in favor of emotional ones.

The way to resolve cognitive dissonance is to deploy critical thinking techniques that question the new information; explore the conflict(s) asking why, what, when, where, who, how, etc; investigate possibilities, identify relationships, and connect dots by finding the commonalities and distinguish the differences. These and other critical-thinking techniques can be exhaustive, or occur within minutes of consideration, depending on how familiar one is with healthy skepticism in discourse and discovery.

But one thing is non-negotiable for critical thinking success: facts must be resolute, backed by hard evidence. Opining has no reliable place in resolving cognitive dissonance. In fact, anything less than evidenced-backed conclusions should be rejected outright relative to any position that impacts resolution of issues, reliable decision-making and pending implementation, not to mention credibility, merit, and trust.

Political discourse today is comprised of far too many highly-charged emotional memes rather than original dialogue and debate stemming from evidence-based research. Too many of us haven't a clue where the facts stop and the guided speculation begins. Regardless, fact-less speculation has replaced hard news backed by irrefutable evidence – the gold standard in journalism that has been abandoned to our detriment as a society.

We had better rethink this witless path because it has no future in a constitutional republic. We have already abdicated far too much of our political muster, and is beginning to also corrupt “We the People”'s commitment and adherence to the rule of law. If we forsake this core governing pillar, blaming anyone and everyone but ourselves for its degradation, then we deserve governance by some totalitarian regime that considers its people its subjects.

Consider the following: How have Americans permitted the systemic dumbing down of information in both media and academia? When did it become acceptable for guided speculation to replace evidence-based analysis of domestic and world events? Where was the multitude of media professionals' rebellion against news editors' and corporate leaders' gross negligence rife throughout news content in the last two decades? Who collaborated to influence media consumers via emotional triggers to establish biases, loyalties, and predictive responses? And why would consumers willingly succumb to such manipulative behavioral constructs, compromising arguably the most essential aspect of our constitutional republic, not only for continuing civil and political liberty, but also as a people evolving along a time continuum?

In America, freedom is an inherent right, but it requires vigilance, discipline, respect for, and adherence to the constraints that protect it. Our Constitution does not bestow our rights upon us, nor grant us our rights by decree. Our rights are inherent, organic, and accrue to us as part of our humanity. Each of us is endowed by our Creator with these rights. We possess them whether government exists or not.

Modern Americans have all but lost this truth. It is no longer taught in our schools, nor do most parents or grandparents secure this profound legacy of America's founding by teaching it and ingraining it into their children and grandchildren. Be clear: Our Constitution does not grant rights. It is a limiting document that limits the government's ability to intrude upon our God-given rights by specifically enumerating what the government can and can't do. Any government overreach, and there is a ton of it, only occurs by our silent consent.

It's time to totally reject any news or information that cannot be verified by evidence. Period. Non-negotiable. We must get back to a seriously healthy national skepticism, using critical thinking to challenge the status quo with real solutions. It's time to stop tolerating the intolerable from our public officials. Congress and the excessive bureaucracy have taken advantage of our apathy long enough.

In other words, it's time to get busy participating with maximum effort to sustain and protect what God provided each of us inherently, and for which the founders of this particular Republic wisely codified via our Constitution in rare clarity of purpose and belief in man's potential.