Give Repurposing I-74 Bridge Toll Plaza Idea a Fair Shake 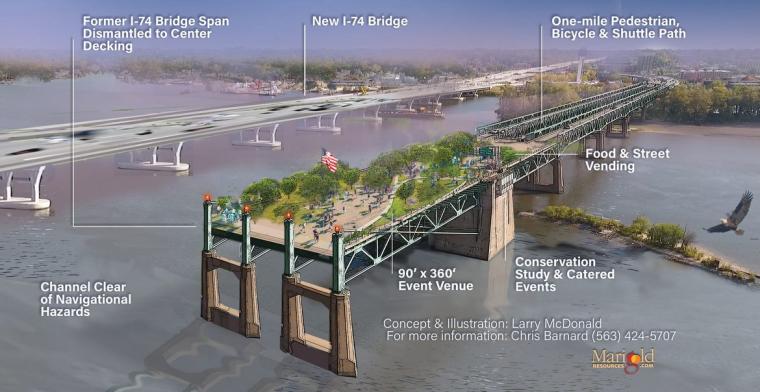 When Marigold Resources' branding and agribusiness adviser Larry McDonald came up with the idea to re-purpose the portion of the I-74 Bridge that used to house the toll plaza operations into an elevated park on the Mississippi River, his concept rendering (pictured above) was posted to several social-media and LinkedIn accounts.

It received thousands of views and engagements, and hundreds of comments.

Plenty of observers commented how fabulous it would be to provide such an unprecedented access to and experience of the Quad Cities' number one asset. Who knew the original I-74 Bridge is also a memorial to veterans of four foreign wars? The online detractors dutifully cast the concept aside as frivolous and commented "Who was supposed to pay for this, the beleaguered tax payers . . . again?!"

Barb Ickes, a longtime I-74 Bridge documentarian, opined in the daily papers in February that this was a good idea, but too late. And a local TV station picked up on the social media buzz to run a story echoing the apparent party line, "Good idea, but don't hold your breath."

What did not get reported was this conceptual trial balloon never proposed that repurposing and maintaining a piece of our bi-state region's history and infrastructure would rely solely on public funding.

This region has immense private wealth and significant expertise and resources to realize and sustain such a bold idea.

And if open-minded due diligence proves re-imagining a major piece of infrastructure can leverage more-meaningful-engagement-with-the-river-for-all than destroying it, Marigold stands ready to assist in making the ask.

Nothing ventured, nothing gained.

Jeff has been working on this concept (unbeknownst to Marigold) for two years. He has a load of research and has spoken to more people involved in local, state, and federal government than anyone else.

Jeff saw Larry's rendering in the news and connected with Marigold to share his white paper, which we've re-printed below. Once Jeff and Larry met and compared notes, it was evident to me once again that the Quad Cities has experts and visionaries right in our own backyard.

And after reviewing the financial data and insight he's gleaned from his exhaustive research, it's also very evident this big idea is worthy of a fair shake review. Doing a fair shake review is a low-risk exercise, with a potentially high reward for this region.

Big picture, we know the following to be accurate:

Marigold will be hosting an organizing meeting for a Fair Shake Task Force. This will include Jeff Moore's presentation of his research as well as new conceptual renderings from Larry McDonald with more details about access, usage, views and spectacularly inspiring drone videos.

We know there are challenges with permitting and timelines. There's also a window to surprise ourselves if we want to. Jeff Moore has done a yeoman's job of establishing a baseline of facts and contacts that we're wagering will intrigue the Quad Cities' leadership to take a second look. Thank you, Jeff Moore!

The Mississippi River is the #1 asset that sets the QCA apart. – Q2030 Regional Action Plan and Big Table survey results

What if... no guarantee, but there is potentially up to $4 million in funding available to preserve the old I-74 bridge as a pier leading to a large pedestrian plaza – 90 feet wide by 325 feet long – that creates an elevated park 60 feet above the middle of the river with commanding 360-degree views (and restrooms below deck)?

What if... this mid-river elevated park would create an amenity and an attraction for picnics, walkers, runners, cyclists, skaters, and tourists that is utterly unique in the QCA, or anywhere else along the entire Mississippi River?

What if... this large elevated mid-river park/plaza would be one of the crown jewels of the QCA river experience?

What if... this idea, and potentially up to $4 million to pay for it, is real?

THE IDEA: Preserve a single span on the Illinois side that’s 23' wide to create a 1,300-foot pier leading to the 90' x 325' plaza (the old toll plaza). A gleaming glass riverfront elevator (or alternate access structure) would provide access that connects to the downtown Moline riverfront and the Ben Butterworth Parkway, creating a recreational attraction for walkers, runners, and picnickers; a mid-river park large enough to accommodate festival events; a unique landmark for residents and visitors on the new I-74 corridor; and a must-see attraction in any QCA or regional visitor guide.

THE $4 MILLION: According to Iowa DOT, right now, $22 million (88.5-percent federal and 11.5-percent state) is parked in a bank account for the demolition of the old bridge from shore to shore. Of that amount, $8 million is earmarked for the two spans approaching the toll plaza from the Illinois side, or $4 million for each span. We also know that, in other cities with other bridges, demolition money has been repurposed for preservation, if the affected community so desires. So, in theory, if $4 million could be saved by saving one span, that money could be redirected to preservation of the remaining span. That would be enough for a $2 million glass elevator (like the one in Bettendorf for the new bridge, or an alternate access structure like a switch-back promenade) and the remaining $2 million could provide safety railings and other improvements to open the pier/plaza to pedestrians.

THE HISTORY: In 2003, when the QCA was offered the old bridge as a gift, the community was suffering from "bridge fatigue" after 20 years of planning for the new bridge. There was never any consideration for saving a portion of the old bridge as a pier/plaza. Today, there is a new and heightened appreciation for the river as the number-one asset that sets the Quad Cities apart. The city of Davenport is exploring a $53 million plan for parks and walking spaces on its own riverfront. And Moline is wondering what kind of attraction it can offer on its own downtown riverfront after the old bridge is demolished. Is it worth taking a second look at the giant, soaring pie, and plaza that's already there? It’s worth in excess of $53 million, can never be duplicated, and soon will be headed for the landfill. This decision will impact us for years to come because, whatever we decide, the pier/plaza is a singular opportunity that we'll never see again.

ACTUAL COST OF ONGOING MAINTENANCE: A small engineering study would be required, but ongoing maintenance costs for one quarter of the old bridge for pedestrians would be far less than the DOT estimate that was offered in 2003, which was for continued maintenance of the entire bridge as an interstate highway. Iowa DOT says the bridge is up-to-date with all structural maintenance to safely carry 75,000 cars and trucks a day, and the load-bearing requirements for pedestrian use are much less. For an eye-opening, real-world example of the cost of converting for pedestrian use, see the Chain of Rocks Bridge at the top of page seven.

WHAT ABOUT THE PEDESTRIAN PATH ON THE NEW BRIDGE?

An excellent interstate pedestrian path was added to the new bridge. At the time, it was designated as the alternative to saving all of the old bridge from shore to shore as an interstate walkway. But almost all of the facts are different today. 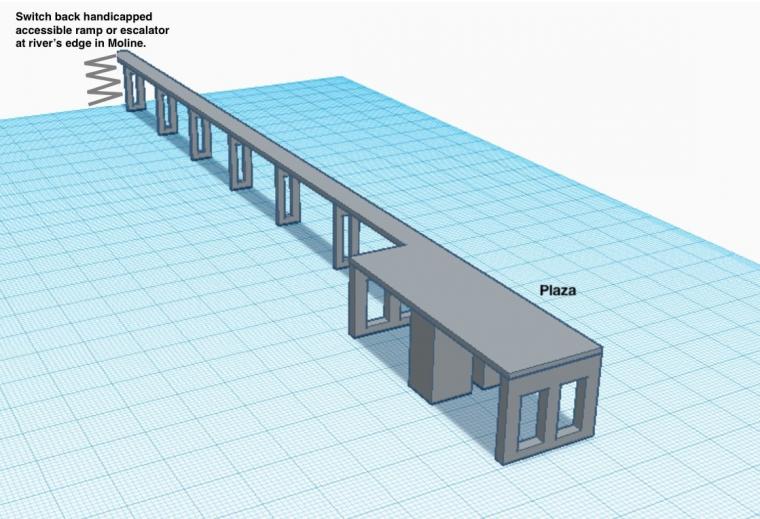 The pier begins at the Moline riverfront and is accessed via glass elevator, escalator, and/or switchback ramp/stairs from the Ben Butterworth Parkway. The pier extends 1,300 feet over the water, ending at a park-like plaza that is 90 feet wide, 325 feet long, and 60 feet above the water in the middle of the river. There are unique views in all directions, places to relax, restrooms below deck, and the best view in the QCA of the new I-74 bridge – including its show of changing multi-color LED lights every evening. Below deck, there are 2,800 square feet of offices, restrooms, and storage. 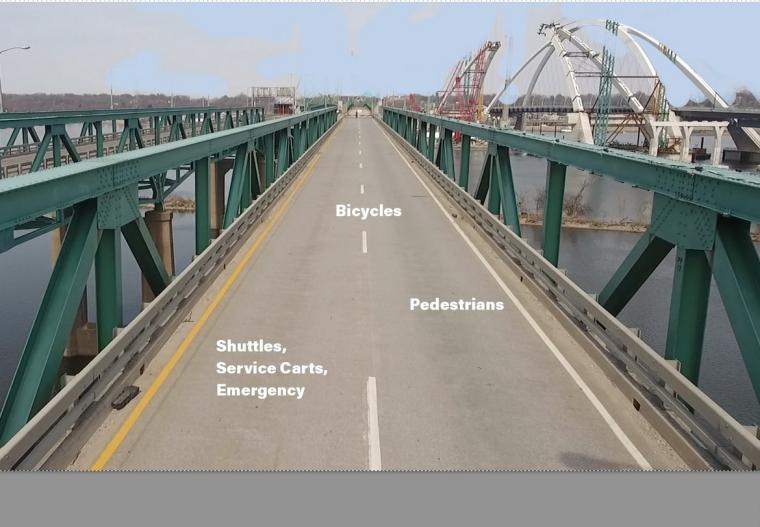 View along a single span of the old bridge, which would be the pier, showing visibility through trusses, side railings, and electrical with street lights. The side railings would have to be modified to meet safety standards. 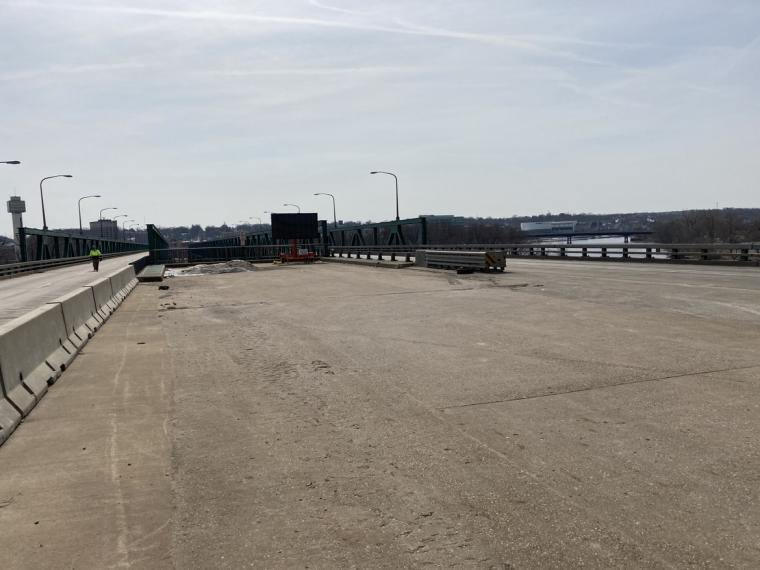 View on the toll plaza, where the trusses drop below the deck, opening up a clear 360-degree view in all directions. The side railings continue, as well as electrical. 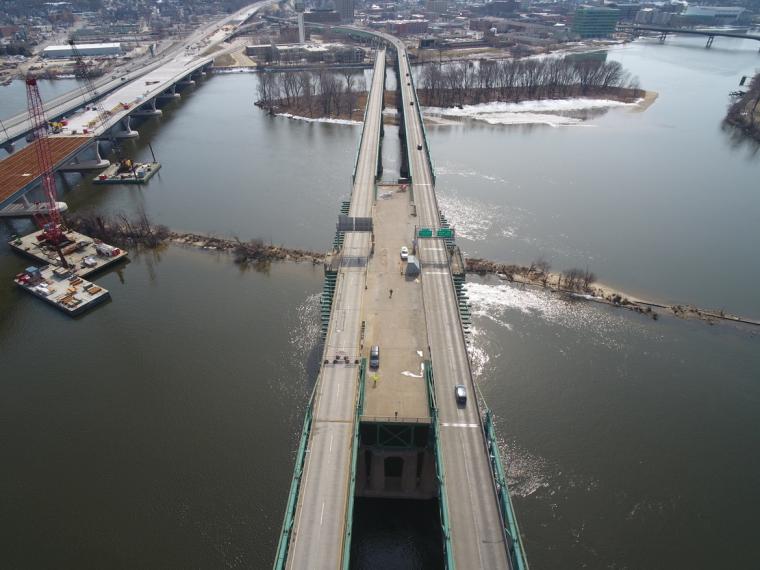 Drone photo showing footprint of the new bridge relative to the pier/plaza. Also a good view of the large, open toll plaza as it exists today, and how the pier also crosses over a wooded island. 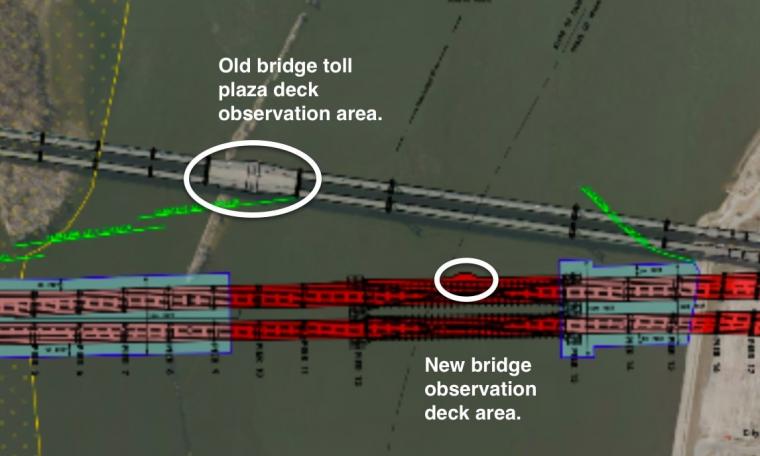 DNR schematic to scale of both bridges. Also relative size of plaza on old bridge and observation deck on new bridge, which appears as a small red semi- circle.

Rendering showing relative positions of bridges side by side. The entire suspension portion of the old bridge would come down, leaving unobstructed views of the architectural beauty of the new suspension bridge. 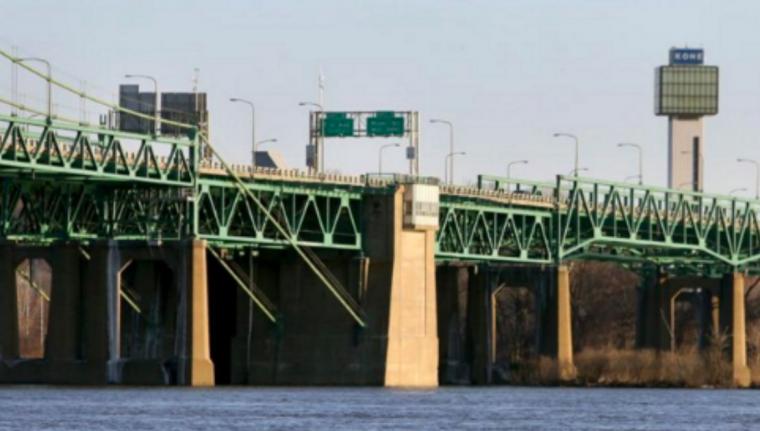 Water view showing the massive concrete pier under the middle of the old toll plaza which contains the old restrooms and offices below deck with plumbing and electrical. (Also good view of how the trusses drop below deck on the plaza, opening the view.)

The New I-74 Bridge Pedestrian Experience 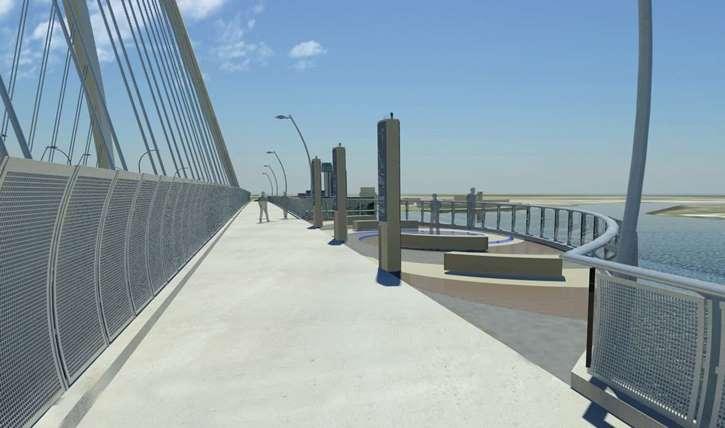 Rendering of 14-foot wide pedestrian and bike trail, creating an interstate walkway between Illinois and Iowa. The overlook is located a short walk from the Iowa side, which is accessed by a glass elevator. Shown with no vehicle traffic.

Relative size of overlook. Shown with no vehicle traffic. 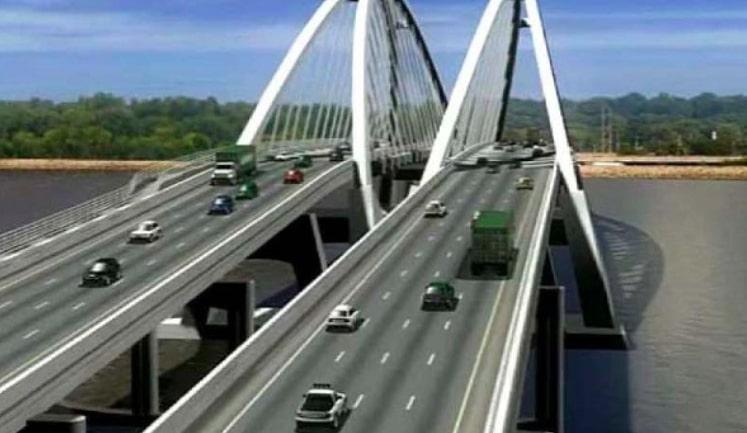 Rendering of 8-lane interstate highway with traffic. Pedestrian walkway can be seen attached to the left (Illinois-bound) side. The new bridge will be the busiest highway in the metro area, projected to carry about 100,000 cars and trucks per day by 2035.

For comparison, the photo above is the Golden Gate Bridge. It carries 112,000 vehicles per day and has a pedestrian walkway alongside the highway.

Compare This Idea to Other Successful Bridge Repurposing Projects 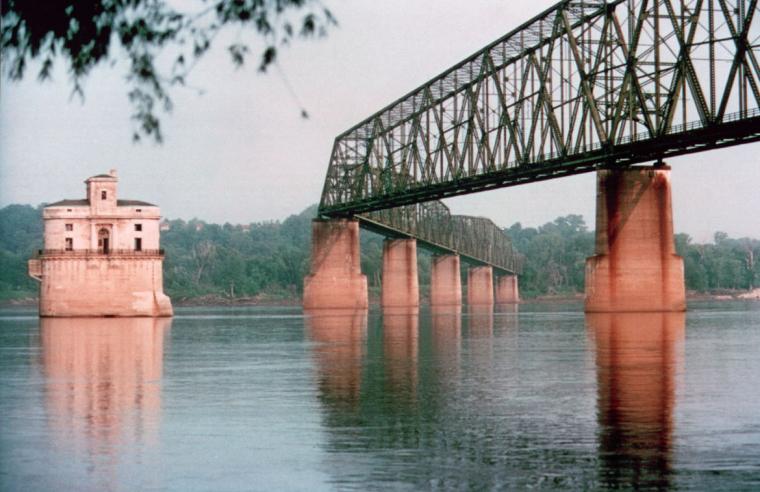 Chain of Rocks Bridge is a two-lane roadway bridge a mile long (built 1929) outside the city of St. Louis that was abandoned/ dormant for 30 years with no maintenance. Total cost of repairs to re-open for people and bikes in 1998, as part of the Mississippi River trail system, was $2 million (in 2019 dollars) which covered the engineering study, two miles of hand railing, spot repairs of the road deck, spot repairs beneath the deck, electrical and other miscellaneous costs. 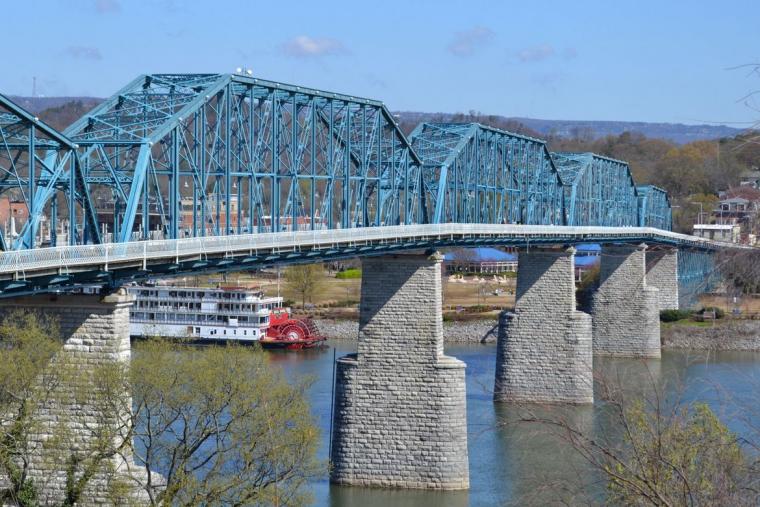 Walnut Street Bridge in Chattanooga is 2,375 feet long. Abandoned and then demolition funds were repurposed to preserve and restore the bridge for pedestrians.

Walkaway over the Hudson, a former railway bridge, was abandoned for 35 years before it was restored for a 1.25-mile pedestrian bridge in New York state. 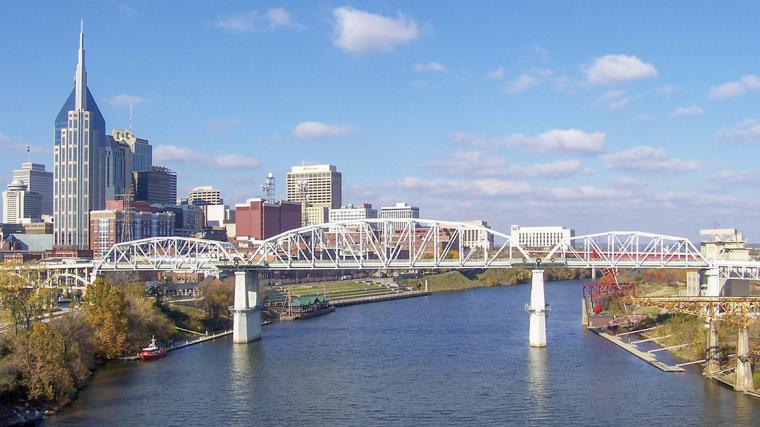 John Seigenthaler Pedestrian Bridge is 3,150 feet long in Nashville. Abandoned for safety reasons because it was in such poor repair, it was restored as a pedestrian pathway and park.

Jeff Moore is a journalist and filmmaker living and working in Rock Island, Illinois.