Godfathered: No Aide of Michael Madigan Need Ever Fear Sleeping with the Fishes 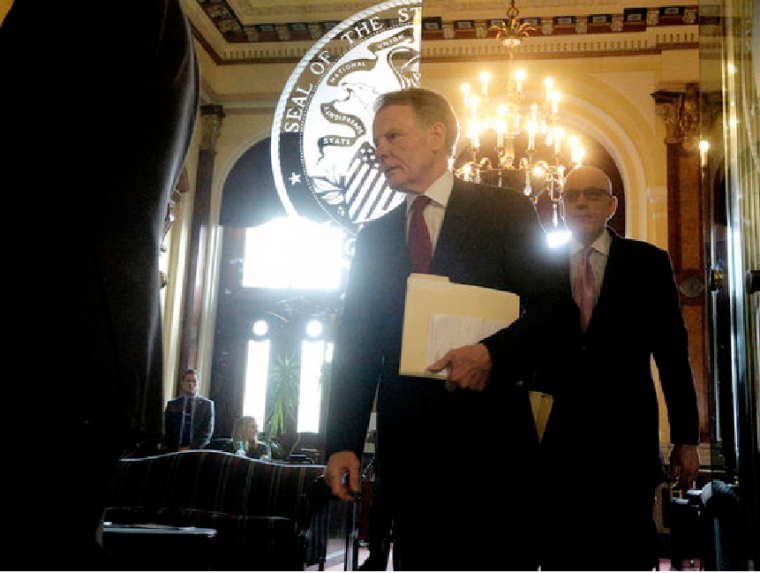 When Illinois House Speaker Michael Madigan announced in February 2018 that he'd fired Kevin Quinn, the brother of Marty Quinn, Madigan's 13th-ward alderman and political general, he said he made the decision because of Quinn's "inappropriate conduct" with Alaina Hampton, a political consultant whom he called a "courageous woman." Hampton had come forward with allegations of sexual harassment by Quinn and retaliation by Madigan's organization.

But Speaker Madigan also said at the time that Quinn had failed to "exercise the political judgment I expect of those affiliated with my political organizations and the Office of the Speaker."

In other words, Speaker Madigan was making it clear that loyalty goes well beyond merely showing up every day and working hard and meeting or exceeding goals. Loyalty, a trait prized most highly by Madigan, also means not doing anything that could get the boss into trouble or bring disrepute into the organization.

Quinn had worked for Speaker Madigan's organization in one form or another for about twenty years. But he was abruptly tossed overboard without a life jacket. Or so we thought.

Several months later, starting in the fall of 2018 and continuing into the spring of 2019, a group of loyal Madigan capos wrote checks to Kevin Quinn totaling $10,000, according to a Chicago Tribune report published last month.

Speaker Madigan may have expressed public contrition in 2018, but I know for a fact (because I've argued this point with them) that some members of his organization have privately never forgiven Hampton for coming forward. She, in some minds, is the disloyal one for airing Madigan's dirty laundry in public.

And, by extension, Kevin Quinn is the victim who needed their help. He had been publicly kicked out of the kingdom. He had no job and no prospects and was going through a very bitter divorce. So, they stepped up with a little pin money for "their guy." Maybe it was to help him pay child support, but his soon-to-be-ex-wife claims he has shorted her on that end.

This behavior is not an isolated incident. It is a recurring feature within the political environment that kept Speaker Madigan in hot water throughout 2018. Among other instances, some top Madigan dogs helped Madigan's former chief of staff Tim Mapes find consulting work after he was dumped over a sexual harassment complaint.

I know most of the guys who wrote the checks to Quinn and like or at least respect some of them. I'm pretty sure that most of them believed they were trying to "help" one of their own. The same goes for the Mapes stuff.

But Speaker Madigan was absolutely right last year when he accused Quinn of not exercising proper political judgment. And he could've easily said the same thing about Mapes. I mean, the big boss is being besieged on all sides over sexual harassment issues, and while this is all going on, his top Springfield lieutenant allegedly says — on the House floor to a low-level House employee — "Are you going to sex training today?"

That's disloyalty. Plain and simple. There's just no other way to describe it.

And, in my mind, "helping" disloyal people is also a form of disloyalty.

Not to mention that this was done in a way that was almost sure to be discovered.

Forget about the federal investigation for a moment. I'm not sure why the feds are looking at the checks written to Kevin Quinn, as the Tribune report claimed. Maybe we'll all find out one day, or maybe not. I doubt anyone could've predicted this happening.

But Quinn's soon-to-be-ex has, by all accounts, a fearsome divorce lawyer. I would bet money that that lawyer went after Quinn's bank accounts to determine how much he could afford to spend on child support. And voilà, a handy-dandy paper trail emerged of $1,000 checks.

Then again, maybe they didn't care about being discovered, which would be even worse. As I said, I really like and respect some of those guys, but they don't call 'em “Madigoons” for nothing.

Or, worst of all, Speaker Madigan knew about the “help” and either didn't say anything or otherwise encouraged it. And if he did, then all his talk about loyalty was just that. Talk.

Time and time and time again, Speaker Madigan has sworn that he has seen the light and has promised to change the culture of his vast organization.