Goodbye to Chief of Staff Tim Mapes’ Pantomimes of Power 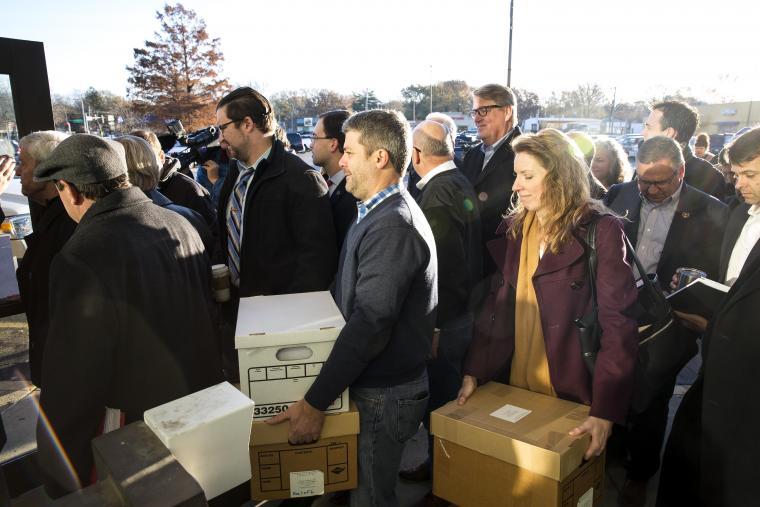 Another relic of Tim Mapes' days as House Speaker Michael Madigan's chief of staff has passed into history.

Mapes could be a kind and generous man to his friends and family. He was often the delightful life of the party when he chose to go out.

But the dude also had a wide and nasty mean streak and was a control freak beyond anything I've ever seen at the Statehouse. Outside of the aforementioned friends and family, only a few eyes watered up when he was ousted from his chief of staff job and executive directorship of the Democratic Party of Illinois after being accused of sexual harassment last year.

Every two years, Mapes would head over to the Illinois State Board of Elections' office on the Friday before the candidate petition filing period officially opened on Monday and stake out the House Democrats' first place in line.

The House Democrats have built a huge and efficient petition-gathering process. After tens of thousands of signatures are gathered, a specialized team goes over them with a fine-tooth comb to make sure the signatures are valid. And then the forms are checked by lawyers to make sure the required information is properly filled out.

Two years ago, Mapes had copies made of every petition submitted by every candidate, regardless of party. The organization entered all the names of every petition circulator into a database so that the union behind Sam McCann's third-party gubernatorial bid could avoid breaking the law by unknowingly using a circulator who'd also gathered signatures for a Democratic or Republican candidate.

They take this petition stuff super-seriously, in other words.

Anyway, Mapes would stick around for a half an hour or so on those Friday afternoons and then "volunteers" from his House staff would take turns camping out in front of the board's office throughout the weekend without pay. Mapes would return on Monday morning before the election board's office opened and triumphantly stand at the front of the line with all the House Democratic candidate petitions in tow.

The ritual was seen as a rite of passage for young staffers and it was supposed to promote unity and project an image of power and toughness to the Republican Party and everyone else.

"We're so determined to win we'll even camp out for days in the freezing cold just to secure the first place in line," was the thinking.

Mapes also clearly used the exercise to find out who would endure whatever he commanded and, more importantly, who wouldn't.

But it was downright cruel and unnecessary. I always felt so sorry for those folks. It gets cold in November and expecting young people to risk their health to satisfy the demands of an older man's ego was a bit much.

Plus, it didn't actually accomplish anything. All anyone has to do to qualify for the first ballot position is make sure they join the line with their petitions at the board's office before 8 o'clock on the first Monday morning of candidate filing.

Madigan's new issues staff director Craig Willert decided to abandon the practice this year. There was no "volunteer" campout the weekend before the first day of filing on November 25.

The old-timers may mutter about how these kids today just don't have the gumption that they did back in their day, but old-timers are gonna old-timer. Not every tradition is a good one.

This change tracks with some others made to Madigan's operation in the past few months or so.

State staffers are now required to submit applications to work on campaigns, for instance. In the past, it was just assumed that staff would work campaigns, paid or unpaid, whenever their participation was deemed necessary.

And, to be clear, lots of people prefer working campaigns to Statehouse government work. The Issues Staff is basically the campaign staffers who have state jobs during session months. Many or even most of those staffers signed up for the campaign experience more than the policy work.

But not everyone is so gung-ho. Secretaries and others are often roped in to work at phone banks. Some members of the legal staff do legal work for campaigns.

From now on, though, only those who have submitted applications will be asked to work on campaigns. And all staffers were told that their state jobs did not rely on their decision to submit or not submit campaign applications.

"This is how it ends," declared one morose House Democratic old-timer the other day when speaking of the new application requirement. Maybe, but it's also how new things begin.