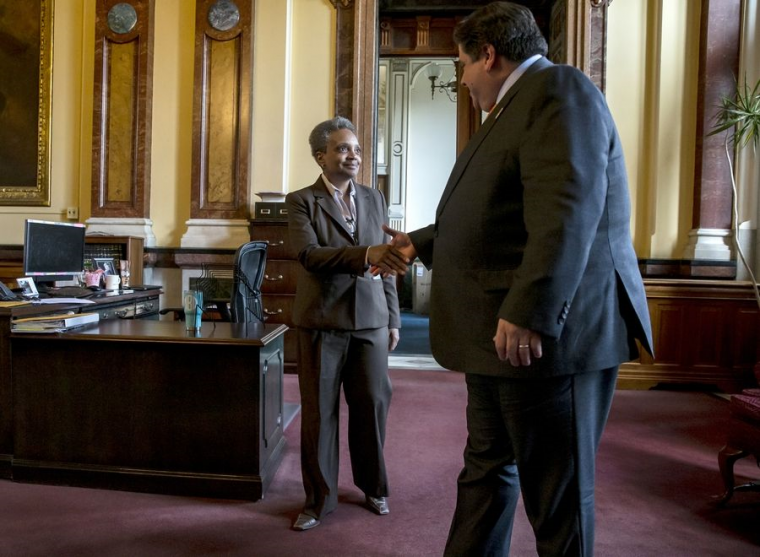 The statement issued by Governor JB Pritzker's office last Thursday night had some good advice for Chicago Mayor Lori Lightfoot, who gave what was billed as a "State of the City" address earlier that evening. Mayor Lightfoot had outlined the challenges facing the city, including an $838-million budget deficit and her need for Illinois government's help in changing some state laws to allow her to raise more tax revenues.

The Pritzker administration's statement read in part: "In the weeks ahead, as Chicago pursues assistance from the legislature, it will be important for the mayor to reach out to leaders and lawmakers across the state and across the aisle to build a coalition for her ideas."

The rookie mayor has had a habit of surprising Springfield with proposals offered up by unidentified sources to members of the news media, rather than working through established channels. That tendency has grated on some Statehouse nerves, partly because the mayor too often makes proposals that are dead on arrival and that put her natural allies on the defensive.

Some of this is probably due to her being so new. Some of it is likely because she ran for mayor as an outsider. She strongly endorsed Chris Kennedy for governor, ignoring her party's preference for Pritzker. She then challenged a sitting mayor (Rahm Emanuel), and then, when he dropped out, she stayed in the race and overwhelmingly defeated the Democrats' powerful Cook County Party Chair (Toni Preckwinkle). She believes voters gave her a mandate in April, and reporters and pundits of all stripes have mainly backed up her assertion.

Not often mentioned is that, while Mayor Lightfoot took 74 percent in the April runoff, Governor Pritzker won the city with 81 percent last November. Also, 723 thousand Chicagoans voted for the governor compared to the 396 thousand who voted for the mayor. Governor Pritzker's Chicago percentage and vote totals were both significantly higher than any Democratic gubernatorial nominee going back to 2002, when the party reinvigorated itself statewide after decades in the wilderness.

But, whatever. Everybody just needs to read the room and get along. The mayor should use the winning formula from the spring legislative session. Get the Democratic leaders on board, convince the unions to support it, and then work rank-and-file members to keep the leaders honest while trying to pick up whatever Republican support she can find. She has a strong personal relationship with the House Republican Leader, and that can surely be helpful. She has to focus on three numbers: 60, 30, and 1 (majorities in the House and Senate and the governor's signature). Otherwise, it's all just rhetoric.

"Our fates are intertwined," Mayor Lightfoot said Thursday about the common struggles that towns and cities are facing throughout Illinois. "That is why I intend to continue working with Governor Pritzker, the legislative leaders, and other state lawmakers, regardless of party or geography."

It's a good plan. It's a plan that could've been devised by Michael Bauer, who chaired Mayor Lightfoot's campaign and was her strongest link to the established political world. Michael passed away last night. "Sparkly, effervescent" is how his friend, Representative Sara Feigenholtz (D-Chicago), accurately described him in her grief. As for me, I always sought him out when he came to Springfield and I always left our conversations with a smile on my face. He was a gem of a human being, and according to his friend, Dave Lundy, he died while watching the mayor's speech.

Michael truly wanted his friend to succeed. Heck, we all do. Even all the ultra-conservative Eastern Bloc members lined up to pose for photographs with the mayor when she came to town — and they want to kick the city out of Illinois. The rest of the governor's statement included phrases like "Illinois succeeds when its cities succeed," and he pledged to work with everyone involved to make that happen.

Build on that good will, Mayor. It won't last forever.

And whatever you do, stop not-so-subtly threatening to tank the governor's progressive income tax if you don't get your way, as you did on Friday when you spoke with the Sun-Times and said something your office had to retract ("We can't keep taxing the hell out of all of our people who make substantial income. That's not right. That's not fair. It's not gonna work.").

Governor Pritzker can spend whatever it takes to push his constitutional amendment past the finish line. He's not the hostage, Mayor. You are.