Governor Pritzker Doesn’t Want to Die in a Steven Soderbergh Film, Either 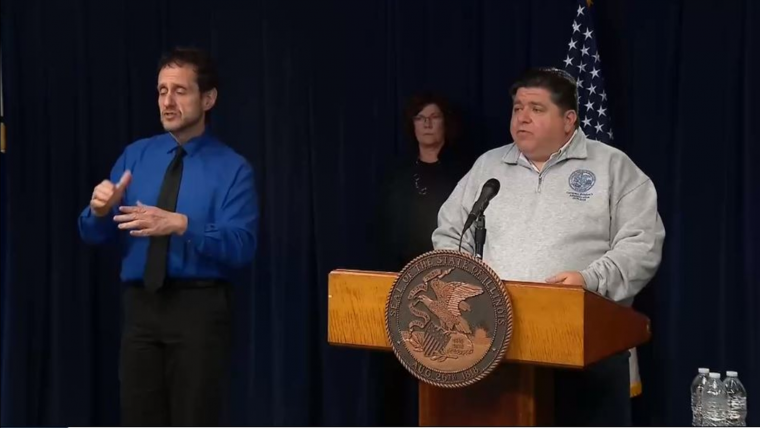 That was Ohio Department of Health Director Doctor Amy Acton speaking on March 12, when Ohio had only five confirmed COVID-19 cases. One percent of Ohio's population would be about 117,000 cases. "Community spread" means that the virus was transmitted by someone from inside the community, not someone who brought it in from outside.

"Whenever you know of two people that have it due to community spread, then you can assume that one percent of your population has it," explained Acton's press secretary, who cited a 2017 Morbidity and Mortality Weekly Report from the CDC, according to the Cleveland ABC TV affiliate.

"If the trajectory of cases we've seen in Illinois this past week continues," Abudayyeh said, "a week from now we could see approximately 3,400 more total case than we have now." That was on March 19.

"If the assumption is made that 20 percent of these cases are severe," Abudayyeh continued, "approximately 650 new cases could need hospitalizations. Again, this assumes the trajectory will continue as it has this past week."

Governor Pritzker said last week that his administration had been looking to other states and countries to see what Illinois should emulate and what Illinois should avoid doing. He singled out Italy, saying he's trying to make sure "we don't end up in the situation that Italy is in." Italy's total number of deaths (3,405) surpassed China's yesterday. China's population is just under 1.4 billion. Italy's is a little over 60 million. So, yeah, don't do what Italy did.

Italy's median age is ten years higher than the Illinois median of 37.4, and that is very likely driving up that country's death rate since it hits the oldest the hardest. China's median age is about a year older than Illinois'.

But it's impossible to compare confirmed Illinois cases and Italy's because, as of March 20, Illinois had tested just 4,286 people, compared to Italy's 206,886. Italy's first confirmed case was on January 31, seven days after Illinois' first confirmation.

The governor can't do a whole lot about the testing situation because the federal government has so thoroughly botched its handling of this pandemic. But the state is making some progress. Governor Pritzker told reporters last Thursday that, as of Wednesday, Illinois was able to conduct more than a thousand tests. "And in just a few days," he said, the state "will be increasing that to more than 2,000 tests per day." But even at that rate, it would take 18 more days to catch up to where Italy was at that time, adjusting for population size. (Italy has five times as many people as Illinois.)

The Governor is cautiously aggressive. He wasn't the very first governor to close bars and restaurants and cancel parades, but he was among the first, for instance.

You can almost see Governor Pritzker's thinking play out if you pay attention to what he says. He telegraphs his actions, which, frankly, is a good thing. He broadly hints that he will do something, which gets everyday people debating the topic among themselves. He does not suddenly announce anything out of the blue. Slamming people with surprises before most are ready could erode confidence. Just look at the mess in DC.

When it comes right down to it, we have to assume that Ohio is right and this is basically everywhere. We should start behaving like we are already carriers. We shouldn't have had to wait for a government order to stay at home if we could.

And, so I believe the governor was right to order most Illinoisans to stay home as much as possible for at least 16 days, the third governor to do so.

The only way to defeat this virus is to take away its food; and we're the food.