Senate President Don Harmon: The Madigan Reaching Out for the Madigan 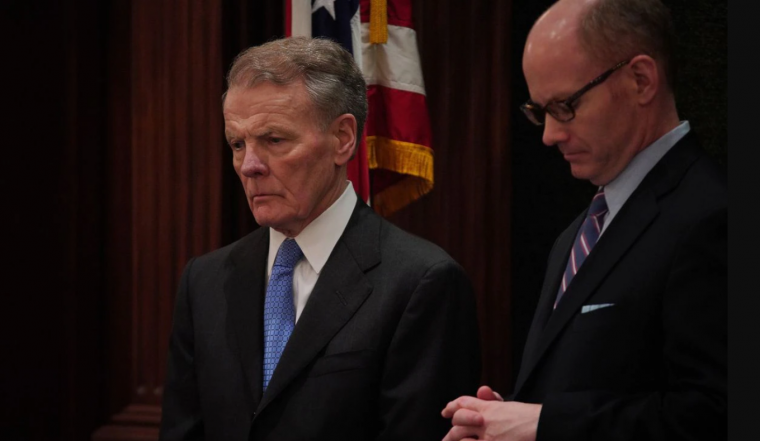 I interviewed both House Speaker Chris Welch and Governor JB Pritzker last week, so I thought I’d tell you about one of the overlaps.

Speaker Welch followed a man who had been in office for decades, so comparisons are unavoidable. When former House Speaker Michael Madigan was around, we were always playing endless guessing games.

I almost never got that sense with Welch this year. He was usually pretty upfront. He’d say he was going to do something, and then, for the most part, he’d do it. There were no major guessing-games. I wondered if that was a conscious decision and whether it would continue in the future.

“You know, Rich, I like to say I've been successful in politics for 20-plus years now because what you see is what you get. I try to be straight-up with people. They may not like the answer that I give them, but they like the fact that I give them the truth. And I think that's been a successful recipe for me in politics, and I'm going to continue to be that way. I think it's important that you just be straight-up and straightforward with people no matter what the position is.”

It’s one thing for Welch to pat himself on the back, but I was curious about what Governor Pritzker thought. Pritzker dealt with Madigan during the 2018 campaign (when Madigan’s inner circle was battered by a series of sexual-harassment scandals), and during his highly-successful first spring session in 2019 (when Madigan was very helpful in getting loads of bills passed), then through the federal investigation of Madigan and his allies, which ultimately resulted in Madigan’s ouster as House Speaker this past January.

So I asked Pritzker about the biggest changes he’s experienced since the House elected a new speaker. He essentially confirmed what Welch said about himself.

“Look, these are two very different personalities,” Pritzker said. “I was friends with Chris Welch before he became speaker. He's outgoing. He has a manner of addressing people and working with people that's very different than Speaker Madigan.

“You know, everything's close to the chest with former Speaker Madigan. Chris is a reasonable, I think pretty transparent and honest guy.

“And then the last thing I'll say is that you understand who Chris Welch is on a policy level. You know his ideology, what he believes in. Obviously, he's got to make some tough decisions sometimes being speaker, but understanding that we share a commonality of direction on most issues just makes it easy to deal with him. Look, I'm not trying to denigrate the former Speaker. I'm just telling you that Chris Welch is somebody that I regularly have the opportunity to speak with. I can text with Chris Welch or I can call Chris Welch and he will answer the phone. I mean, it took, I don't know, two phone calls through whatever to get through to Speaker Madigan. [There’s] nothing wrong, he's from a different era.”

I mentioned to Pritzker that every day was a different guessing game with Madigan. And, so far, we haven’t had to play that game with Welch. Senate President Don Harmon, I said, has been a different story.

Harmon unexpectedly tanked an agreement on a massive energy omnibus-bill last week at literally the last minute, then appeared to play some parliamentary games with the new state budget. He’s gaining a reputation as someone who, like Madigan, keeps his cards close to his vest.

Harmon and Pritzker are not on the greatest of terms. In public, they refer to each other as friends, but Pritzker backed someone else for Senate President in 2019 and the tension has been evident ever since.

“I won't even, I don't know if I should even put you on the spot on that one,” I joked to Pritzker about my Harmon reference.

“I always enjoy hearing your views,” the governor said. And then his staff abruptly cut off the interview. Not totally because of the line of questioning, mind you, but also because we’d gone several minutes beyond our allotted time.

To be fair, the governor defended the Senate President earlier in the interview, saying, for instance, that Harmon was merely speaking up for members of his caucus when he temporarily tubed the Exelon deal and that Harmon has been a reliable environmentalist throughout his career. “I know that he wants to do the right thing on energy legislation,” Pritzker said about Harmon.