If Politics Is a Science, Then Pritzker and His Critics Are Learning by Pratfall 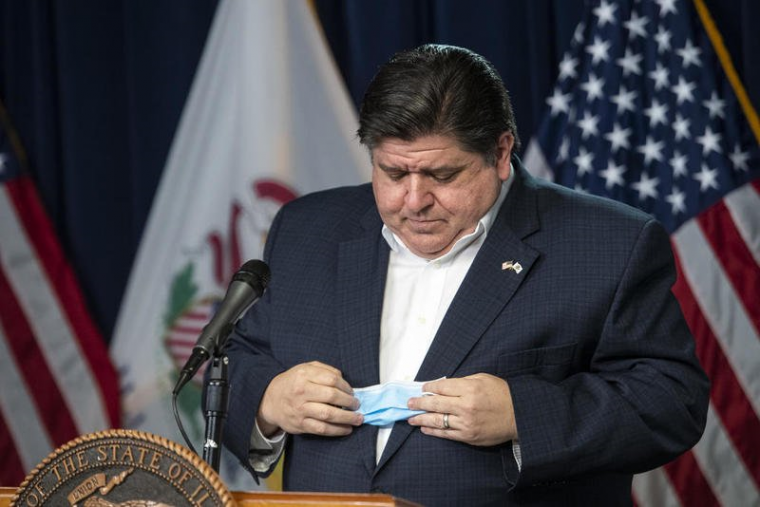 When Governor JB Pritzker announced the state COVID-19 "mitigation" plan for the Metro East on August 16, he said it was done in conjunction "with local officials in the Metro East region and across the border in St Louis."

Last week, though, the governor admitted the cross-border arrangement to try to contain the virus's spread was a "mistake."

Man, was it ever.

Instead of sticking to the state's original mitigation plan, which would've included things like reducing indoor restaurant capacity and shutting down all indoor bar service, Governor Pritzker only ordered bars and restaurants to close at 11 p.m., which was in line with what St Louis was planning at the time.

But the region's test positivity-rate has since continued to rise to, as I write this, just above 10 percent – by far the highest in Illinois.

Then, last week, Region 7, which includes Will and Kankakee counties, experienced 8-plus percent positivity-rates three days in a row, which triggered automatic state-mitigation.

According to a Belleville News-Democrat report, The Illinois Department of Public Health informed Metro East officials last Monday that their region's state restrictions would be tightened to match those that were about to be imposed on Will and Kankakee, including a ban on indoor dining and drinking.

But the same Metro East Democratic legislators who demanded prematurely that Pritzker speed up the business-reopening process way back on May 12, pitched a fit, and Pritzker backed down.

The protesting Democrats did have a point, I suppose. Pritzker originally said the restrictions he put in place would last two weeks. The local politicians wanted the governor to stick to his word. And the governor's own plan states that once a region meets the "resurgence criteria," then a "tiered menu of mitigation options will be considered." There are no actual hard-and fast-rules in his plan, and those Metro East Democrats undoubtedly knew the loopholes going in.

But that meant Pritzker would be imposing significantly tighter restrictions on Will and Kankakee counties, even though the two counties have substantially lower positivity-rates than the Metro East (8.4 percent vs. 10.4 percent as I write this).

And that set off Republican state Senators Sue Rezin and John Curran, who represent parts of Region 7. The two claimed the governor had "decided to place partisan politics above science." The same rules should apply to all regions, they said, "and they should be based on science, not politics."

It didn't help that Pritzker failed to reach out to the two Republican legislators before making his announcement. So, they, too, had a valid point.

On a crass political level, the Metro East was instrumental to Pritzker's 2018 Democratic primary win. It's also a vitally-important region for his "Fair Tax" proposal. Without the full and fervent cooperation of those powerful local political organizations, there's no dispute that his tax plan will be in serious trouble.

The plain fact of the matter, however, is that Pritzker cannot, on the one hand, say he values science over politics, and then, on the other, even appear to cave on political grounds.

There may have been sound reasons to try and equalize restrictions with St Louis because the city is mere minutes away from everyone in the Metro East, which is small in comparison to the Missouri metro region. It's not like the governor can close the bridges, after all. And, yes, Pritzker said he'd give the region two weeks. But he openly admitted last week that his actions clearly didn't work. Sometimes, you just gotta bite the bullet.

That region is on the verge of getting totally out of control, if it isn't already. Illinois can't do anything about Missouri. Deal with Illinois.

Thankfully, Pritzker seemed chastened by the whole experience last week when pressed by a reporter. "I will readily admit that that was not a good idea," he said. He should never, ever do this again.

And it's long past time for those Metro East Democratic legislators who've been up in arms since May about the governor's executive orders to loudly demand that their constituents finally take this pandemic seriously. There's no excuse for this nonsense. The region is fast becoming a national hot-spot, for crying out loud.

Several of those same legislators pushed hard to establish a large local contact-tracing pilot program in St Clair County. But experts have said contact tracing can be overwhelmed when the positivity rate is above 5 percent. It's not a panacea. Do better. There is no easy way out of this.