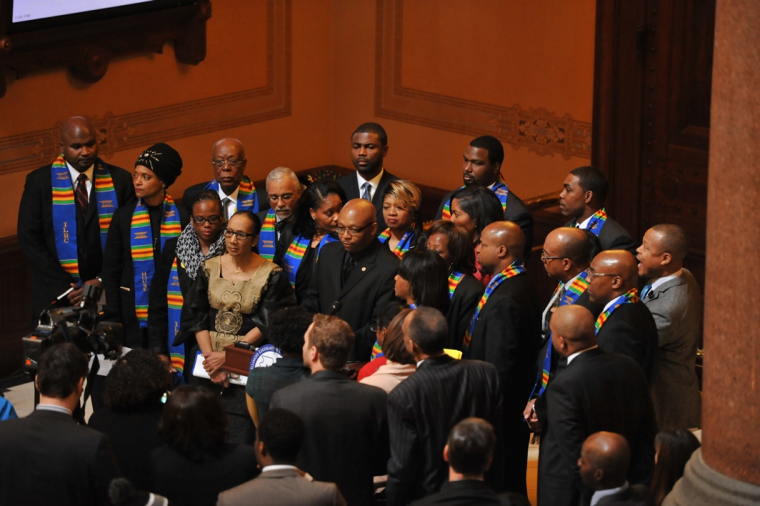 Since 2006, federal law has capped annual interest-rates on payday loans to active-duty military members at 36 percent. The interest-rate cap was broadened in 2015 to include several more types of personal, unsecured loans.

In Illinois, meanwhile, payday loan-borrowers have been subjected to average annual interest-rates of close to 300 percent.

Illinois lawmakers tried to tackle this issue in 2005, and passed a rate cap that was widely heralded. But the industry took advantage of a gaping loophole and then kept right on with their business.

That legislation was painstakingly negotiated over many months. Under the old regime of House Speaker Michael Madigan, most every interest was given a seat at the table and then they were told to hammer out their best deals. Madigan often said he was a big fan of President Franklin Delano Roosevelt’s use of that same method to pass much of his own legislation.

I don’t know about FDR, but MJM also had mouths to feed. The political machine he built (which was copied by the other legislative leaders) provided a path for his most-favored former state staffers into contract-lobbying jobs, where they continued running his campaign apparatus as well as representing a huge number of interests under the Statehouse dome. Hiring one of Madigan’s former staffers didn’t necessarily guarantee any specific industry a win, mainly because those folks represented all sides of almost every coin. But it did mean they were listened to. And oftentimes bills couldn’t move until their concerns were addressed, sometimes leading to very complicated laws that appeared on the surface to be wins for liberal Democrats, but, as with the payday-loan bill, turned out to be paper tigers.

As always, there were notable exceptions during the years, but this overall approach began to change after the 2018 gubernatorial election. A new liberal Democratic governor and empowered progressive legislators and interests were no longer content to settle for incremental surface-wins and pushed for big things like a $15 minimum wage. Madigan for decades would only agree to small minimum-wage increases, but he quickly realized he couldn’t stand in the way of that freight train.

Then, as the Legislative Black Caucus truly united for the first time during the tumult of 2020 and began working on a massive package of reform legislation, Madigan found himself under fire from all corners. Federal prosecutors were clearly coming after him, and a steadily-increasing number of his own caucus members were growing weary of his leadership and wanted him gone. He needed some allies and he needed them fast.

Those two phenomena, combined with a new and untested (because of the pandemic’s cancelation of 2020’s legislative session) Senate President, a national mood-shift, and numerous other factors, produced an environment that the Black Caucus fully took advantage of to pass a remarkable number of wide-ranging bills on criminal justice, education, and the economy during the brief January lame-duck session.

The days of Madigan’s “everyone at the table” incrementalism were ended by straight-up progressive bills that were far from watered-down. Madigan’s long and storied career also ended in January. His gambit didn’t work.

Last week, Governor Pritzker signed into law the Black Caucus’ huge package of bills dealing with economic reform. Among them was SB1792, a bill that basically applied the military’s simple but seemingly-effective interest-rate cap on payday and other personal loans. The payday-loan folks expressed outraged at how they’d been cut out of the process and predicted their industry’s imminent demise.

We’ll see if the industry’s dire predictions turn out to be true, but it’s as plain as day that massive change is happening, not just in the types of bills that have passed, but in how they’ve passed.

The question now is whether January’s session was a super-intense brushfire that will burn itself out and/or be extinguished by more moderate Democrats, or whether the path the General Assembly is on will be sustained.

The Black Caucus’ criminal justice-reform bill originally contained that qualified-immunity provision, as well as limits on collective-bargaining rights for police unions. But their bill was only able to gain enough votes when they agreed to strip out those items at the request of some moderate Democrats.

Representative Tarver’s bill could put more heat on those same moderates and create tension within the party. So, this bill could be one to watch.