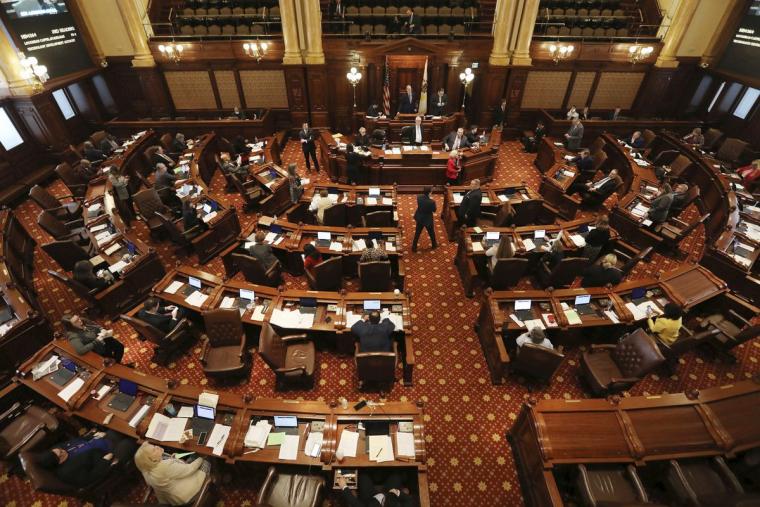 The Illinois Senate adjourned its session April 9 just after 3 o’clock in the morning. The House adjourned about three hours later, as the sun was coming up.

This wasn’t the first time that the chambers worked into the wee smalls to finish their work, including a budget, and it probably won’t be the last, but it’s getting to be a bit much.

Senate President Don Harmon told me afterward that, in the future, he would like to “avoid” adjourning sessions that late.

Harmon claimed that, because of the “remarkably collaborative and cordial working relationship” among Democrats in the Statehouse, the willingness to accommodate each other and to try to make “late adjustments to deal with ideas that came from this part of one caucus or that part of another caucus,” all led to a very long night.

“In the old days,” Harmon said, “a prior Speaker might have said ‘Noon on Thursday and we're done.’ This time, we were trying to work and adjust and adapt and add and subtract things at the request of the caucuses. And it did lead to a schedule challenge at the end.”

I can understand that explanation, but it was still severe for a whole lot of folks. Start earlier.

Okay, let’s talk about that state budget. I’m going to throw some numbers at you, but I’ll try to make this as simple as I possibly can.

If you want an idea of how crazy this fiscal year has been, just check the projected revenues when the Fiscal Year 2022 budget was enacted last year and compare them to where they are now.

Last spring, budget-makers settled on a $44.4 billion total revenue projection for FY22. As of last week, that number had risen to a whopping $49.2 billion — an increase of more than $4.8 billion, or almost eleven percent.

The unanticipated new money didn’t come directly from the federal government. But it was no doubt a result of the federal economic stimulus programs.

The only debt-paydown appropriation in the original FY22 plan last year was $928 million to repay interfund borrowing, and no tax breaks were included.

But, now, because of that new revenue, additional debt pay-offs, a larger rainy-day fund, and mostly one-time tax-breaks, will total $5.3 billion this fiscal year, a $4.4 billion increase above the originally-enacted spending plan (not including the pay-off of federal COVID-related loans).

The end of year surplus had been projected to be $1 billion, but that money was rolled into the overall spending plan by the new supplemental FY22 appropriation, and the state will now end this fiscal year in June with just $68 million cash, but with $1 billion in its heretofore empty rainy-day fund instead of the $600 million initially proposed.

The new fiscal year, which begins July 1, will see its projected revenues drop by $2.6 billion, or about 5.4 percent from the latest estimate for this fiscal year. But that’s still a five percent ($2.175 billion) increase over the FY22 estimate the budget-makers relied on last year.

Debt pay-down and tax relief will fall from a high of $6.37 billion (including about $1 billion to pay off federal covid-related loans) this fiscal year to just $640 million next fiscal year, a difference of $5.73 billion.

Non-discretionary spending will fall by $51 million net, but most of those spending top-lines will see increases. That can happen because, as noted above, the state’s remaining $1 billion in COVID-related debt will be paid off by the end of this fiscal year. Pension payments and transfers-out will each rise by about $300 million, and group health-insurance payments will increase by about $400 million.

The end of the coming fiscal year may be tight on paper. General Fund revenues are projected to be just $2 million higher than total spending next year. Yes, the state will have $1 billion in its rainy-day fund just in case, and the state’s bill-payment cycle can easily be expanded well beyond its current two weeks. But a worse-than-expected economic downturn could still cause some fiscal pain, although not nearly as much as in the days when the state had no cushion at all (or even no budget).