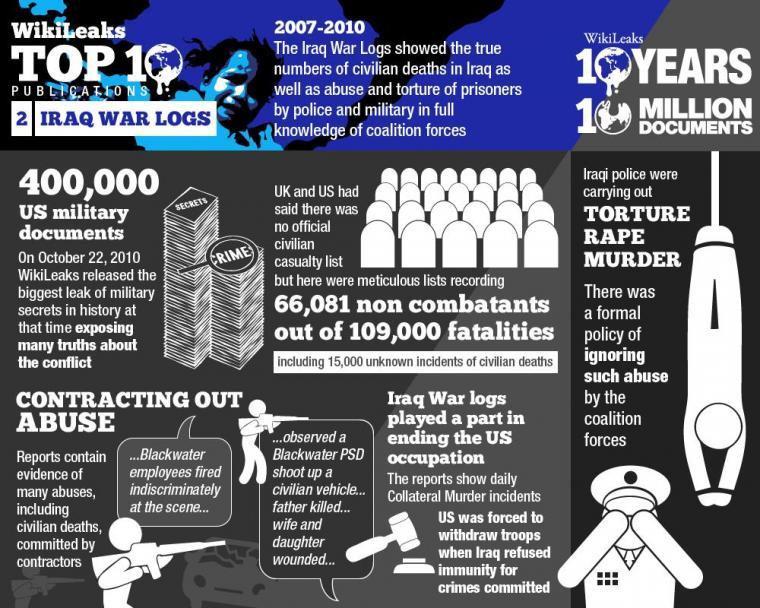 Great journalists like Seymour Hersh, who reported to us the tragedy of the Mai Lai Massacre and the horrors that took place at the Abu Ghraib prison in Iraq, are essential.

Ten years ago last week, Julian Assange’s Wikileaks organization published an exposé of U.S. government wrongdoing on par with the above Hersh bombshell stories. Publication of the "Iraq War Diaries" showed us all the brutality of the U.S. attack on Iraq. It told us the truth about the U.S. invasion and occupation of that country. This was no war of defense against a nation threatening us with weapons of mass destruction. This was no liberation of the country. We were not “bringing democracy” to Iraq.

No, the release of nearly 400,000 classified US Army field reports showed us in dirty detail that the U.S. attack was a war of aggression, based on lies, where hundreds of thousands of civilians were killed and injured.

We learned that U.S. military personnel routinely handed “detainees” over to Iraqi security forces where they would be tortured and often killed.

Ten years after Assange’s brave act of journalism changed the world and exposed one of the crimes of the century, he sits alone in solitary confinement in a U.K. prison. He sits literally fighting for his life, as if he is successfully extradited to the United States he faces 175 years in a “supermax” prison for committing “espionage” against a country of which he is not a citizen.

On the Iraq war we have punished the truth-tellers and rewarded the criminals. People who knowingly lied us into the war like Dick Cheney, George W. Bush, the Beltway neocon “experts,” and most of the media, faced neither punishment nor professional shaming for their acts. In fact, they got off scot free and many even prospered.

Julian Assange explained that he published the Iraq War Diaries because he “hoped to correct some of the attack on truth that occurred before the war, and that continued on since that war officially ended.” We used to praise brave journalists not afraid to take on the “bad guys.” Now we torture and imprison them.

President Trump has made a point of singling out the U.S. attack on Iraq as one of the “stupid wars” that he was committed to ending. But we wouldn’t know half of just how stupid – and evil – it was were it not for the brave actions of Julian Assange and whistleblower Chelsea Manning. Journalism should not be a crime and President Trump should pardon Assange immediately.

For more Julian Assange articles in the Reader, visit RCReader.com/tags/assange.