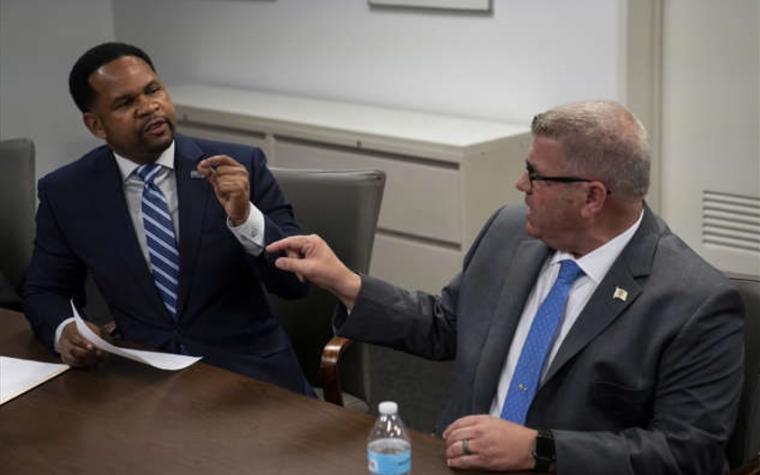 The Illinois Republican Party has successfully avoided being dragged into the hard-right camp at the state level for decades. Those days may be over.

With relatively-liberal Republicans Jim Thompson, Jim Edgar, and then George Ryan as governor, the state never embraced the sweeping policy changes which emerged from the “Reagan Revolution” and defined the national party for decades. The Illinois AFL-CIO endorsed Thompson’s last re-election bid. The National Abortion Rights Action League endorsed Edgar’s first gubernatorial run. Ryan campaigned to the left of his 1998 Democratic opponent on guns, abortion, and gay rights. They were all from the “governing wing” of the party, eschewing the rabble on the far right and occasionally batting them off like flies.

While Bruce Rauner defined himself by his rabidly anti-union stances, he was pro-choice enough to sign a bill that provided Medicaid funding for abortions. He never supported Donald Trump, even though the two shared several personality traits.

That distance from the far right helped statewide Republicans win general elections in moderate-to-liberal Illinois, particularly after the state leaned harder Democratic when Bill Clinton was elected president in 1992.

But if a recent Sun-Times/WBEZ poll is even close to accurate, those days may finally be behind the party. And, consequently, their statewide fate will likely be sealed without a sea change in Illinois political behavior and demographics.

The new poll has Senator Darren Bailey trouncing the establishment’s choice Richard Irvin by fifteen points, 32-17. Senator Bailey not only leads among Downstate Republicans by 24 points, he’s also ahead in the suburbs. Another 27 percent were undecided, with Jesse Sullivan the only other candidate polling in the double digits (eleven).

This is the second poll in a row showing a Bailey lead. Hard-right activist and radio host Dan Proft released a poll at the beginning of last week showing Bailey with a seven-point margin.

What has happened to Irvin and his $53 million war-chest, most of it supplied by the state’s wealthiest resident Ken Griffin?

One huge factor is that Governor JB Pritzker, the Democratic Governors Association, and Darren Bailey, along with his big-money backer Dick Uihlein, have so far managed to turn this race into the same sort of “traditional” GOP primary like other, more conservative states have seen for years and years, but that Illinois has generally avoided. They have reshaped the playing field and it has become untenable for the more moderate Richard Irvin.

After months of Irvin pounding Darren Bailey for being some sort of closet Democrat, the Democrats, Bailey, and Dan Proft spent millions to prove without a shadow of a doubt that Bailey was a solid Trumpster. And by deriding Bailey for being “too conservative” for Illinois, the Democrats have also apparently managed to so far convince many rank-and-file Republicans that they aren’t actually trying to advance Bailey’s candidacy (even though the Democrats are clearly doing that very thing).

The Irvin campaign claims that the Democrats are on pace to spend $32 million against their guy, although their numbers show that the Dems have “only” spent $15+ million so far. Uihlein has contributed $17 million to Bailey and Proft’s “People Who Play by the Rules PAC,” more than he’s ever done here. Uihlein’s big spending, and the willingness of the Democrats to literally spend whatever it took, seems to have caught Irvin’s team by surprise.

Another factor could be that voters finally caught on to a big Irvin lie. Darren Bailey is one of the most far-right legislators in the state. Once voters saw through Irvin’s game, everything else he said could be disregarded. And Governor Pritzker has come on strong in recent days with two very hard-hitting ads trumpeting some opposition research on Irvin that clearly left deep marks.

Irvin spent $3.6 million on advertising during the last week of May. By the first week of June, that spending had dropped to less than $800,000. The Irvin campaign allowed all of its Downstate broadcast TV ads to expire last week. They’re now focusing solely on the Chicago media market.

The story from inside is that “regular” Downstate Republicans are already with Irvin, so they want to focus on city, suburban and exurban Republicans with more Illinois-style Republican messaging. But the party has clearly changed. They have only one narrow path out, and it’s pretty rocky and steep.

Irvin has taken to repeating a mantra that Pritzker is backing Bailey because he knows Bailey can’t win. But by doing so he’s essentially making the Democrats’ own case that Bailey is “too conservative” for Illinois. And this risks firing up the hardcore base even more.