It Isn't for Lack of U.S. Immigration Laws 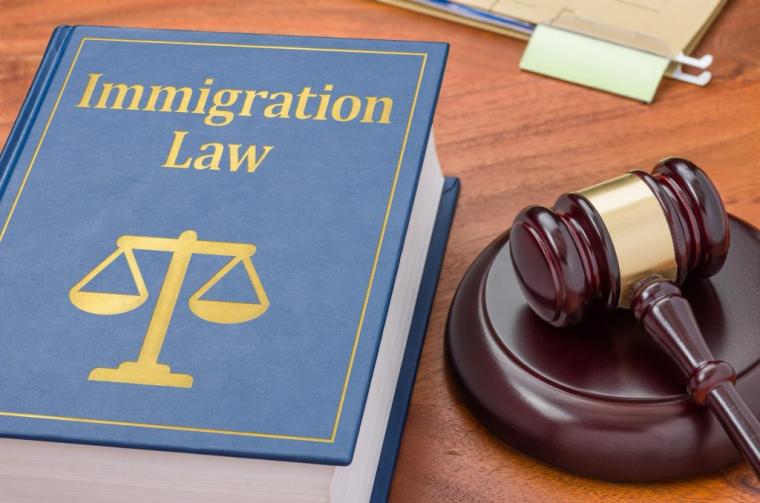 Immigration in the U.S. has become one of the most emotionally charged issues of our time, due to precious little factual data informing it, regardless of whether you are sympathetic to illegal immigration or opposed to it.

How many Americans have actually bothered to read any part of the dense amalgamation of U.S. laws that govern immigration. migration, and asylum? Or the laws regulating nationality and citizenship? Or the factual history of immigration in the U.S.? History is a valuable tool when considering any problem and its potential solution(s), especially where socioeconomic concerns exist.

America has a long history of immigration. We pride ourselves on it as foundational to our core American identity. The U.S. admits 1 million immigrants, migrants, refugees, and asylees every year, more than any other country on the planet – at least 50 percent more.

As such, there is a long history of legislation and associated rule-making, including hyper relevant data-gathering, providing a solid base for understanding the issue in pragmatic, fact-based terms.

Below is a summary of macro legislation and various intervening micro legislation that few Americans are aware of when fashioning opinions and/or political allegiance on this most serious issue, even though it is all public information and easily accessible.

While it is infinitely simpler to allow the media to craft our grasp of civic matters, despite its reckless disregard of relevant context in reporting, doing so is the height of civic laziness, and a heartbreaking testimony to the devolution of American engagement and stewardship of the rule of law.

All was quiet until the Immigration Act of 1917 which included the Barred Zone Act, barring immigration from Asian countries. This Act also established reading requirements for all immigrants seeking entrance to the U.S.

The Immigration Act of 1918 expanded the Anarchist Exclusion Act.

The Immigration Act of 1922 imposed a limit on the number of immigrants and simultaneously enacted a national-origin quota system.

Meanwhile the Cable Act of 1922 repealed parts of the Expatriation Act of 1907 that revoked a woman's U.S. citizenship if she married a foreign man.

The Immigration Act of 1924 imposed a cap of 150,000 immigrants, using a National Origin Formula that divided them into two categories, those from quota-nations and those from non-quota-nations.

The U.S. Border Control was also established in 1924.

Interestingly, the Equal Nationality Act of 1934 permitted foreign-born children of American mothers and alien fathers, who came to America as children (before 18 years of age) and lived in the U.S. for five years, to apply for U.S. citizenship. This also expedited naturalization for American wives' alien husbands.

Nearly 20 years passed until the Immigration and Nationality Act of 1952 passed, setting quotas for immigrants with needed skills, while giving greater deportation authority of suspected Communists and their sympathizers.

In 1953, an important Supreme Court case – Kwong Hai Chew v. Colding, 344 U.S. 590 – found that once an alien had lawfully entered the U.S., and resided here for a time, he/she accrued the same rights protected by the U.S. Constitution.

A decade later, in 1965, the Hart-Celler Act introduced Immigration and Nationality Act Amendments that (1) repealed the national-origin quotas; (2) implemented a visa system for family reunification and skills; (3) established immigration quota for the Western Hemisphere; and (4) established a 20,000 limit for immigrants from Eastern Hemisphere countries.

In 1982, Supreme Court case Plyler v. Doe, 457 U.S. 202 ruled that illegal immigrants were “within the jurisdiction” of the states where they reside, therefore under the equal protection laws as prescribed in the Fourteenth Amendment.

The Immigration Reform and Control Act (IRCA) of 1986 provided for sanctions against employers knowingly hiring illegal aliens, and also making it a crime to hire them; increased border enforcement; and gave amnesty to illegal aliens already in the U.S., more than 2.6 million received amnesty over a 10-year period. It also provided an immigration status verification system for access to welfare benefits.

The Immigration Act of 1990 raised ceilings for legal immigration, tripled the visas for skilled workers with U.S. job offers, and created a diversity admissions category.

The Illegal Immigration Reform and Immigrant Responsibility Act (IIRIRA) of 1996 established phone verification for authenticating potential employees by employers, further increased border enforcement with the creation of the U.S. Border Enforcement, created the Individual Tax Identification Number (ITIN) to replace Social Security numbers so that immigrants, regardless of legal or illegal status, can pay taxes. (RCReader.com/y/immigration1)

Deferred Action for Childhood Arrivals (DACA), also called the Dream Act of 2012, established guidelines for deferred removal action for a two-year period (subject to renewal) against individuals who came to the U.S. as children. (RCReader.com/y/immigration2)

However, DACA was not a legislative act by Congress. Rather, it was an Executive Action by President Barack Obama. Arguably, DACA falls outside the authority of the President because the Executive Branch cannot make laws; only Congress has that authority. The Executive Branch's authority is enforcing the laws that Congress makes, while the Judicial Branch determines if those laws, and their enforcement, are Constitutional – or not.

That said, border security and immigration, migration, and asylum, as an integral part of America's national security, is expressly delegated to the Executive Branch in the U.S. Constitution, Article XX. The Immigration Accountability Executive Action of 2014, also called Deferred Action for Parents of Americans and Lawful Permanent Residents (DAPA), targeted an estimated 5 million illegal aliens for deferred action and work permits, including extended DACA amnesty from two to three years.

In December 2015, 27 states filed suit against the Obama Administration over DAPA and extended DACA.

On February 16, 2016, Federal Judge Andrew Hanen issued a temporary stay, which stopped DAPA and the extension of DACA from being implemented.

DACA was repealed on October 5, 2017, by President Donald Trump, but delayed for six months for Congress to pass a permanent DACA law. However, Congress failed to do so.

On January 9, 2018, Federal Judge William Alsup ordered a nationwide injunction on Trump's repeal of DACA, including maintaining all the terms and conditions of DACA prior to the repeal. On January 13, the U.S. Customs and Immigration Services (USCIS) restarted the DACA program.

Due to the rise, sanctuary cities and counties are prohibited by federal legislation that was enacted in 1996 as part of IIRIRA, barring local ordinances that prohibit employees from providing information on illegal aliens to federal officials. The law says, "Notwithstanding any other provision of Federal, State or local law, a Federal, State, or local government entity or official may not prohibit or in any way restrict any government entity or official from sending to or receiving ... information regarding the citizenship or immigration status, lawful or unlawful, of any individual." – § 434 of the Personal Responsibility and Work Opportunity Reconciliation Act of 1996 (PRWORA), and § 642 of the Illegal Immigration Reform and Immigrant Responsibility Act of 1996 (IIRIRA).

Additionally, according to 8 U.S. Code, Section 1373, “A state or local government entity or official may not prohibit, or in any way restrict ... sending to, or receiving from, the Immigration and Naturalization Service information regarding the citizenship or immigration status, lawful or unlawful, of any individual.”

The contest between local jurisdictions and the feds arises from whether the federal government has the overriding authority to restrict and/or prohibit activities within a state's jurisdiction. The Tenth Amendment suggests it does not.

Throughout the years, amid this long exhaustive chain of immigration laws, are additional intervening laws, adding to an enormous compilation of rules and regulations governing, and funding immigration reform.

From 1995 through September 1997, Congress provided a temporary rolling amnesty for 578,000 illegal aliens in Section 245(i) as part of the 1995 Commerce, Justice, State Appropriations bill. This was extended twice by Clinton until November 7, 1997, and one more time by Congress until January 14, 1998.

The LIFE ACT Amnesty of 2000 reinstated the rolling amnesty in Section 245(i) for January through April of 2001, estimating 900,000 illegal aliens applied for status adjustment under the reinstatement.

Late Amnesty in 2000 provided amnesty to an additional 480,000 illegal aliens, whose applications were denied in the first nationwide amnesty secured in the Immigration Reform and Control Act of 1986.

The Refugee Act of 1980 provided emergency admission of refugees.

The Diversity Visa Program was initiated in 1990, issuing 55,000 visas annually in a random lottery process to natives of countries with low rates of immigration to the U.S.

Nicaraguan Adjustment and Central American Relief Act (NACARA) Amnesty of 1997 established an amnesty program specifically for eligible Nicaraguans, Cubans, Salvadorans, Guatemalans and Easter Europeans as part of the appropriations bill for the District of Columbia (HR 2607). Nicaraguans and Cubans living illegally in the U.S. since 1995 were automatically granted legal resident status if they applied by April 1, 2000.

Haitian Refugee Immigration Fairness Act Amnesty (HRIFA) of 1998 was passed in a 1999 omnibus bill after numerous other nations protested that it was discriminatory to refuse them the same treatment.

Neither the immigrants from NACARA or HRIFA are counted in the U.S. immigrant ceiling limits. It is estimated that 1.1 million illegal aliens received amnesty via NACARA and HRIFA over a decade.

The Secure Fence Act of 2006 requires 700 miles of double-layered reinforced fencing along the U.S.-Mexico Border. As of May 2015, DHS had installed 353 miles of Primary Pedestrian Fencing with 36 miles of Secondary Fencing running behind the Primary Fencing, including 14 miles of Tertiary Pedestrian Fencing running behind the Secondary Fencing; and 300 miles of vehicle fencing which prohibits vehicles from crossing though not a deterrent to pedestrian crossing. (RCReader.com/y/immigration3)

The 1996 IIRIRA also established Individual Tax Identification Numbers. In 2010, an estimated one half of all legal immigrants in the U.S. paid $13 billion in Social Security taxes using mostly ITINS, and received approximately $1 billion in benefits. With the ever-increasing burden on social security due to baby boomers hitting retirement age, contributions by illegal aliens to the Social Security Trust Fund have become an important gap filler, whether from ITIN numbers legitimately issued, or from stolen and/or forged social security numbers.

The Social Security Administration knows almost immediately when a social security number does not match up with the person using it to file. However, instead of alerting authorities to a possible crime, it files it in an escrow-type account called the Earnings Suspense File, where it resides until people can prove the wages paid were theirs, eventually allowing them to collect their retirement benefits. However, the billions paid annually into the trust funds by illegal immigrants is most often forfeited due to illegal status, providing a lucrative incentive for government to drag its feet on immigration reform. (RCReader.com/y/immigration4)

The disfunction that defines America's immigration is not for lack of laws, but for the lack of cohesive enforcement by bureaucracies that have grown too large and disjointed to manage properly. But that assumes that our government genuinely wants immigration reform. Considering the huge windfall of tax revenue flowing mostly one way, it is not surprising that it would turn a blind eye if it means that that revenue continues to flow unimpeded.