The January Madigan Vote Looms Over State Democrats Like a Raptor 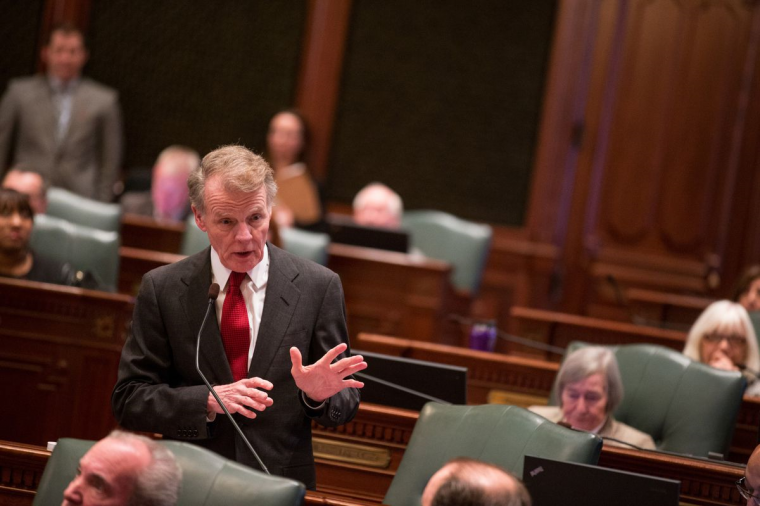 I reached out to several House Democrats who could be considered politically vulnerable in 2022 to ask them how they plan to vote on Speaker Michael Madigan’s re-election in January.

With one exception, I didn’t make much headway.

Much has been made about the number of Democratic women who have said they will not vote to re-elect the longtime House Speaker. That’s true, but it isn’t yet a universal opinion.

Democratic Representative-Elect Suzanne Ness (D-Crystal Lake) may have breezed past GOP Representative Allen Skillicorn by almost 2,300 votes last month, but as her district leans Republican, a remap may not help her all that much (particularly if it’s a “Fair Map” and therefore not drawn with partisan intent), and 2022 will be the first midterm election of a Democratic president. Representative Ness ran as a reformer and raised over a million dollars from Speaker Madigan’s network. Representative Skillicorn, for whatever weird reasons, barely campaigned, and spent almost nothing. She likely won’t get a pass in two years. That January Madigan vote, therefore, looms large.

“I do not have a statement at this time regarding the election for House Speaker,” Ness told me the other day. House Republican polling showed 76 percent of her district has an unfavorable view of Madigan, with 65 percent having a “very unfavorable” opinion and only 12 percent with a favorable opinion, according to the December 16 Ogden and Fry poll of 716 respondents.

Janet Yang-Rohr (D-Naperville) defeated GOP Representative Grant Wehrli by a couple of thousand votes. Her district leans slightly Democratic at the top, but the uncertainties of the coming remap mean that nothing is guaranteed. Yang-Rohr didn’t respond to multiple attempts to reach her about the speaker’s election.

Representative Katie Stuart (D-Edwardsville) has been the Democrats’ only real and consistent bright spot in the area of the Metro East, which has been trending Republican. Stuart defeated a Republican incumbent in 2016, but has fended off two attempts to unseat her since then. Still, 2022 could be problematic, particularly if mapmakers can’t deliberately pack her district with Democrats who are stuck in soon-to-be-former Representative Monica Bristow’s district. Representative Stuart also did not respond to an inquiry about her January intentions.

Representative-Elect Denise Wang Stoneback (D-Skokie) lives in a liberal Democratic stronghold, so she could face a primary opponent if she votes to re-elect Madigan. “Right now, I have no comment on this,” Stoneback wrote to me the other day.

Representative-Elect Maura Hirschauer (D-Batavia) also has a strong, albeit less liberal, Democratic district. “I do not have a comment at the moment,” she told me.

I got the distinct feeling that at least some of these folks (and plenty of others in that caucus) are hoping everything will work itself out by the second Wednesday in January, which would spare them from making such a momentous decision.

As mentioned above, I found one exception.

Representative Mark Walker (D-Arlington Heights) was recently asked by the Daily Herald how he was voting for House Speaker. “We’ll see,” was his initial response.

Representative Walker then reportedly praised Madigan for his organizational skills, but the Daily Herald also claimed he said that public servants must be held to a higher standard.

“I don’t believe he’ll be a viable candidate by January,” Walker then said of Madigan.

The article had no explanation for why Walker said that about Madigan’s viability. So, I called him. Walker said his comment was deliberately designed to send a message to the House Democratic caucus and the sub-caucuses within it, including the Black Caucus.

“Your guy’s not gonna win, come up with an alternative,” is what Walker said he meant.

To Walker’s mind, anyway, the 19 public Madigan opponents in the House Democratic caucus are not going to budge. “I think the caucus ought to decide,” Walker said, adding he doesn’t want to see this matter go to the House floor for endless votes. “I want us to succeed as a caucus because the state absolutely needs it,” he said.

Walker also believes that the days of voters not caring about Madigan are over. “I’m afraid that ship has sailed,” he said.

At least somebody said something.