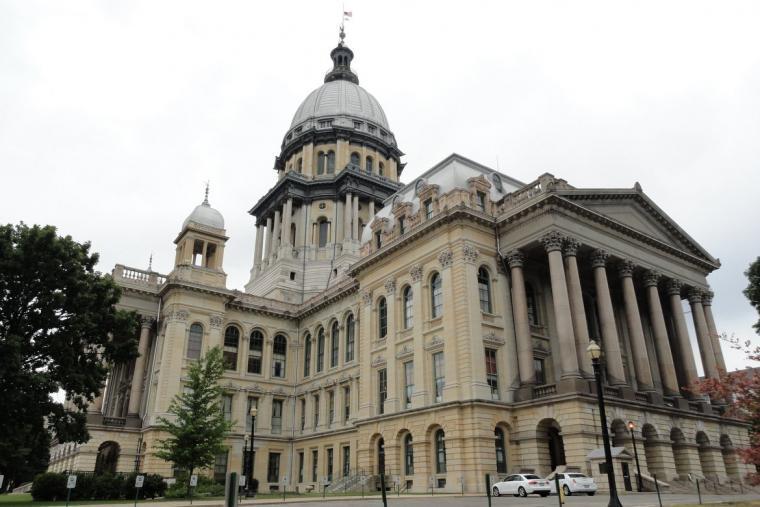 Governor JB Pritzker often referred to Lieutenant Governor Stratton as a "partner" during the campaign. And she was unarguably indispensable during Pritzker's statewide bid.

Stratton was only in her first term in the Illinois House when Pritzker picked her to run with him, but she'd already impressed her colleagues with her abilities. It was widely assumed that Stratton would play a major role in the Governor's dealings with the legislature.

But, depending how you count, Lieutenant Governor Stratton was only in Springfield for about 20 days during the five-month legislative session. Her public schedule, obtained through a Freedom of Information Act request, shows her departing for Springfield from Chicago a few times at 6PM with no events when she arrived, so I didn't count those.

Her schedule only includes a handful of meetings with legislators and scheduled appearances at legislative-related events.

And the last time Lieutenant Governor Stratton was in Springfield was May 16, and she departed for Chicago at 2 o'clock.

That meant Lieutenant Governor Stratton completely missed the final two weeks of the spring session, which is typically a busy time, but was especially so this year as one hugely important bill after another was hotly debated by the House and Senate.

As mentioned above, her absence was the source of frequent chatter in Springfield, particularly when some members of the House Black Caucus began resisting pressure to vote for the cannabis-legalization bill. Cook County State's Attorney Kimberly Foxx traveled to Springfield at least twice to help put out that fire, and several Senate Black Caucus members also played a crucial role, as did Deputy Governor Christian Mitchell, who, like Stratton, is a former House member.

The Governor's office was in an "all hands on deck" mode during those final days, but, according to her office, Lieutenant Governor Stratton wasn't even in Illinois. She traveled "out of state" from May 22 through May 25 for her daughter's graduation and then left on May 28 "with a US delegation of women leaders to Israel," her office said. Legislative session was scheduled to end on May 31, but ended up lasting until June 2.

Lieutenant Governor Stratton returned on June 5, just in time to attend Governor Pritzker's bill-signing ceremony for budget-related legislation, even though the budget deal was made and voted on while she was out of the country. She also attended the Governor's signing-ceremony for the Reproductive Health Act the following week, the day after she was interviewed on WTTW's "Chicago Tonight" program.

Lieutenant Governor Stratton's spokesperson defended his boss, saying she'd been "deeply involved" in legislation and had "countless conversations" with legislators. And the Governor's office claimed Pritzker consulted with her "regularly" on issues like expungement during the cannabis-legalization debate: "Illinois is a more just and equitable state today because of the Lieutenant Governor, and her work will continue to be central to the progress we make."

But I talked with several House Democrats, mainly Black Caucus and female members, and everyone said the same thing: They had little to no interaction with Lieutenant Governor Stratton on important legislation.

"Not at all," said one legislator, adding "She stopped by to say hi, but no conversations on bills."

"She seemed kind of on an island of her own if you asked me," said another.

It's not unusual for a Lieutenant Governor to not take a major role at the Statehouse. The office has no constitutional duties.

This simply wouldn't have been a story with almost all previous lieutenants-governor because expectations were so low. Expectations for Stratton, on the other hand, were sky high, and remain so, as clearly shown by that WTTW interview.

As far as I can tell she wasn't elbowed out by the Governor or his administration. She chose this path, which is obviously her right as a constitutional officer. And, in the end, almost all of the Governor's bills passed.

But the words I heard most often about her were "disappointing" and "missed opportunity."