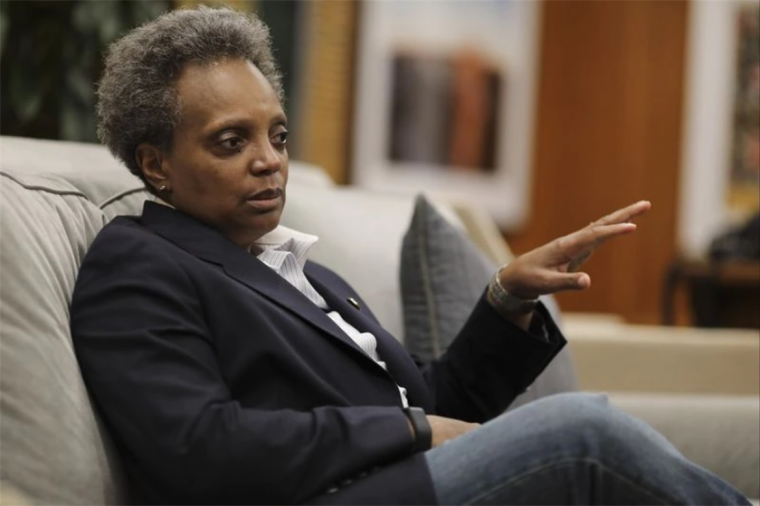 Matt Chapman, a self-described data nerd who runs a not-for-profit group called “Free Our Data,” recently filed Freedom of Information Act requests with Chicago Mayor Lori Lightfoot’s office. He wanted everything received by the Chicago Tribune this year via their FOIA requests.

Chapman’s trove included text messages sent back and forth between Mayor Lightfoot and state leaders, including Governor JB Pritzker.

Most of the conversations were innocuous or polite. The governor thanked the mayor for sending him a bottle of tequila, for example.

But some of the conversations are revealing. On July 14 of last year, Lightfoot informed the governor that the city was “toying with a mandatory mask order for Chicago.”

The governor responded: “Just want you to know we already have a statewide mandatory mask order. It is the law right now during the emergency.”

Governor Pritzker had, indeed, issued a mask order more than two months before Lightfoot was kicking the idea around.

I thought that was weird, but then last week Lightfoot introduced a city ordinance that was basically a copy-and-paste of a bill Pritzker had recently signed into law. Oops.

In August of 2020, during violence and looting, Pritzker sent Lightfoot a text message saying the two should talk about the situation. An hour later, Pritzker sent her another text saying, “I’m hearing reports of activity downtown and want to reiterate my offer of assistance of state police tonight.”

There was no reply. Billionaire Ken Griffin has heaped scorn on Pritzker for not intervening in the city’s violence, but that message shows he was at least trying to convince the mayor to accept state help on one occasion.

In late September, Pritzker told Lightfoot that the state police and the National Guard were “coordinating closely” with the Chicago Police Department through the weekend. “Hopefully we are all over prepared,” he wrote. “Thanks so much for your leadership,” she told the governor. “I hear from lots of folks that they like to see us working together. Gives them confidence.”

“Agree and also I like working on the same page with you. So there’s that.” Pritzker wrote.

In January of this year, before vaccinations became widespread, Chicago resident Pritzker sent the mayor a Block Club Chicago story about a massive indoor party in the Old Town neighborhood. “How brazen?” he wrote. “This looks ripe for a visit by CPD. !!!”

“On it,” Lightfoot replied.

But there were clearly moments of tension. “Just hearing from one of my city council chairmen that your team is trying to move something on [the sale of the] Thompson Center without presenting a plan to me and my team,” Lightfoot told Pritzker. “We should discuss because that will not happen.”

Instead of replying to Lightfoot’s text, Pritzker sent a link to an online opinion piece written by a political enemy that trashed both him and Illinois Department of Public Health Director Ngozi Ezike. The piece was believed at the time to have been generated by Lightfoot or her allies because it also heaped praise on Lightfoot’s public health director.

“Thank you” was all Pritzker wrote. There was no reply.

Organized labor worked last spring to kill a proposal by Pritzker and the Illinois Retail Merchants Association for a statewide mandated paid sick leave law. Lightfoot was also opposed, and she made that known in a text to the governor in late May. “I would like to talk about the paid sick leave bill. We strongly oppose. Let me know when you can talk.” There was no recorded reply.

Senate President Don Harmon often didn’t reply to the mayor’s texts, although that doesn’t mean he didn’t pick up the phone or talk to others.

Lightfoot sent several terse but one-way text messages to Harmon this year, including these in January of 2021: “Don, my folks are bringing me comments that are concerning. If there is no personal issue, you want to address, then let’s have the discussion. … Correction: if there is a personal issue that is of concern, let’s put it on the table.”

A few days later: “A courtesy call regarding the fire pension bill would have been helpful, particularly since there is no funding for it. When that pension fund collapses, I will be talking a lot about this vote.”

And then in May: “It is important that we talk early. The direction things are going is totally inconsistent with what you committed to.”