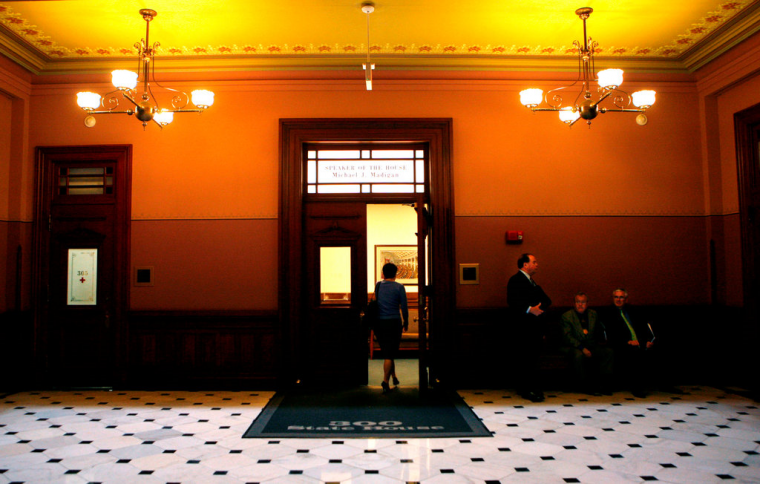 Bribery is a Class 2 felony in Illinois. It's also a federal offense, punishable by up to ten years in prison. Neither of those laws stopped former State Representative Luis Arroyo (D-Chicago) from allegedly attempting to bribe a state Senator, who turned out to be an FBI mole.

Representative Arroyo's alleged bribe was made on behalf of his lobbying client. As a registered lobbyist in the City of Chicago, Representative Arroyo was required to disclose the name of his client and how much he was making every quarter and which city agency or agencies he was lobbying. Those disclosures didn't stop him from allegedly making that bribe.

I'm also now hearing talk from the governor's office about forcing lobbyists to disclose their actual lobbying activity. As mentioned above, Chicago already requires this. If the Illinois proposal winds up mirroring the city's ordinance, lobbyists would have to report which agencies they lobbied (including the legislature) on specific bills. But they could be required to file much more detailed reports like Cook County does.

Lobbyists are always handy scapegoats during ethics crises. They're probably the only Illinois profession more unpopular than being in the state legislature. Deflection is the order of the day in times such as these.

Defensiveness by any targeted group is also to be expected when change is in the air. Right now, not-for-profit organizations that lobby Chicago agencies and the city council don't have to register with the city. That will change in January and some lobbyists with small groups are furious. But not-for-profits have had to register at the state level for a very long time and I don't think I've heard one complaint.

It's also no secret that the governor isn't a big fan of the lobbying culture in Springfield. He didn't rely on their money to get himself elected. His top staff members are proud of this independence to the point of disdain for elements of the lobbying corps. Using the sweeping federal probe as an excuse to crack down on lobsters is no real surprise in this context.

Some lobbyists I've spoken with point to what they call the hypocrisy of the governor's disclosure argument. Governor Pritzker signed a bill into law this summer which barred employers from asking potential employees about their salary history. "We are declaring that one's history should not dictate one's future," the governor said at the time. By that logic, wouldn't this new disclosure also harm women and people of color who lobby or are looking for clients? the lobbyists ask. I dunno. I mean, it's not like the state no longer publishes its employees' salaries online.

Another argument I've been hearing a lot is that lobbyists worry the shake-down artists in the General Assembly will use their newly-required income-disclosures to squeeze more campaign contributions from them. In response, just about every lobbyist I've talked to in recent days wants all Springfield fundraisers banned during session months.

Fundraisers are currently banned on session days. Session weeks typically run from Tuesday through Thursday. So, legislators get around the ban by routinely hosting fundraisers on Monday nights. House Speaker Michael Madigan holds the biggest such Monday-evening fundraiser of the year out at Lake Springfield. No less than eight fundraisers for 15 legislators plus the Senate Republicans' campaign committee were scheduled for the Monday before the start of the fall veto session's second week on Tuesday, November 12.

Lobbyists complain that they're often handing legislators campaign checks the night before crucial committee hearings or floor votes. Some legislators do take offense at no-shows to their fundraisers, but contributing to campaigns also makes people queasy even if there is absolutely no quid pro quo arrangement.

Years ago, when the session fundraiser ban was passed with the Monday night loophole, several large organizations announced they would boycott those fundraisers in protest. But visibly standing up to the culture can have consequences for individuals.

An honest debate should take place about the merits of Chicago's lobbying disclosure ordinance. Have any city lobbyists been harmed by disclosing their fees or their activities? If so, they should come forward and be heard.

Whatever the case, this is a beginning, not an end. Plenty of other ideas also need to be addressed.