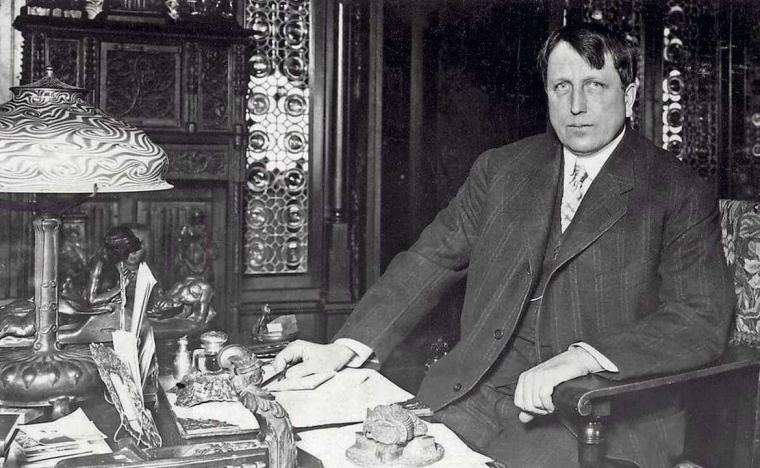 In 1895, a 32-year old entrepreneur in New York City bought a failing newspaper and hatched a bold plan to turn it around.

The newspaper industry was cutthroat, especially in New York. There were at least 16 other daily newspapers in circulation, and there was fierce competition for readers’ attention.

But the young entrepreneur had an idea: thrill readers with tales of death, destruction, and brutality in the Cuban War for Independence against Spain.

Cuba was a Spanish colony at the time, but revolutionary forces had been fighting for independence for several years. Few people in the U.S. really cared about Cuba. But the new publisher vowed to make them care.

His name was William Randolph Hearst. And his paper, the New York Morning Journal, constantly thrust Cuba in his readers’ faces.

Their stories were full-blown sensationalism. By early 1898, Hearst’s Journal was printing outright fabrications of atrocities committed by Spanish troops in Cuba, in an effort to whip up public support for the United States to join the war.

The government played along. While “war crimes” did not yet exist, U.S. President William McKinley escalated tensions by accusing Spain of atrocities, saying in a speech that “the civilized code of warfare has been disregarded.”

Then, on February 15, 1898, a U.S. naval vessel known as the Maine exploded and sank in Havana Harbor off the coast of Cuba. Two hundred and sixty-eight sailors died.

Several investigations were conducted, and to this day, there is still nothing conclusive explaining how the explosion took place. It’s entirely possible that the explosion was caused by the Maine’s on-board fuel.

But Hearst (along with many other papers) jumped to publish stories claiming the Maine was sunk by a Spanish torpedo, and they continued agitating for the U.S. to join the war.

Thanks to the effective media propaganda, most Americans were in favor of war. The newspapers had cast Spain as the evil aggressor, and its commanding general, Valeriano Weyler, was routinely called a “butcher.”

The newspapers told Americans that the fight against Spain was a necessary one ... that it was a matter of moral righteousness – a crusade of good against evil.

They finally got their wish in April 1898 when the Spanish-American War broke out.

There are a lot of similarities with the media today.

The level of trust in the media is already laughably low. There was the obvious Hunter Biden laptop coverup, which most mainstream media refused to even mention during the U.S. Presidential election in 2020.

Then there were the outright lies in the Russia-collusion hoax, for which the New York Times was even awarded the “esteemed” Pulitzer Prize.

(Coincidentally, the Pulitzer is named after Joseph Pulitzer, a newspaper publisher who also fabricated lies in the late 1800s and agitated for war against Spain.)

Then there’s the case of Biden appointee Tracy Stone-Manning, who was nominated last year to head up the federal government’s Bureau of Land Management.

Stone-Manning is a former eco-terrorist who participated in violent campaigns against forestry workers in her youth.

This isn’t some wild conspiracy theory; Stone-Manning has admitted to wrongdoing, including sending violent threats to the U.S. federal Forestry Service. She ultimately avoided prosecution and saved herself by ratting out her associates.

But a recent Freedom of Information Act request revealed that NBC News colluded with the Biden Administration to go easy on Tracy Stone-Manning during her confirmation hearing, and whitewash over her terrorist history. (RCReader.com/y/stone)

Think about the media circus a few years ago when U.S. Supreme Court nominee Brett Kavanaugh was accused of sexually assaulting someone when he was a teenager.

There was no promise from NBC News (and other mainstream propagandists) to go easy on the allegations against Justice Kavanaugh that went back 30-plus years.

Instead, they smeared his name and deemed him guilty.

It’s also noteworthy that, during Kavanaugh’s confirmation hearing, several protestors stormed the Capital and physically accosted United States Senators in order to prevent the Constitutional voting process from occurring.
Yet NBC News declined to label those protestors “domestic terrorists,” or to claim that democracy was ‘under attack’ because they had criminally trespassed into the Capitol.

This is the same media that acted as the government mouthpiece during COVID, justifying the public-health dictatorship that took over the world.

This is the same media that watched cities burn in 2020 and said the protests were “mostly peaceful.”

And, yes, this is the same media that has routinely pushed America into war. It wasn’t just Spain in 1898.

The United States joined the Vietnam War based on a Gulf of Tonkin skirmish with the North Vietnamese that never actually occurred. But the Johnson administration and intelligence sources said it happened, so the media reported it as fact.

Then there were those supposed Weapons of Mass Destruction in Iraq, which the media dutifully reported without question and helped push the U.S. into war back in 2003.

Today, many in the media are calling for an escalation against Russia. They want a no-fly zone. They cheer the President’s dementia-ridden foreign policy and praise him for impromptu comments that only escalate tensions.

Most of all, they force-feed the war in Ukraine, 24/7, as if that’s supposed to be our number-one priority.

Forget about the economy, rising prices, and supply-chain dysfunction ... and forget about conflict anywhere else in the world. We’re only allowed to care about Ukraine and Putin.

Historically speaking, it is not far-fetched to think the media could help push the world into a major war … and one with potential nuclear ramifications.

It’s not inevitable, but we are closer today than any other time since at least 1962 – and certainly closer than even a week ago.

That’s why it is more important than ever to be prepared for whatever the world has in store for us.

And that means crafting a rock-solid Plan B to make sure you can respond from a position of strength, whatever crisis comes next.

James Hickman (a.k.a. Simon Black) is an international investor, entrepreneur, and founder of Sovereign Man (SovereignMan.com). He writes about his life experiences and global travels to help readers secure more personal and economic freedoms in order to protect it all from bankrupt governments.