The Night People Say Thank You: November 25th Farewell Reunion Show at the RiverCenter Is in Honor of Iowa Rock and Roll Hall of Fame Induction with Proceeds Benefiting Adler Marquee Renovation 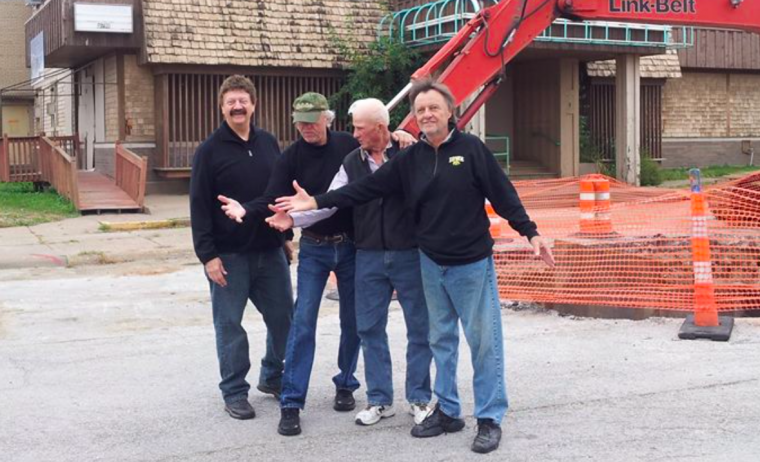 Talk to anyone over 40, and most will tell you they think and feel as if they are still in their thirties. This is borne out every time the Night People announce a reunion concert in the Quad Cities and droves of fans turn out for the event.

The nostalgia is palpable, and for good reason: the Night People represent an era when music gave us permission to release all manner of repressive decorum, to absorb, dance and intellectually explore thanks to the creative genius of rock and roll stars emerging – the Beatles, Byrds, Rolling Stones, Jimi Hendrix and Led Zeppelin – all of whom profoundly influenced musicians around the world, including our own Night People.

The Night People – Mike Stroehle (guitar, piano), Rob Dahms (lead guitar, vocals) Richard Collignon (drums), Kenny White (base), Gary Pearson (base, vocals) and Jimmy Stroehle (drums) – formed their rock band upon leaving high school in 1964. Due to a whole lot of talent, and dreamy good looks, the start-up immediately became the house band for the Draught House when it opened in 1965. This semi-permanent gig quickly established the riverfront venue as the Quad Cities' place for vibrant night life and live music.

The Draught House (formerly the American Legion and eventually becoming The Dock Restaurant) was adolescent Heaven on Earth. You knew you had arrived when you could get in legally. (Males had to be 21, but females only 18!) Within the year, the band was also playing on Sunday evenings to an all-age crowd at the Col Ballroom. Many teenagers got solid practice as hardcore fans for when they did come of age.

The Night People's music is quintessential classic guitar driven rock and roll at its core, later developing a rockabilly rhythm that guaranteed everyone kept moving on the dance floor. Their performance always inspired a serious party, lots of kids making hay, perhaps in tribute to their brothers, sisters and peers in Vietnam. Kids did things with extra gusto back then because the draft and war was ever looming for so many.

Spike O'Dell, DJ for KSTT, the QCs rock radio station in the 60's, believed in the Night People's talent so much that he provided the band with cassettes of the newest singles being released. They had only a few weeks to work out the songs to play them just prior to the songs' radio debut. This gave the Night People an uncommon advantage, ensuring they were always on the cutting edge of the best emerging music, constantly honing and improving their own skill sets. And all getting better looking by the year!

When Jimi Hendrix performed at the Col Ballroom in 1968, The Night People opened for them. Mike Stroehle recounted the experience, thinking their band was the bigger deal, until they heard Hendrix play. His music had an everlasting impact on the young musicians. Mike laughed saying, “I don't think we played another Beatle song for a whole year after that!” Mike said that he has been told by industry insiders that Hendrix's performance at the Col is considered one of the finest of his short career.

The Draught House closed seven years later and the original band members dispersed. But the band reformed 15 years ago thanks to the efforts of Jimmy and Mike Stroehle and Rob Dahms. In November of 1984 the Night People held their first Draught House Reunion Concert at the RiverCenter for over 3000 fans, ecstatic at the band's return. Their last reunion concert in 2016 was the 50 year celebration of the Draught House. Again fans showed up for another spectacular party with the Night People's signature music rocking the Col. It is a visceral fusion of intense music appreciation, floods of memories, and great affection for the band.

This September, The Night People were inducted into the Iowa Rock and Roll Hall of Fame. On Saturday, November 25, 2017, all original members of The Night People will reunite one last time to commemorate this honor and say "thank you" to their fans for their continuous support. It will be a memorable concert and party that won't be missed by those of us who include The Night People as part of our Rock 'n Roll DNA. Be there, or be too square!

(Editor's note: My initial connection to the Night People was through our family babysitter Kris Arnold and her boyfriend Phil Collignon, Richard's younger brother. Kris would often haul me along to see Phil and watch the Night People practice in the Collignon's basement. Phil passed away in March 2016. He was kind, passionate, intensely bright, and another genuine Quad City original, whose loss leaves a permanent void for anyone lucky enough to have known him even if just a little.)

For more information on, and tickets to, the Night People's November 25 concert at the RiverCenter, visit RiverCtr.com.