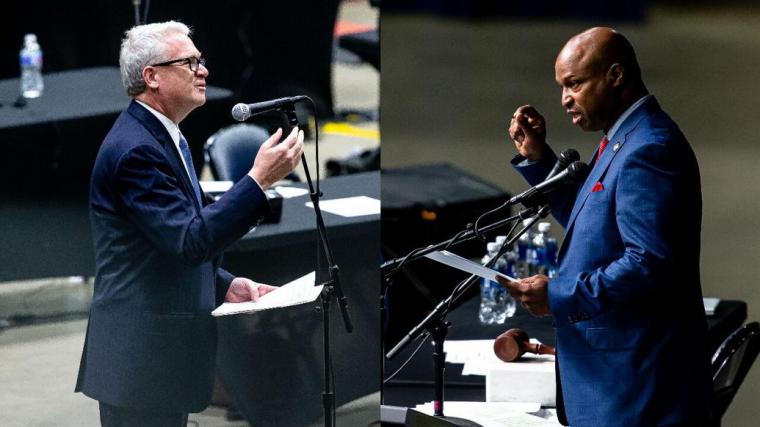 It started when I asked Speaker Welch if he thought gun-law reform would play a major role in the fall campaign, which is basically just around the corner.

“I think Democrats, particularly Democrats in Illinois, vastly differ from Republicans in Illinois on some major issue,” Welch said. “Guns is one of them. We have a guy that's running for governor right now, who's leading the Republican ticket [state Senator Darren Bailey], that is probably the most pro-Second Amendment legislator the state has ever had — certainly the most pro-Second Amendment candidate for governor we've ever had. And looking at who's won races on the Republican side, we have a lot of folks who want to keep dangerous weapons on the streets and make it more difficult to live in a lot of our communities. We have a candidate for governor who does not believe in a woman's right to choose. He believes that even in the case of rape, and said that a woman wouldn't have a right to an abortion. These are issues that are ripe to be discussed in the fall campaign.”

Senator Bailey bragged often during the Republican gubernatorial primary campaign that he was the most pro-gun state legislator and candidate for governor. He also said on the campaign trail that he was against all abortion except to save the life of the mother. He’s tried to walk that back since then by saying he’s not for bans, but the damage has been done and his public (and recorded) comments are fair game.

Told that he sounded eager to pair Republican candidates with the top of their ticket, Welch said, “The top of their ticket is very much a reflection of the bottom of their ticket. A lot of right-wing extremists are their candidates for office. And these are some very important issues that voters are going to have to choose between. We can continue to move Illinois forward. We can be a safe haven for women when it comes to reproductive health. We can be a state that leads when it comes to common-sense gun laws, or we can go back. I believe that people in the state don't want to go back. We're going to tell them in November, ‘We won't go back.’”

Later in the interview, which ranged over a variety of topics, I returned to the topic about campaigns. House Republican Leader Jim Durkin has often demanded that Welch take specific actions, and the two have frequently sparred. So, I asked Speaker Welch, did he believe Leader Durkin should speak out about Republican gubernatorial nominee Darren Bailey?

I asked Durkin’s office for a response. “Speaker Welch sounds unhinged,” said Durkin spokesperson Rachel Bold. “He would do the institution a favor by reflecting on his own behavior and telling us how he has grown in the last twenty years. His comments are rich coming from a guy who defended Public Official A's corruption for over a decade. Speaker Welch can't and won't comment about the real issue, Democratic corruption, all because he is indebted to the 13th Ward.”

In case you’ve been living under a rock, “Public Official A” is a reference to former House Speaker and current 13th Ward Democratic Committeeperson Michael Madigan, who was given that moniker by federal prosecutors in the indictment of four of his cohorts.

Durkin has reportedly been firming up his support within his own caucus since several unfavorable primary results caused at least one member to start calling around about a possible challenge. But if Durkin manages to knock the House Democrats off their super majority pedestal this November, the two leaders will have to somehow find a way to work together.