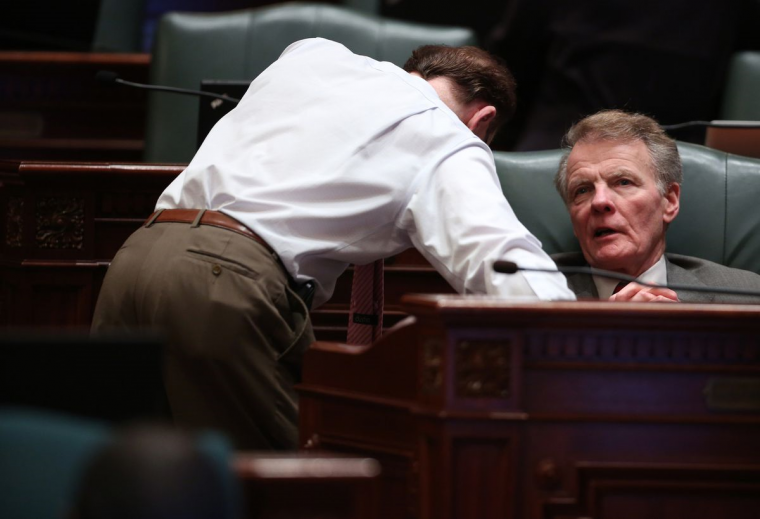 Outsiders may not get it, but it makes some sense that the majority of House Democrats still back House Speaker Michael Madigan’s re-election.

He’s been a genius at getting things done for his caucus. He is loyal to his people and has infinitely more institutional memory and can pull more strings and push more buttons than anyone alive.

In his nearly fifty years in office, Speaker Madigan has been heavily involved with four legislative-remap processes and has been in the House for five of them.

Madigan has played a decisive role in every income tax increase (temporary and permanent) since the tax was established in 1969 — and he was a delegate to the constitutional convention which created it.

He has also negotiated dozens of budgets since he became House Speaker in 1983.

His campaign operation meticulously tracks the number of knocked doors in contested races and every contact made, and he reviews that data each week and calls candidates to provide his feedback. He knows how to win.

And at this moment in history, with redistricting coming up, a huge revenue shortfall, horrific budget problems, a massively-destructive pandemic causing rampant suffering and, in less than two years, a mid-term election under a Democratic president (with a new map), most of his members are rightly worried sick.

For these and many other reasons, this is exactly the moment when his members would need Madigan the most, and he most certainly knows this and is deftly playing on that angst as 19 of his members are in open revolt.

But the sweeping and aggressive federal investigation is this close to Madigan now. Despite all of his protests of innocence and some reasonable arguments that he did nothing illegal, the G is obviously after Madigan’s head.

Governor JB Pritzker has taken loads of heat for not pushing Madigan out of office, even though he couldn’t do it if he tried. Governor Pritzker is up for re-election in 2022 and a Madigan re-election would certainly mean big trouble. Yes, Pritzker won by 16 points two years ago, but that was during an unpopular Republican president’s mid-term against a super-weak incumbent. He’s going to have to hustle to win.

A gubernatorial confrontation with a re-elected Madigan is inevitable.

Pritzker pledged during the campaign and ever since taking office that he will veto a legislative redistricting plan that isn’t “fair,” which was defined (by me) in March of 2018 as any proposal “that is in any way drafted or created by legislators, political party leaders, and/or their staffs or allies.”

So when Madigan told the House Black Caucus during a recent private meeting that he is the best person to draw the new map, he guaranteed that Pritzker had to veto it. There will be no finessing Pritzker’s pledge. And overriding a veto will be hugely difficult because suburbanites who ran as good-government types in swing districts and true-blue progressives are gonna be in a major quandary. It’s pretty difficult to see how this fight gets as far as an override showdown.

Madigan also said during the meeting that he was prepared to pass another income-tax increase if the governor requests it. Like with his remap pledge, his statement likely killed the already-very-slim prospects for a tax hike.

Just imagine the governor (or any vulnerable Democrat) running in 2022 with Madigan still in office, a Madigan-drawn district map in place, and a Madigan tax hike. Maybe the Democrats will get lucky and the Republicans will nominate unelectable far-right candidates, but basing your plan on your opponent collapsing is never a wise idea.

So it’s just difficult to see how Madigan can keep all the re-election campaign promises he’s making.

If he wants to avoid the risk of a new district map being possibly drawn by the Republicans after a losing veto fight, he’ll likely have to submit to a new process which won’t be nearly as advantageous to his members. A Madigan-backed tax hike is pretty much out of the question. Same goes for a gimmicky Madigan budget. And while he’s been the patronage and fixer king for decades, how much can he actually accomplish for his members when he’s under this horribly dark cloud?

No matter what, Madigan still has his unmatchable campaign prowess going for him. But if he somehow manages to flip enough votes to get re-elected in the first place and the feds don’t take him out, the reality going forward will be much different than he’s making it out to be.