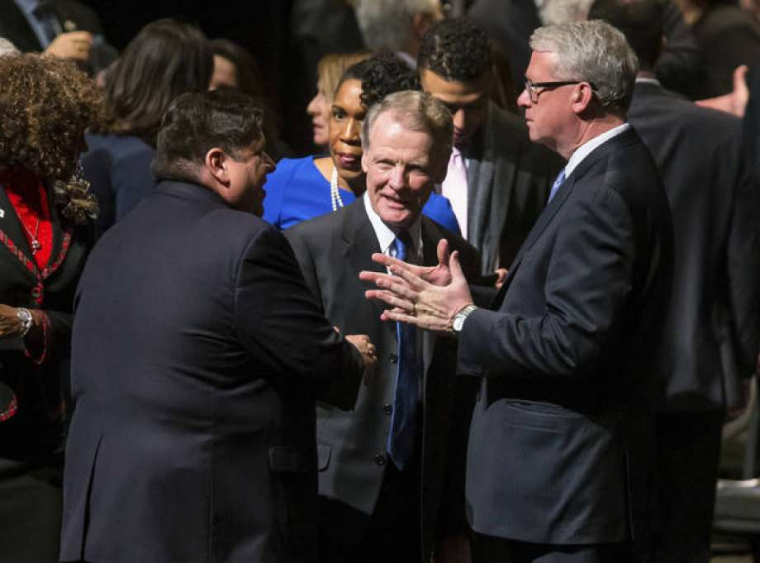 A recent poll shows Illinoisans strongly approve of Governor JB Pritzker's handling of the COVID-19 outbreak in Illinois, and an even higher number supports his stay-at-home order.

The We Ask America/Capitol Fax poll of 800 registered voters taken April 23-24 found that 71 percent approve of Pritzker's handling of the state's response to the outbreak, while just 23 percent disapprove.

A whopping 77 percent support Illinois' current stay-at-home order, while only 18 percent oppose it, and just 4 percent don't know. And 59 percent say they strongly support the order, while just 8 percent strongly oppose it.

Meanwhile, the state is split on President Donald Trump's handling of the pandemic. While 48 percent support his handling of the nation's response, 49 percent disapproves. Three percent didn't know. The poll's margin of error was +/-3.46 percent. Forty percent of respondents were reached on their mobile phones.

The cross-tabs also had really bad news for suburban Republicans, who already appeared headed for yet another harsh November before this COVID-19 crisis began.

President Trump performed poorly in the suburbs in 2016. The GOP's suburban losses mounted in 2018, and 2020 was looking like it could be even worse. Republican legislative leaders have not yet raised the sort of money they'll need to fend off suburban Democratic challenges.

According to the poll, 52.5 percent of collar-county voters disapproved of President Trump's handling of the COVID-19 outbreak, compared to 47 who approved.

Those same collar-county voters approved of Governor Pritzker's handling of the crisis 76.5-17. Those are better marks than Pritzker received from suburban Cook County voters, whose split was 70.5-25. That's notable because Republicans have already lost a lot of their foothold in suburban Cook, but still had significant strength remaining in the collars. If that poll is right, and those numbers hold... whoa. But it gets worse.

Another 57 percent of collar-county voters were more worried that states might lift their stay-at-home orders too quickly, versus 22 percent who worried they'll lift them too slowly. Again, those are "better" numbers than suburban Cook voters, whose split was 54-23.

And 81 percent of collar-county denizens supported Illinois' stay-at home-order, while just 17 percent opposed it. Again, those are better numbers than among suburban Cook County voters, who backed the order 77-20.

"80-percent issues" have long been pretty nearly impossible to find in this fractured country. They are campaign unicorns. Using issues in that percentage-range can very effectively "move" voters one way or another. And, perhaps unsurprisingly considering the other results, more collar-county voters "strongly" supported the order (62 percent) than suburban Cook voters (56 percent).

Polls are just polls and subset numbers are less reliable than the full poll. But after looking at several national surveys and polling from other states, it's difficult not to conclude that these gubernatorial stay-at-home orders are, at least for right now, a new "third rail" of politics. Opposing them appears to carry great political risk in urban and suburban areas.

Now, throw the lawsuits against the stay-at-home order filed by Republican state Representatives Darren Bailey and John Cabello onto the fire, and you can see why suburban Republican legislators are reaching for the antacid.

The Republican legislative leaders are powerless to stop this behavior. As they've steadily lost suburban seats, down-staters have become a much more powerful voice in the party. And those down-staters are increasingly taking a hard-right turn since the ascension of Donald Trump.

I asked House Republican Leader Jim Durkin's spokesperson if Durkin supports or opposes these lawsuits. "Leader Durkin is not planning on filing any lawsuits and as a firm believer in the judiciary system, he will follow the court's decision on this important issue."

Not exactly a profile in courage there, but, if present trends continue, Durkin may not have many suburban members left after November and he's up for reelection as caucus leader next January. Not that anyone appears to be craving to take his job at the moment.

Things can always change. The reason "80-percent issues" are so rare these days is because people changed their minds.

It seems unlikely that suburbanites are going to line up behind the current leadership of the stay at home opposition, however.