Pritzker and Harmon: The Best of Frenemies 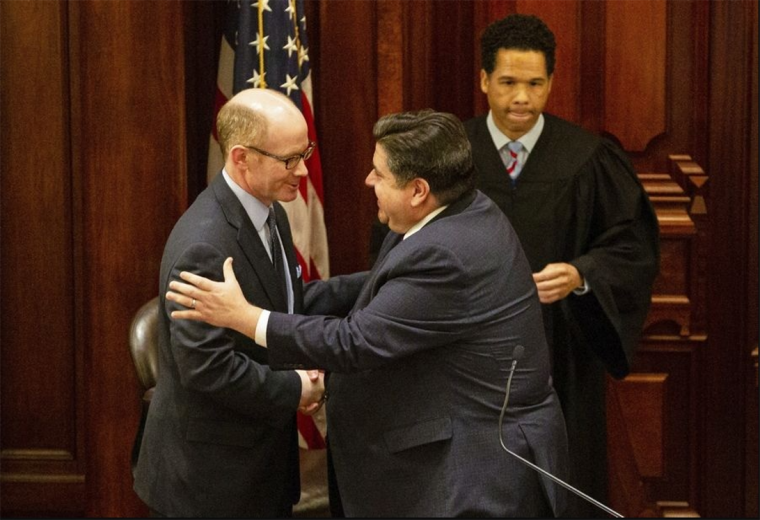 At the end of August, after the Illinois Senate had been unable to find a consensus on the massive climate/energy bill, and punted the issue to the House, I asked Senate President Don Harmon during a press conference why he hadn’t addressed Governor JB Pritzker’s list of problems, legal and otherwise, with the Senate’s proposal.

“I don’t know if the governor’s team understood how fundamental some of those provisions were to getting the agreement among all stakeholders,” Harmon replied.

That seemed to me to be quite an extraordinary statement about the governor and his team.

So when I did a one-on-one interview with Harmon the other day, I asked whether that misunderstanding had been a continuing problem during negotiations, because some folks in the governor’s office were saying at the time that Harmon and his team didn’t quite grasp the implications of what they were proposing.

Harmon pointed out that, since the Senate was convening the talks, “our team was familiar with all the details and all of the trade-offs” in the proposal. Some of the suggested changes coming from the governor’s office, Harmon said, “would have so up-ended the negotiations and the accommodations that had been reached, people would have walked away from the table.”

I am far from the only person who has picked up on the ongoing tension between Harmon and Governor JB Pritzker and their respective staffs. Harmon backed his then-Senate colleague, Daniel Biss, in the 2018 Democratic gubernatorial primary. Governor Pritzker not-so-covertly backed Kimberly Lightford in the Senate President’s race that Harmon won. But the tension between the two offices seemed to boil over at times during the climate/energy talks.

“I’m a JB Pritzker fan,” Harmon insisted. “He and I have known each other for thirty years. We have always been friends.”

“Let me just talk about my relationship with him,” Harmon continued, then repeated something he’s said often in the past when asked about this topic. “He and I probably agree on 99 percent of policy issues. I think we might have a harder time figuring out what one percent we disagree on.”

But then Harmon talked about some things that I don’t think he’s discussed publicly before.

“My job as Senate President is to try to encourage the Senate to be as productive and as responsible as the chamber can be. My job vis-à-vis the governor is to advise him as to what legislation can pass and in what form it can pass, and sometimes to tell him something can't pass.

“So I will continue to give the governor the best advice I can as to how to get his legislative agenda through the Senate and the General Assembly. Sometimes he will listen to me, sometimes he won't. That's fine.

“And while we always seem to agree on policy, we might disagree sometime on tactics. That's okay, too. I think it's a sign of a healthy and productive relationship.”

So I asked Harmon, that’s how you define your relationship with the governor? Healthy and productive?

“I think our staffs are both extraordinarily and understandably protective of us,” Harmon replied.

That was quite an understatement, to say the least. The two staffs have often been openly hostile. But he is right that they are very protective of their respective bosses.

Speaking of governors, I asked Harmon if he thought that the House and Senate Republicans grew too financially dependent on wealthy Republican Bruce Rauner during Rauner’s term in office and two statewide campaigns. Rauner put millions into electing other Republicans, particularly early on.

“I do,” Harmon said. “It's hard to raise money,” he continued. “I know this even better now that I’ve raised money as Senate President for the caucus. It takes a lot of work. It takes a lot of trust and relationship. And anytime you're too dependent on one person or one interest, it leaves you vulnerable.” I’m assuming that goes for the current governor, too.