Pritzker Took the Road Less Traveled — and It Amounted to Bubkes 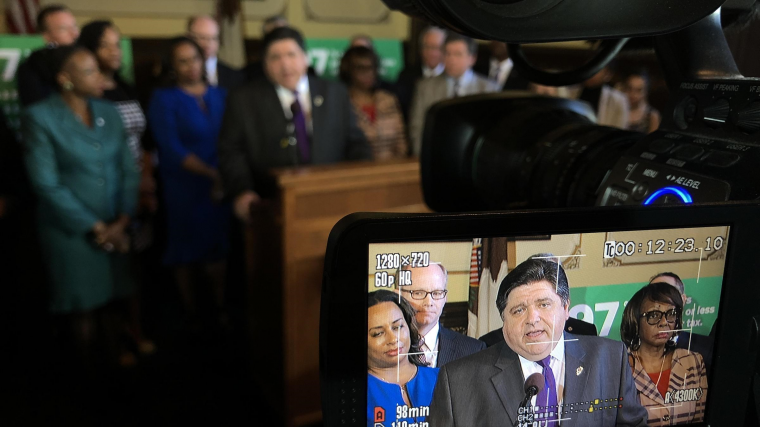 “What if” games are never quite accurate, but I don’t think it’s a stretch to say that Governor JB Pritzker had the opportunity, and most probably the votes, to balance the state budget with an income-tax hike during 2019, his “honeymoon” year with the General Assembly.

Instead, the governor came into office and proposed what was essentially a pension payment holiday and other magic budgetary solutions.

I was told in early 2019 by a high-level administration figure with influence over the budget that the Pritzker administration would not take the “easy” route of raising taxes and wanted to instead focus on the “hard” choices.

But hiking the flat tax to balance the budget ahead of a hoped-for 2020 change to the state constitution to allow for a graduated-income tax would not have been the “easy” route. A pension holiday was the easiest route he could’ve possibly taken. There was nothing “hard” about that, except for convincing legislators that shorting the pension funds was the right thing to do.

Pritzker’s budget was eventually saved by an unexpected tax-receipt boost in the spring, which eliminated the immediate need for a pension holiday, budget cuts, or a new revenue infusion.

And then came 2020, the mother of all lousy years.

The international pandemic has punched all states and local governments in the fiscal gut. But the lack of preparedness hit Illinois even harder.

The state’s current revenue situation isn’t that bad in comparison to last fiscal year, partly because the state income-tax filing deadline was moved from April to July, which is in the current fiscal year.

The immediate deficit projection has been lowered by $2 billion because the state is borrowing that money from the Federal Reserve, less than half the $5 billion it was eligible to receive.

That borrowing leaves the state with a $1.9 billion or so hole to fill by June 30, and Pritzker outlined $711 million in unilateral cuts last week.

$75 million of those reductions relies on an agreement with the American Federation of State, County, and Municipal Employees (AFSCME), and the union appeared to reject the notion out of hand. Then-Governor Bruce Rauner’s attempt to wipe AFSCME out of existence backfired so badly that the union has been strengthened to the point where even asking for minor concessions is beyond difficult.

The governor pointed to the failure of his Fair Tax proposal as a big reason for the need to make cuts, and AFSCME countered by saying it was also all-in on the graduated-income tax. But while Democratic presidential candidate Joe Biden lost Sangamon County to President Donald Trump by just 4.3 percentage points (way down from Trump’s 9-point winning margin in 2016), the Fair Fax lost AFSCME’s home-base county by a whopping 26 points.

We can’t go back and change history, and it’s often maddening to engage in the exercise. But, if the governor had just done the responsible thing in 2019 and used a flat-tax hike to balance the budget when he could’ve drawn on an almost-infinitely deep well of goodwill among his super-majority legislature, we wouldn’t be in nearly this mess right now. And he could’ve then painted the 2020 constitutional amendment vote as a very real and substantial income-tax cut for 97 percent of the populace instead of the few dollars he ended up promising.

I’m only writing this now because when I laid out this very scenario in an early 2019 meeting with that high-level Pritzker person who has significant budget influence, I was laughed at and waved off with “We’re not taking the easy way out with a tax increase, Rich.”

Also, the governor said that he’ll need the General Assembly’s cooperation to make more cuts than the $711 million he outlined. That’s not totally true. Under Rauner, the vast majority of the state’s budget was put on auto-pilot, either by statute or by judges. A big chunk of that money falls under various consent decrees entered into by the state. The administration could attempt to change those consent decrees without any help from the legislature. But doing so would bring enormous heat on the governor because those consent decrees involve things like minimum funding and staffing levels for the state’s care of children.