Robin Kelly and Dick Durbin, Oddfellows Out in a Recalibrated Assembly 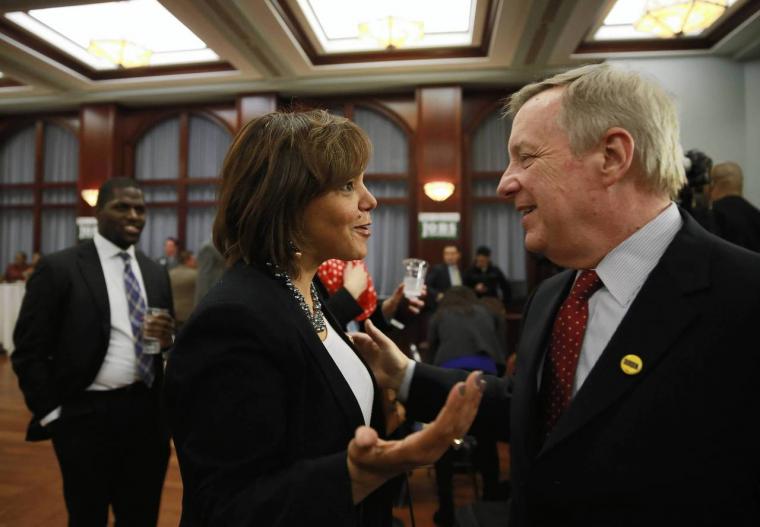 One of the biggest unsung winners in the fight for control of the Democratic Party of Illinois is House Speaker Chris Welch.

The new state party chair is Representative Elizabeth Hernandez, a member of Welch’s leadership team. Hernandez handled the delicate task of overseeing the redistricting effort in her chamber last year. She is quite popular in her caucus, including among Latino progressives, who note that Hernandez has been with them on very important votes despite her background as a “regular” Cicero Democrat. That voting record helped seal the deal when progressive US Representative Chuy Garcia decided to flip from supporting US Representative Robin Kelly for party chair last year to backing state Rep. Hernandez this time around, taking the other Latino state central committee members with him in the process.

It’s no big secret that Speaker Welch has worked hard to develop close ties to Governor JB Pritzker. Welch has eschewed the sort of political games that Senate President Don Harmon has occasionally played with the governor. As a result, the governor could be confident that Welch wouldn’t try to pull Leader Hernandez’s strings. And Welch helped bring votes to Hernandez’s bid, which put her over the top. Pritzker couldn’t have done this without Welch.

Chair Kelly regularly boasted of the party’s hefty $2 million bank account, but she never mentioned that the $2 million had been moved by former House Speaker Michael Madigan to the state party from the now-defunct House Democratic Majority committee shortly after he resigned as House Speaker. Welch has been trying to get that $2 million released by the party ever since, to no avail.

Speaker Welch was also reportedly frustrated with the state party’s demands over the party’s postage-discount rate, which could be worth as much as $3 million to the House Democrats in the upcoming fall campaign.

It also probably didn’t help matters much that the state party’s general counsel, Michael Dorf, performed some campaign legal work for Abdelnasser Rashid during his successful primary bid against sitting state Representative Mike Zalewski (D-Riverside). Because of Chair Kelly’s very real federal legal limitations on her state campaign-related activities, Dorf had been listed as the state party’s chair in its official filings with the Illinois State Board of Elections. Needless to say, it wasn’t a good look for him to be doing legal work against a Democratic incumbent.

So, there was almost no downside for Welch to throw in with Pritzker in the battle over who would lead the state party.

The Hernandez win is widely seen as a big victory for Pritzker. But it’ll also hopefully help normalize the party down the road. Governors tend to control their respective state parties, for good or ill. Illinois Democrats have for years been a notable exception to that rule. Republican governors here have always run their state party organizations, but not the Dems.

Part of the reason for that is because the Republicans controlled the governor’s office for 26 straight years, which created an enormous Democratic Party power vacuum that was filled by whomever could muster the votes. When Speaker Madigan figured out that the state party could save him tons of money on campaign postage, he put his own person in, and then finally replaced that person with himself. The party apparatus eventually became little more than a vehicle for sending reduced-cost House campaign-mailers and a power center for a politician who regularly defied governors of his own party. Kelly promised to change all that, but in doing so she neglected to consider the impact on the legislative caucuses.

Kelly was backed from the start by US Senator Dick Durbin, who set up a successful shadow party operation years ago as a counterbalance to Madigan. Senator Durbin has done quite a lot to build his party over the years, including recruiting numerous congressional candidates and an early insistence on turning the formerly solidly Republican Will County into a Democratic powerhouse.

But Durbin overreached by grabbing at the state party mantle, alienating the governor and US Senator Tammy Duckworth, both of whom are on the ballot this year. Kelly’s decision to run a scorched-earth campaign late in the game by claiming through surrogates that the governor and his allies were somehow racists injected even more hostility into the relationship between Pritzker and Durbin that has never been anything close to good.

Point being, once Pritzker leaves office, the next Democratic governor (whenever that is) will likely benefit from the precedent set by this intra-party battle.