For the Sake of Getting Anything Done in Chicago, Mayor Lori Lightfoot Needs Friends and Allies Downstate 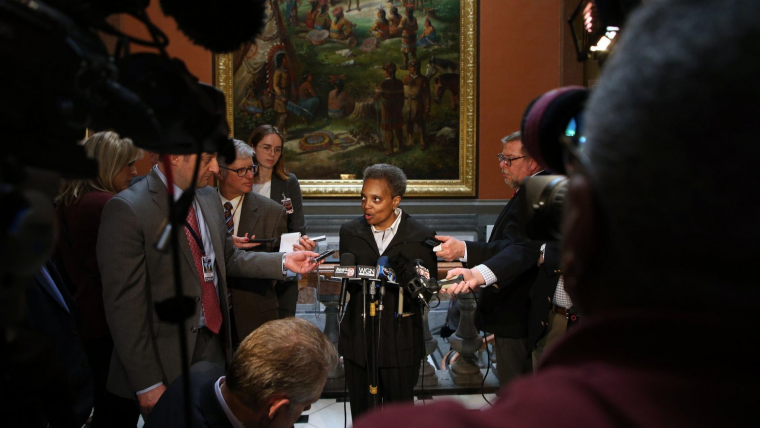 One of the points that Governor JB Pritzker has made since Chicago Mayor Lori Lightfoot began using the news media to ask for a multi-billion-dollar state-pension bailout is that other parts of Illinois are having the same problems as our largest city.

Rockford is one of them, as the governor noted last week. Its first-responder pension funds are in horrible shape for pretty much the same reason as so many others are: The state didn't require local governments to fully fund those particular pension funds, so a large number of locals just didn't do it.

Sufficient local contributions have long been required by state law to the Illinois Municipal Retirement Fund, the unified statewide pension system for almost all other local government retirees. Consequently, the IMRF has always ranked among the best-funded systems in Illinois.

Locals are now required to do the same for police and fire pensions and the squeeze is real. In typical top-down Statehouse fashion, local governments were simply ordered to fix their first-responder pension-deficits without any sort of help from the state.

Rockford Mayor Tom McNamara claimed not long ago that by 2025 pension payments will consume an eye-popping 60 percent of his city's annual budget.

Governor Pritzker has flatly ruled out any sort of state assumption of local pension liability. He explained, with strong evidence, that doing so could quickly hurtle the state's bond rating into junk territory. He talked about some pension-fund consolidation, but only for administrative functions and investments, which would save some money, but only on the edges, and mainly for smaller funds. Full consolidation of liabilities would probably not go over well with local governments, which have healthy pension funds.

Something clearly needs to be done about this mess. Governor Pritzker himself has repeatedly admitted that high property-taxes are driving businesses out of state.

But, unlike his two immediate predecessors, Governor Pritzker will not support pension-benefit reductions (which would be unconstitutional anyway, without changing the state's constitution, which is politically not possible and might only be doable for new hires even if it could be accomplished, which it can't). And, unlike the man he defeated last year, Governor Bruce Rauner, Governor Pritzker won't favor allowing local governments to cut their operating costs by unilaterally slashing benefits earned through the collective-bargaining process.

That leaves revenue. But Governor Pritzker won't support a politically unpopular tax on retirement income that Mayor Lightfoot foolishly floated. Anyone paying even the slightest bit of attention to last year's Democratic gubernatorial primary could see Governor Pritzker's aversion to that tax and how he used the issue to successfully bludgeon his top-two opponents. I have no idea what she was thinking, but she ought to fire whoever came up with the idea. And if it was her idea, she needs to learn from that blunder, or she's got a very rocky road ahead of her.

What this rookie mayor doesn't yet seem to quite grasp is that if she wants state help for her city then she has to make friends and allies. And you obviously don't do that by allowing the state's leaders to be blindsided by a tax proposal which has zero chance of being considered, let alone passed.

You also don't make friends by setting up the governor and the General Assembly to take the blame for your own failure. They aren't the city council, which can be pressured into standing at the new mayor's command during an inauguration ceremony. Just ask Rauner how that sort of governing style worked in Springfield. Actually, don't ask him, because he probably still thinks he did everything right.

Mayor Lightfoot has a governor and two Democratic legislative leaders with super-majorities who live in her city and want her to succeed. But, as important as her city is, it is not an island. The mayor needs to make common cause with Downstate and suburban mayors to push for realistic solutions.

A local service-tax option, which the mayor said she now supports as an alternative to that retirement income-tax, might possibly be one way to do it. But it most certainly won't happen unilaterally. Nothing will.