As Sartre and Camus Could Have Told You, Hell Is Other Reporters – Particularly During Pandemics 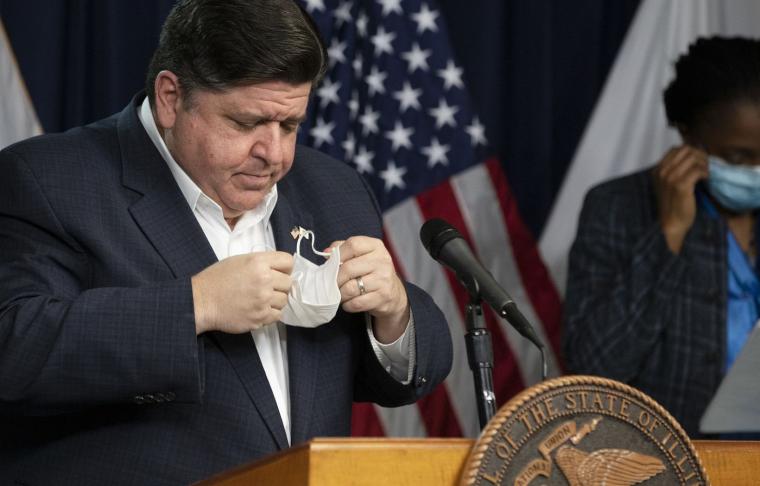 The First Amendment to the US Constitution prevents government intrusion on journalists' rights to tell their stories and your rights to read or watch or listen to them.

But that means things can get messy. Some reporters can make everyone else look bad.

"There are no bad questions," is something I learned growing up. But after doing this job for a number of years, I'm here to tell you that, yes, there are bad questions.

I've been guilty of that over the years. Heck, I messed up my own remote question to the governor on April 24 because I got into a hurry and mistyped it. Oops.

Too often, though, Governor JB Pritzker's daily press conferences have become a theater of the absurd.

We're in the midst of a global crisis that might eventually prove to be empire-changing. On top of the massive health scare, the nation is suffering through its sharpest employment and business collapse in its entire history. And on top of that, news media-outlets — already reeling from years of corporate greed and systemic readership-changes – are in very real danger of disappearing forever at a time when we desperately need them the most.

So, you'd think that present circumstances would bring out the best in reporters. It definitely has in a lot of them, but it hasn't in others.

We've had the repetitive and even childish "Are we there yet?" sorts of questions for weeks on end during Pritzker pressers, sometimes three, four, or five a day – all asked while hospitalizations continue to rise, the virus continues to spread throughout the state, and deaths have taken an alarming upward turn. It's like some news reporters can't see the news in front of their faces. And, too often, it's those very reporters who are the ones hogging the question period.

Some ask questions that can be answered with simple Google searches. For instance, a reporter recently asked the director of the Illinois Department of Public Health (who appears with the governor every day) how many COVID-19 patients were in the ICU. That information is posted on the IDPH website every day. The briefings aren't supposed to be quiz shows.

And then there are those who advocate for their own personal hobbies or interests.

"Golf courses," a Chicago TV reporter recently told the governor. "People are so anxious just to get out on the green, to be outside. Golf courses. Maybe you could do it in a socially-distant kind of way?"

There are questions, and then there is lobbying. That was lobbying.

The governor clearly said in response to a reporter's recent question that he would definitely not be following the lead of Georgia Governor Brian Kemp when it came to loosening his own stay-at-home order.

Governor Kemp imposed a stay-at-home order and then decided to reverse some of it, and even President Donald Trump repeatedly criticized his flip-flop.

But some reporters acted shocked on April 23 when Pritzker extended his own order. And some of their questions went off the rails. It was perhaps the worst day of all.

A reporter for a suburban newspaper proclaimed: "Many people in rural parts of the state want to quarantine Chicago and the suburbs and reopen parts of Downstate Illinois that aren't seeing infection rates like the urban areas. Why has the state not done that?"

Reporters should give voice to the voiceless, but the governor has repeatedly said the virus is everywhere and quarantining one area wouldn't work and he was rightly stunned.

A talk show host for a small Chicago radio station delivered an extended soliloquy on bankruptcy and Puerto Rico. Another reporter claimed Pritzker had been accused by some Republican lawmakers of "operating in a bubble." Pritzker denied it, and I spent some time looking for an instance of anyone saying that and couldn't find anything. Maybe I missed it.

A reporter for a conservative news site asked how the governor could justify raises for state workers, even though most state employees have binding union contracts, and the governor can't just wave a magic wand to get rid of them. It went on like that for what seemed like forever.

Many, many reporters have asked thoughtful, well-researched and tough questions over the weeks. They are my heroes. But I have been getting an uneasy feeling lately that those questions are being drowned out by the stupid ones, and it's undermining everyone's credibility at a crucial moment in history. We just gotta do better. Myself included.