Jeff Sessions Wants to Double Down on the Drug War 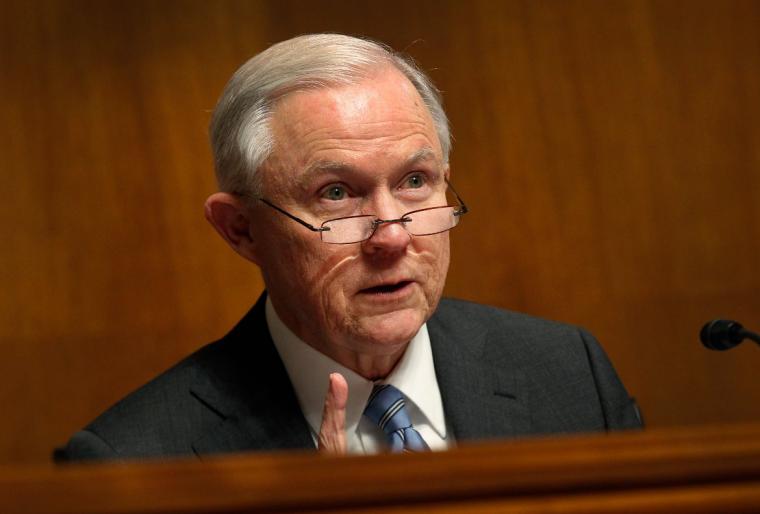 In the 1980s, in conjunction with the escalating war on drugs, police began aggressively seizing cash and property, using civil asset forfeiture to ostensibly cripple drug-trafficking organizations. It’s been almost 40 years, and while many police departments enjoy and have become accustomed to this lucrative revenue stream, most Americans have grown to abhor the practice because of well-documented abuses.

Opposition has been bolstered by fun facts such as this: In 2014, law enforcement raked in more than $5 billion in seized assets, which is more than the total loss from all burglaries for the same year.

And if you doubt that this practice creates a perverse profit incentive, skewing law-enforcement priorities, read what Kenneth Burton, police chief in Columbia, Missouri, had to say about it: “It’s usually based on a need – well, I take that back. There’s some limitations on it. ... Actually, there’s not really on the forfeiture stuff. We just usually base it on something that would be nice to have that we can’t get in the budget, for instance. We try not to use it for things that we need to depend on because we need to have those purchased. It’s kind of like pennies from heaven – it gets you a toy or something that you need ... .”

Even with statements such as that, I suppose that if all forfeiture cases involved proven drug traffickers, some people might feel better. But that’s not the case, either.

A recent Reason.com investigation in Cook County, Illinois, shows that Chicago’s poor neighborhoods are the most frequent targets of asset forfeiture, and in many cases for petty amounts: “Roughly 11,000 seizures in Cook County over the five-year period were for amounts lower than $1,000. Nearly 1,500 were for amounts under $100.”

The Institute for Justice has also chronicled many maddening individual stories of civil asset forfeiture in its excellent report Policing For Profit: The Abuse of Civil Asset Forfeiture.

So it’s not hard to understand why 84 percent of Americans oppose civil asset forfeiture.

But Sessions, undeterred by this growing public concern, said in a speech to the National Association of District Attorneys: “With care and professionalism, we plan to develop policies to increase forfeitures. No criminal should be allowed to keep the proceeds of their crime.”

The problem with this framing is that the government isn’t required to convict before taking your property. In fact, police don’t even have to charge you with a crime. Mere suspicion is sufficient to seize your property. And if you want your stuff back, you must go through a costly court proceeding to prove your innocence. The bedrock principle of innocent before proven guilty is flipped on its head with asset forfeiture.

An Institute for Justice report explains the legal shenanigan: “This evasion of the criminal-justice system is based on a legal fiction in which property thought to be connected to an alleged crime is considered ‘guilty’ of having somehow assisted in the commission of that crime. In criminal forfeiture, the government proceeds against a person charged with a crime; in civil forfeiture, the government proceeds against property.”

Sessions attempts to allay fears, saying he will use “care and professionalism” and use the law to target drug traffickers, but the well-known track record demonstrates the need for more than good intentions to rein in the use of asset forfeiture.

In 2015, the Justice Department under Eric Holder took a modest step in the right direction by banning the particularly egregious policy called “adoptive seizures,” a legal loophole that allows state and local police to circumvent state laws that restrict civil asset forfeiture. That which is illegal under local law becomes legal when police, after seizing property, refer the case to a federal agency and split the loot; 80 percent goes to the local police and 20 percent to the feds.

Sessions reversed this ban, saying, “Adoptive forfeitures are appropriate, as is sharing with our partners.” This comment drew a round of applause from the hundreds of law-enforcement officials in the audience at the Minneapolis convention center where the speech was delivered. But many across the political spectrum don’t share their enthusiasm.

Kanya Bennett, a legislative counsel for the ACLU, said, “Civil asset forfeiture is tantamount to policing for profit, generating millions of dollars annually that the agencies get to keep.”

Senator Rand Paul said he opposes “the government overstepping its boundaries by assuming a suspect’s guilt and seizing their property before they even have their day in court.”

Senator Mike Lee brought up constitutional concerns, saying, “Instead of revising forfeiture practices in a manner to better protect Americans’ due-process rights, the DOJ seems determined to lose in court before it changes its policies for the better.”

And in an opinion in April, Justice Clarence Thomas strongly signaled that the DOJ could lose in court if the right case comes along, saying, “This system – where police can seize property with limited judicial oversight and retain it for their own use – has led to egregious and well-chronicled abuses,” and that law enforcement agencies “frequently target the poor and other groups least able to defend their interests in forfeiture proceedings.”

With his latest speech, Sessions continues to buck a recent trend of criminal-justice reform. While many are pushing to curb the worst excesses of the drug war, or to end it completely, Sessions is determined to continue the battle.

Many look at the decades of drug prohibition and see huge costs and counterproductive results. Not Sessions. He has an unshakable faith in the policy, believing that we simply need to enforce drug laws with more vigor and not let any pesky due-process protections get in the way.

While discussing the need to combat violent crime and gang activity, Sessions said: “We can never cede a single neighborhood or a block or a street corner to gangs and thugs. Poor people, minority citizens deserve the same protection and public safety as everyone else in this country.”

These same poor people – and all Americans – deserve the constitutional protection against having their property seized by the government.

Regan Hines is a filmmaker and partner at Life Is My Movie Entertainment. This article was originally published by the Foundation for Economic Education (FEE.org).