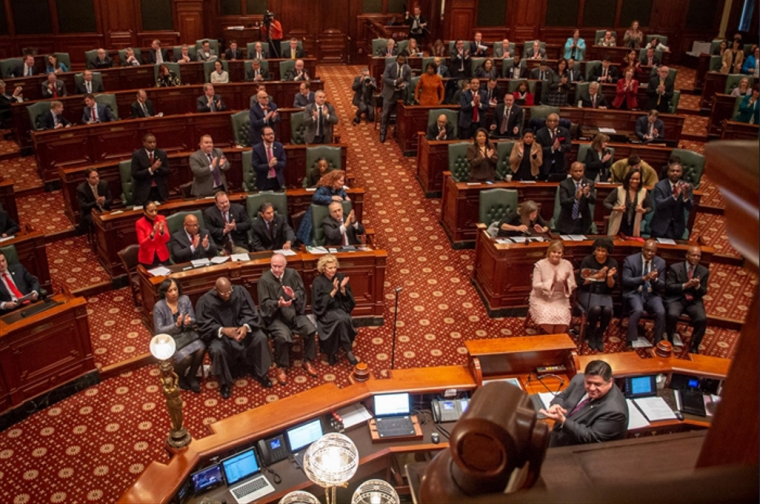 I think by now you can see why Governor JB Pritzker’s campaign spent so much money over the past month or so on TV and digital ads touting the state’s improved fiscal position.

Illinoisans have been (accurately) fed fiscal horror stories about their state for decades. I don’t have to tell you that Illinois is infamous for its fiscal ineptitude on a grand scale. I wrote years ago that, collectively, we suck at governing here. Huge pension-debts, constantly on the verge of a junk-bond rating from New York, a narrow tax-base that doesn’t tap into services and upper incomes, and governors who either don’t care about the consequences of their decisions or are too inept to fix or ameliorate the problems they know exist.

So those ads, I believe, were aired in order to prepare the ground for the governor’s budget proposal he submitted last week.

“For the first time in more than twenty years,” a television news anchor says in one of the ads, “a bond-ratings agency upgraded Illinois’ credit rating.”

“This upgrade means lower costs for tax-payers,” another anchor explains.

“JB’s straightening out the state’s finances, passing balanced budgets, and getting bills paid on time,” a guy named Bill Hincks claims in another ad.

Team Pritzker could see the spending and revenue numbers as they came in for the past few months and they knew that the state had at least temporarily turned the corner.

But they also likely knew they needed to get the word out there before the governor laid out his new budget, which will pay down debt and temporarily cut taxes so people would be more likely to buy into it.

“For years in Illinois, they left bills unpaid, ruined our credit, and racked up over a billion dollars in interest penalties,” Governor Pritzker said in an ad that started running in early January. “As Governor, I was determined to help fix the financial mess. Now, Illinois is keeping its promises by passing real balanced budgets. We’re cutting costs, paying bills on time, and paying down our debt –– saving tax-payers hundreds of millions of dollars. And our credit-rating has been upgraded for the first time in twenty years.”

The Illinois Republican Party responded to that spot by claiming the governor was, “launching a new political ad that laughably tries to convince Illinois families ‘we’re on the right track.’” Everyone pretty much believes the state is messed up, so it’s not a difficult pitch to make.

Pritzker proposed a billion-dollar, one-year tax cut that was widely derided by Republicans, who didn’t mention that two top House Republicans had proposed an eerily-similar temporary tax-cut a couple of months ago. One of those two Republicans is now Republican gubernatorial candidate Richard Irvin’s running mate. Irvin has called the tax cut a “gimmick,” and an attempt to “buy off” voters. I haven’t yet had a chance to ask him about his running mate’s plan.

The governor also wants to direct an extra half a billion dollars into the state’s pension systems to pay down debt, which he says will save tax-payers $1.8 billion in the long run.

The College Illinois savings program was deeply in debt, so Pritzker wants to wipe it out with $230 million, which will save tax-payers even more money down the road.

Almost $900 million will go to pay off a health-insurance debt that the state has had for longer than I can remember. And $800 million will be deposited into the state’s empty rainy-day fund.

The Republicans objected, saying it was all an illusion. The budget coffers are over-flowing with money because of federal stimulus programs. They’re not wrong, but those things I mentioned were all one-time expenditures.

Hey, we’ll see how long this fiscal bliss lasts. One of the reasons these tax cuts and other budgetary moves are one-year plans is because things could go south in a hurry if the federal stimulus programs really do end and state and local governments are again left to fend for themselves. And if we slide into recession, then Illinois could wind up right back where it started: In a very deep hole.

But if it all eventually goes to heck in a handbasket again, I can at least look back with a smile on this relatively brief window of financial pleasantness when I’m old and decrepit. It’s really quite nice. I hope we can keep it this way. But this is Illinois, after all.