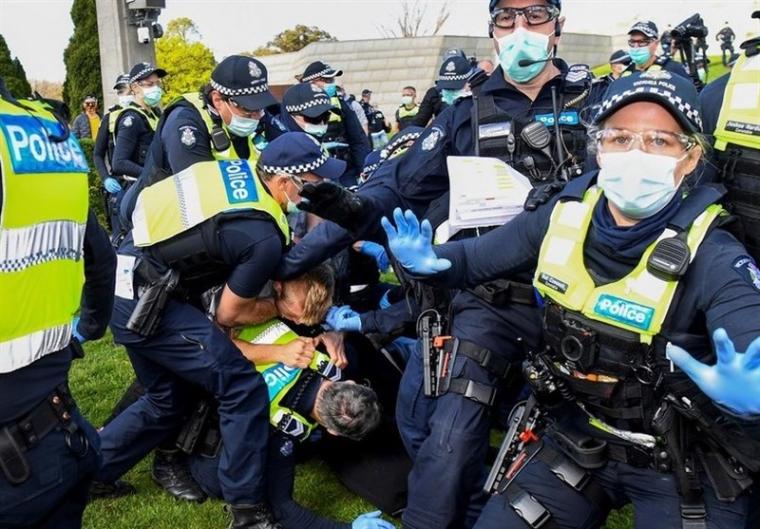 Covid-19 lockdowns, shutdowns and vaccine mandates are a test of public obedience.

Every so often there seems to be a test of the public’s will to check its obedience. As children in once meaningful classes in public school (when I was a kid), we were always taught how the Chinese, for example, could change collective policy overnight because the population did as it was told. That’s why it accepted the "one-child-per-family" rule almost overnight and by edict. This despite the fact that the Chinese people love children to an extreme. This is the sort of fealty you can expect from a vassal state. And it works. The Chinese people do as they are told.

Fealty is now being tested in the Western world as China begins to dominate world economics and industrial production. The thinking is that this success must have something to do with the submissive public-at-large. A submissive population means more productivity and better cash-flow.

Covid came along and opened the door to mass experimentation of fealty and obedience to the state.

The big test beds are the USA, the UK, Australia, New Zealand, and Canada. These nations, make up “Five Eyes”—the international intelligence-gathering cabal that may even be part of the experiment.

This fealty demand and test was expressed in no uncertain terms by Justin Trudeau in a recent speech to the Canadian public. It was about the “obligation” Canadians have to take the vaccine. His mantra was “do the right thing.” None of the speech was about whether the vaccine actually worked and would protect you, no. It was about the obligation. Biden has a similar demand.

Now it seems that the Five Eyes countries are all doing a different experiment to see what works best. There is enough difference to see how the various populations react.

Within the United States itself, states are implementing different vaccination policies under central government guidance. The states that stray too much from the desired experiment (South Dakota, Florida, and Texas) are considered outliers and marginalized to keep the fealty tests on track.

New Zealand with its zero Covid policies shows the best results with the population agreeing to ludicrous lockdowns over nothing – a lone positive test result, for example. But it is already a quasi-socialist country with a very passive population. You can see China walking into New Zealand and taking it over.

You can imagine the same “walk-in” notion with Australia. This is why there are some security fears. So the USA has established bases there, along with promising to equip the Aussies with controversial nuclear subs.

But the Australian fealty experiment continues with onerous lockdowns and demands of Covid vaccinations and mandates. A Resistance has emerged there, the knowledge of which is blacked out by American media out of fear that this information might contaminate the US fealty test, which has fallen into a predictable partisan battle between liberals and conservatives.

What amounts to a sick and cynical situation must end soon.

It’s becoming ludicrous as the number of Covid “breakthrough” infections of those vaccinated rises unabated and as it becomes more obvious that whatever Covid is and wherever it came from, it must pass through the population in some natural way. This is what happened with the 1918 Spanish flu.

That earlier pandemic, if overlaid on today’s calendar, has the Covid crises ending in April-May of 2022.

Meanwhile, the fealty test, to check the obedience of the English-speaking world, needs to be over now. The results are in and they are not pretty for the notion of diverse individualism, self-reliance, and free thinking versus obedience to the state and its media lackeys.

If any damage was done to the population by the experimental therapies posing as vaccines, an apology may come later, or not. There will be a reevaluation of the medical system, which followed centralized rules on how to behave and what to do with patients.

The few outliers (eg. America’s Frontline Doctors) remained in place and complained to a small audience. All these people were kept in check by the rule-followers running social media and other information outlets. So their influence on the fealty experiment was nil.

Ron DeSantis, the governor of Florida, was more responsible for screwing up the test than any doctor prescribing Ivermectin.

DeSantis, along with a few other Republican governors, were not playing along. The media discounted and condemned them all.

The EU also executed versions of the fealty tests. We hear about none of it in places like Russia or Hungary. There is no reporting.

Africa does not seem to be part of the experiment.

The Israeli experiment, where the public fell into line early and followed the rules to an extreme, will be subject to much deconstruction.

How did we do? In the English-speaking nations, we all passed the fealty test, showing our obedience to the state, in general. In some cases, with the reluctant, all it took was a free hamburger.

It could have been better, for sure, but if half the population was ordered to kill the other half, they would obey.

John C. Dvorak is co-host of the podcast No Agenda, available at noagendashow.com.  Dvorak's columns may be read and susbcribed to at dvorak.substack.com.