Trump Bump Had Noticeable Effect Upon Candidates’ Numbers, If Not Their Acumen 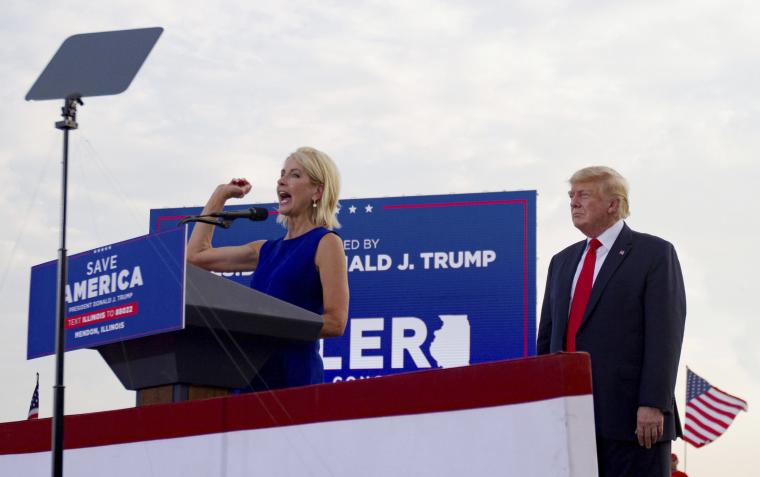 Ogden and Fry conducted a poll in the days leading up to former President Donald Trump’s visit to the Quincy area for a US Representative Mary Miller endorsement in late June.

But if you look at the results from each day, you can see a definite trend. On June 22, Miller’s lead was less than three points, which is about where many of the pundits speculated the race stood at the time.

Now these are really small subsets in a single poll. But Republican gubernatorial candidate Senator Darren Bailey’s results in CD15 in the same poll also showed a slight upward trendline, from 52 on June 22, to 53 the next day, to 55 on June 24.

“Based on where our final polling was on several races, it seems possible that that momentum continued through election day,” explained Ogden and Fry owner Matthew Podgorski, who is also a Republican Party official and candidate. “Candidates that would benefit from a Trump-Bump all did better than expected just days earlier,” he continued. “If highly-motivated ‘Trump/Bailey’ voters showed up on election day while others gave up, several other races may have been affected.”

Podgorski’s statewide polling, for instance, had Tom DeVore ahead of Steve Kim in the GOP attorney-general’s race by four points. DeVore won by almost ten. Podgorski had Kathy Salvi beating Peggy Hubbard, the most visible Trumpist in the US Senate primary race, by “a much larger margin than the [five-point] victory,” Salvi wound up with, Podgorski told me.

Hey, maybe Podgorski’s polls just weren’t accurate and he’s making excuses here. It’s been tried before by others. But I have thought since well before primary day that the Trump visit would likely reverberate throughout the state, up and down the Republican primary ballots.

The Second Illinois Supreme Court District might also be a case in point. The regulars and people like far-right Republican activist Jeanne Ives all backed Lake County Circuit Judge Daniel Shanes in the primary. Instead, Mark Curran, who is known for his outrageous public remarks (“We are taking on the Establishment, the Party Hacks, the Freemasons, and those that could care less that Individual Liberty and Conscience Protection are no longer cherished or protected,” he told supporters last year), won the race by two points with almost no money.

Shanes was supposed to be the beneficiary of $6.25 million in campaign cash from Ken Griffin via the Citizens for Judicial Fairness front group. The committee spent about $200K to help Shanes in the primary and oppose Curran, suggesting that the people running that show were concerned, but still confident that they were doing enough to win.

And now they have $6 million left over and no seemingly viable candidate in the 2nd.

Also, unlike with Senator Bailey and, to a lesser extent, DeVore, the Democrats had nothing whatsoever to do with this Supreme Court debacle. The Democratic Governors Association, the Democratic Party of Illinois, and Governor JB Pritzker himself all paid for advertising that boosted Bailey’s Trump bona-fides. The state party paid for mailers doing the same for DeVore.

Bailey, by the way, has repaid the favor by bungling pretty much every statement he’s made since the day after winning the Republican nomination.

Last week, Bailey memorably urged people to “move on and celebrate” shortly after the Highland Park massacre, even though the shooter was still on the loose at the time. Later in the week, he held a press conference to apologize and try to clean up his own mess, but hit the flub trifecta in the space of just ten minutes. Bailey “conflated state gun-control laws, misidentified a neighborhood in Chicago where violence occurred over the weekend, and even misquoted a Bible verse,” the Chicago Tribune reported.

And DeVore, the Republican Party’s attorney-general nominee, had this to say on Facebook just the other day: “Guess how many of those Republican establishment ‘leaders,' who sat idly by and watched your kids suffer for two years, called me after winning the primary? Zero!! I just might investigate them first before Pritzker!!”