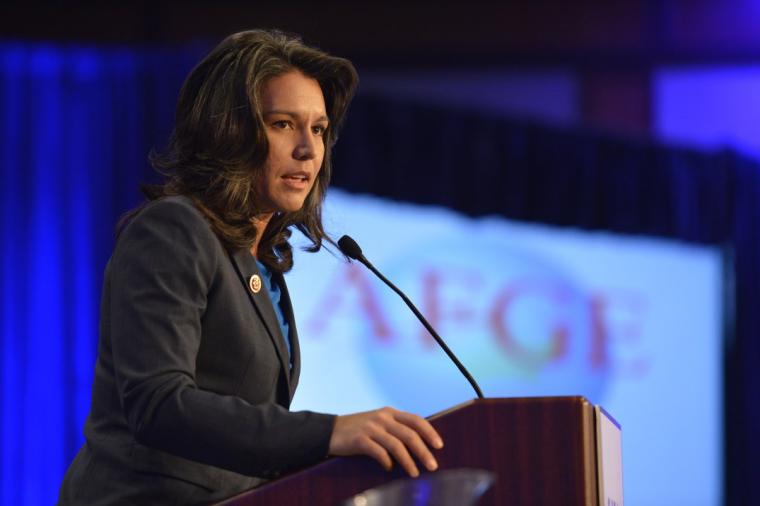 U.S. Representative Tulsi Gabbard in 2013. Photo by the American Federation of Government Employees.

This act seed-funded ($160 million) Executive Order 13721, signed March 14, 2016, establishing the Global Engagement Center (GEC). Our government is now empowered for a real-world role as the “Ministry of Truth” (RCReader.com/y/radar3).

The GEC “shall lead the coordination, integration, and synchronization of government-wide communications activities directed at foreign audiences abroad in order to counter the messaging and diminish the influence of international terrorist organizations ... .”

Do not dismiss this legislation as only another measure to combat terrorism abroad. Just like the unconstitutional mass surveillance of U.S. citizens still occurring under the guise of keeping Americans safe, this new authority is only a matter of degree from full-on propagandizing those it claims to protect.

Meanwhile, it is vitally important to understand that many U.S. laws, statutes, rules, and regulations are arguably unconstitutional but stand because there are no challenges to them. Challenges can trigger judicial review, which, if they are deemed unconstitutional, undoes them. But if no challenges ensue, such acts are implemented unhindered and largely unaccountable. This is as much true for local acts as it is for state and federal ones.

It’s also important to recognize that when laws and regulations are enforced, the financial beneficiaries are often the agencies doing the enforcing – instead of providing remedy and remuneration for those actually harmed. For example, the Department of Justice has successfully fined banks and finance companies billions of dollars for illegal activities, yet not a single corporate perpetrator has been indicted. Equally unjust is that the U.S. Treasury keeps the fines it collects. Only a fraction of what is collected is ever redistributed to depositors, mortgagees, taxpayers, or any other real victims.

Who is ultimately at fault for this practice? We the People are ... and yes, that means you, too.

This Young Leader Has the Courage of Her Convictions

U.S. Representative Tulsi Gabbard (D-Hawaii) recently returned from a seven-day trip to Syria and Lebanon to learn firsthand what was really going on. No amount of marginal reporting and/or media censorship can ultimately ignore the massive suffering caused by U.S. intervention into Syria in a futile attempt to oust President Bashar al-Assad.

Gabbard – with guidance and support from former U.S. Representative Dennis Kucinich (D-Ohio), who accompanied her on the trip – observed the epic human suffering and was given an impromptu opportunity to visit with Assad personally. Needless to say, many of her fellow members of Congress on both sides of the aisle were apoplectic over her hubris in embarking on such a mission without the political leadership’s permission.

Gabbard warned: “The U.S. intervention in Syria’s civil war is not helping ‘moderate’ freedom-fighters take on the Assad regime, but is actually propping up terrorists associated with al-Qaeda and the Islamic State in Iraq & Syria” (RCReader.com/y/radar4).

In a 2014 warning to Congress – when it slipped in a two-year extension to equip and train moderate Syrians in its defense-spending bill – she said: “From Iraq to Libya and now in Syria, the U.S. has waged wars of regime change, each resulting in unimaginable suffering, devastating loss of life, and the strengthening of groups like al-Qaeda and ISIS” (RCReader.com/y/radar5).

Both Gabbard and Kucinich have been vocal opponents of U.S. intervention in Syria, condemning the continued arms aid to al-Qaeda and ISIS as a relentless, wrongheaded effort to unseat Assad. The mass migration of Syrian refugees is directly attributable to the exponential increase in death and despair inflicted on the country’s people by this brutal civil war, in turn creating socioeconomic crises across the Middle East and Europe.

In the fall of 2016, Gabbard called for a House Resolution to stop an arms deal for $1.15 billion to Saudi Arabia, contending that Saudi Arabia is the number-one promoter and financier of Islamic extremism – giving support to ISIS in Syria and waging an air war in Yemen, dropping cluster bombs that have killed thousands of innocent Yemeni civilians (with quiet air support from the U.S. military).

Gabbard further put her money where her principles are by sponsoring H.R.608 to prohibit the use of U.S. government funds to provide assistance to al-Qaeda, Jabhat Fateh al-Sham, and ISIS, and to countries supporting those organizations.

If by some miracle such a bill passed, what a vastly different world this would be.