Voting Blocs Prefer the Madigan They Know ... for Now 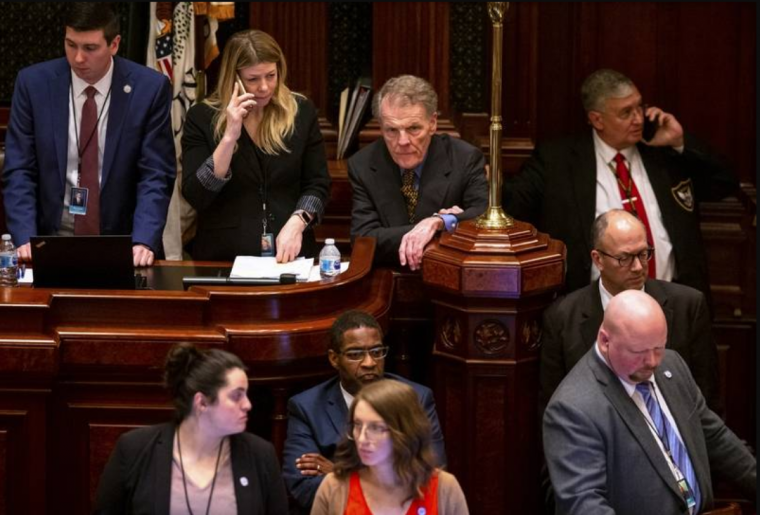 The calls were mostly brief and to the point, recipients said. House Speaker Michael Madigan just wanted to know where his members stood last week after two of his members demanded he step aside as House Speaker and Democratic Party of Illinois chairman.

Did they agree with their fellow Democratic state Representatives Terra Costa Howard and Stephanie Kifowit that he should resign? he asked.

Enough said they did not agree that Madigan issued a statement hours later saying the feedback he received was positive and that he had “no plans to resign.”

The House Black Caucus, for one, appears to be mostly sticking with Madigan. That's really no surprise. He's been loyal to African-American members for years — killing or altering bills they opposed, protecting their districts even after Chicago lost almost 200,000 African-Americans in the last census, etc.

But it goes deeper than that. African-American legislators, like most African-American people, all know someone who's been falsely accused of a crime, be it family, friends, or constituents. Most are strong backers of social-justice reforms. Several told me it would be counter to what they stood for to turn on Madigan now. The same goes for many Latinx legislators. If those two caucuses ever turn on him, though, the party is over. And Madigan surely knows that.

Most “regular” and Downstate Democrats also appear to still be with Madigan. He's been good to them as well, and the next Speaker might be far more liberal than they'd prefer.

And then there's organized labor, which has long supported Madigan, but then welded themselves to him during the Bruce Rauner years when the Republican governor was trying to kill them off. Labor is the largest source of campaign cash and precinct workers in the state. Cross the unions and you have few other places to turn to for help. Few Democrats will risk this.

Many of the House Democrats I spoke with last week made a "stability" argument. They complained that the people demanding that Madigan resign haven't presented an alternative to Madigan. Who, for instance, would handle the fundraising and the precinct work and everything else involved with winning elections this fall if Madigan suddenly departed? Who would lay the groundwork for the fall veto session? Creating a sudden void with no alternative just didn't make sense to them at this moment, although that may very well change if any of his close associates are indicted, some admitted.

Black Caucus members I spoke with almost uniformly pointed to their own internal confusion and stagnation since May when their caucus chair Kimberly Lightford abruptly resigned. They and other Democrats also talked about the brutal infighting within the Senate Democratic caucus after Senate President John Cullerton unexpectedly retired last year. A Madigan departure would be ten, twenty, fifty times worse than any of that, they said, and they're probably right.

In my conversations with Black Caucus members, I was told that they hadn't received a single constituent phone-call about Madigan since the ComEd deferred-prosecution agreement was revealed. Their constituents, I was told, are totally focused on things like crime, unemployment benefits, and navigating through everything else wrought by the pandemic. In other words, they're preoccupied with life during particularly hard times and just don't care about MJM.

I'm not trying to defend or justify any of this, by the way. I despise treating politics like a one-dimensional cartoon. There's more going on than may meet the eye with a cursory glance at the headlines.

On the other side of the spectrum, first-term suburban women have their own issues to deal with.

Many of their constituents are indeed making angry calls about Madigan. The speaker's money and talent may not be enough to save some of them in the face of all this scandal with ComEd and maybe other companies which have more recently been subpoenaed. And as I've told you before, the system Madigan built works only as long as his members believe he can protect them from their opponents. Once that confidence is gone, he serves no purpose.

More importantly, this situation is most definitely not why they signed up for a political run. A lot of these folks were activated after Hillary Clinton's 2016 loss. So, being connected in any way to an alleged bribery scheme likely makes their skin crawl.

It appears that Madigan has bought himself some time, for now. But if more people are charged and the feds get even closer to him, that may not turn out to be enough.