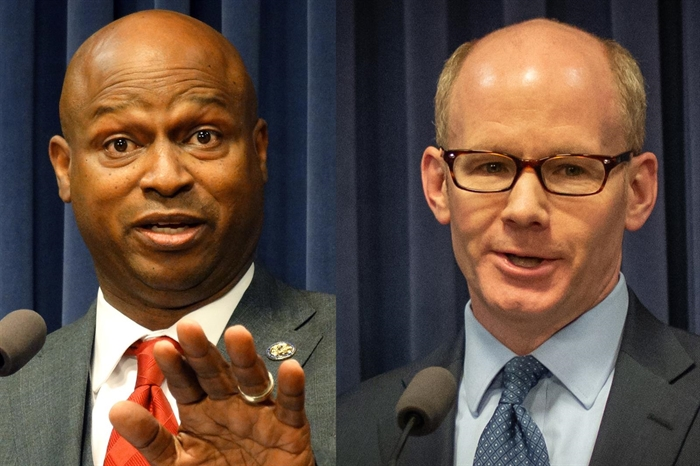 One of the things that I most certainly did not have on my 2021 legislative Bingo card last January was that an Oak Park liberal Democratic Senate President and the state’s first Black House Speaker would be fighting multiple legal claims that their new state legislative district maps deprive protected minorities of their constitutional rights.

And the ante was upped last month when both men went on record opposing an attempt by the NAACP Legal Defense and Educational Fund Inc, Chicago Westside Branch NAACP, and NAACP Chicago Southside to intervene in the redistricting case.

The brief was filed in U.S. District Court. The groups asked to intervene because, they claim, the reduction of Black-majority legislative districts in the new maps was unconstitutional.

The NAACP hoped to join lawsuits already filed by the Mexican American Legal Defense and Education Fund (MALDEF) and the NAACP of East St Louis which contend the maps were drawn in violation of the federal Voting Rights Act, which protects minority interests. Illinois Republicans have filed another lawsuit on the same grounds.

But attorneys for Senate President Don Harmon and House Speaker Chris Welch argued that amicus briefs at the trial level are highly unusual, the motion was untimely (“due to the necessary yet break-neck speed of this case, Defendants are already tasked with responding to three plaintiffs’ submissions and nine expert reports in a matter of twelve days”) and would prejudice the defendants’ case (“by seeking to inject new claims and new relief into the case at this late stage, the NAACP denied Defendants the opportunity to test their claims through motion practice and discovery”).

You gotta do what you gotta do in cases like these. I’m not trying to imply anything nefarious here, and both leaders have firmly maintained that their maps will withstand constitutional scrutiny, but you gotta admit it’s very weird and a little unsettling watching all of it play out.

Meanwhile, the NAACP’s own filing mentioned that the group had earlier sent a letter to Governor JB Pritzker “expressing concerns over the lack of engagement with the Black community in the redistricting process and the negative impact of SB927 on Black representation in the Illinois General Assembly.”

A letter sent by the NAACP to Pritzker, dated September 22, complained that the map legislation was “developed in a top-down manner, with little opportunity for actual engagement from community-based groups such as the NAACP.”

The NAACP also complained in the letter that it wasn’t able to adequately assess the impact of the new maps without weeks of work because of the data’s format.

“In short, the process used by the state deprived residents of the opportunity to have their voices heard.”

The organization then asked the governor to delay any action on the remap plan until October 19.

“This will give the NAACP and other groups a chance to take part in the democratic process and to provide you with maps that we believe are fair and preserve the voting power of Black voters in the state legislature.”

Governor Pritzker, who won the 2018 Democratic primary partly because of strong support in the Black community and who pledged during the campaign to veto a politically-partisan redistricting bill, signed the remap legislation two days after the NAACP sent its letter, claiming the maps “align with the landmark Voting Rights Act and will help ensure Illinois’ diversity is reflected in the halls of government.”

Oh, and by the way, the legal push-back from the two legislative leaders did indeed prevent the NAACP from having a major say in the outcome of the redistricting case.

The three-judge federal panel hearing the case ruled last week that they would accept the groups’ proposed amicus brief “for limited purposes.”

The court will consider the insights offered by the civil-rights groups “into the history of racially-polarized voting in Illinois.”

But more importantly, the panel decreed that the judges won’t allow the organizations to assert any new claims or challenge any districts beyond those already under review by the court.

The judges explained that the remap plan has been out there in the open since the end of August, all of the existing complaints were filed by the middle of October and the litigants “have been proceeding at a greatly accelerated pace” ever since. “That process was fast approaching its conclusion by the time the [NAACP’s] motion was filed, and there is no time for a do-over,” the judges wrote.