Defying Odds, Speaker Welch Has His 19 Democratic Critics on Lockdown 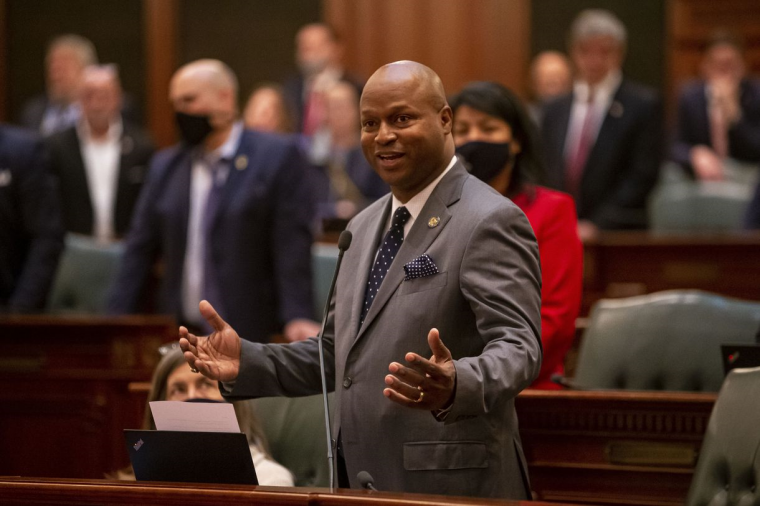 On November 19, 2020, the number of Illinois House Democrats who had publicly stated they would not vote to re-elect Speaker Michael Madigan grew from 12 to 17, meaning that Madigan at that point did not have enough votes to win. By December 1, two more House Democrats, including a member of Madigan’s own leadership team, had turned against him. “The 19” became a real force in Illinois politics.

The fight didn’t end there, of course. Unions, the Black Caucus, the Latinx Caucus, and others tried to reverse the tide, but it was no use. Madigan couldn’t reach the 60 votes he needed to win re-election and he eventually stepped aside. Representative Chris Welch was quickly elected to replace him, becoming the first Black House Speaker in Illinois history.

Almost all of the media analysis of Speaker Welch’s first spring session has centered around the opinions of Republicans. Members of the super-minority party didn’t say too many nice things about their chamber’s new leader.

But I was curious what those 19 House Democrats had to say about Speaker Welch’s freshman session. Not everyone initially supported him, after all, and Representative Kelly Cassidy (D-Chicago) didn’t vote for him when the House formally cast its votes.

All 19, down to a person, gave Welch glowing reviews on his first session. Even Representative Cassidy said Welch “did really well” during the session.

Cassidy also said she agreed with a statement sent to me by Representative Anne Stava-Murray (D-Naperville). Stava-Murray said she’s been “impressed” with Welch’s leadership, saying that he brought their diverse caucus together, which was also reflected in his leadership team. “There were wins that seem small but were huge — like having digital access to our bill-analyses anywhere beyond the House floor,” she said, adding that the remap and budget processes went “relatively smoothly,” and concluded, “All in all, I'm proud of what we've been able to get done for the people of Illinois under the leadership of Speaker Welch.”

One member of Welch’s new leadership team is Representative Robyn Gabel (D-Evanston), who was also one of the 19. “I think he performed very well,” Assistant Majority Leader Gabel said. “We were able to pass significant legislation. The new Speaker is accessible and fair to all.”

“He made real strides on building a new house that has some bad muscle memory,” said Representative Lindsey LaPointe (D-Chicago). Like a lot of her colleagues, Representative LaPointe praised Welch’s accessibility. “He seems to care about us as humans and our success, instead of as just cogs in a larger machine,” Representative LaPointe said, noting that small things like “the use of a shared Google drive” has made life easier.

Representative3 Maurice West (D-Rockford) was the only Black Caucus member to openly break with Madigan. “I think he's doing a fine job thus far,” Representative West said of Welch. “Morale is different than it was before. It feels good to have a speaker who is accessible.”

Representative Ann Williams (D-Chicago) made a bid for the chamber’s top post, but said Welch has done a “great job” during a difficult period, “both with regard to managing caucus dynamics and empowering individual members to have an enhanced role in policymaking, which I’ve not experienced before.” Williams said later that she didn’t realize how little input she had until Welch became Speaker and opened up the process so that member priorities were addressed.

Representative Kathy Willis (D-Addison) was the nineteenth person to register her opposition to re-electing Madigan and was on Madigan’s leadership team at the time. She also ran for Speaker herself, but said she thought Welch did an “excellent” job this spring. Like most everyone else, she praised his openness and willingness to listen and singled out his caucus-management skills as a big plus.

Representative Stephanie Kifowit (D-Oswego) also made her own bid for the top job. I talked to Representative Kifowit last and told her that not one member of the “19” had said a bad thing about Welch and asked if that surprised her. It didn’t. “I think that the caucus had been starved for so long that a fresh glass of water is just thrilling,” she said. “We were treated so horribly that it is a breath of fresh air to have somebody that respects you enough to meet you where you're at, or to actually listen to you, look you in the eye and listen to you, not gloss over it.”

I honestly expected at least a little criticism from at least some of those 19 people. I heard none.