When Martin Luther King Reached the Point of No Return 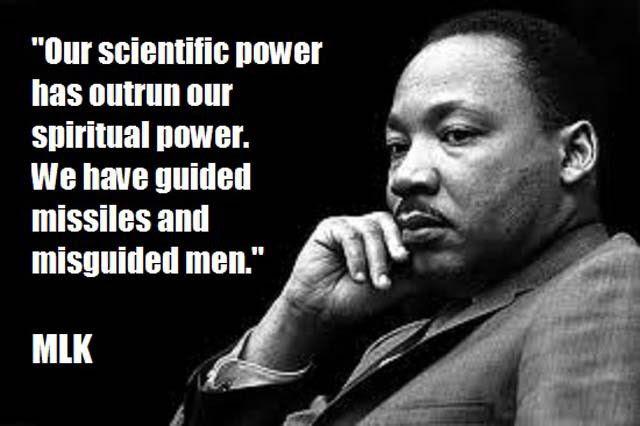 The quote in the graphic above reads:

"Our scientific power has outrun our spiritual power. We have guided missles and misguided men."

This quote is attributed to his sermons written in 1962-63 and published in the book Strength to Love.

"I have begun the struggle and I can't turn back. I have reached the point of no return." - Martin Luther King Jr.

The official dedication of the Martin Luther King Jr. National Memorial was scheduled to take place on Sunday, August 28, 2011 the 48th anniversary of King's famous "I Have a Dream" speech. (Because of Hurricane Irene, it has been delayed until September or Octorber.) If anyone deserves a national monument in his honor, it would certainly be Martin Luther King Jr., a man who inspired countless Americans, including myself, to take a stand against injustice.

King was an amazing individual: courageous, passionate about freedom, willing to tackle large-scale issues (such as materialism, militarism, and the Vietnam War), and relentless in his pursuit of justice; he stood his ground, even in the face of death threats and opposition from friends and associates. A warrior and a visionary, King saw firsthand what tyranny looked like and worked tirelessly to oppose it. As King observed, "The universe is on the side of justice."

King's journey to the "mountaintop," as he put it, began with a boycott in Montgomery, Alabama. City officials had done everything possible to stem the boycott of their segregated bus system by the black citizens of Montgomery. Inevitably, the city resorted to what had always worked in the past: the use of police power.

The date was January 26, 1956. It was in the afternoon, and the young minister of the Dexter Avenue Baptist Church was on his way home with two fellow church members. The acknowledged leader of the highly controversial boycott, he was put on notice to follow the traffic laws meticulously. There was no reason to make himself an easy target for arrest. But, as fate would have it, the police targeted the young minister, and he was arrested: "Get out King; you are under arrest for speeding 30 miles an hour in a 25-mile zone."

Thus began Martin Luther King Jr.'s journey toward jail. The moment of truth, however, had arrived for the young minister. Warned that he could be made to disappear by the authorities, fear began to grip King. As he writes:

"As we drove off, presumably to the city jail, a feeling of panic began to come over me. I had always had the impression that the jail was in the downtown section of Montgomery. Yet after riding for a while I noticed that we were going in a different direction. The more we rode, the farther we were from the center of town. In a few minutes we turned into a dark and dingy street that I had never seen and headed under a desolate old bridge. By this time I was convinced that these men were carrying me to some faraway spot to dump me off. 'But this couldn't be,' I said to myself. 'These men are officers of the law.' Then I began to wonder whether they were driving me out to some waiting mob, planning to use the excuse later on that they had been overpowered. I found myself trembling within and without. Silently, I asked God to give me the strength to endure whatever came."

This was at the height of segregation in the American system. When blacks got out of line, at a minimum they faced jail time. Only a month earlier, Rosa Parks, a seamstress, had refused to give up her seat on a Montgomery bus to a white man. This violation of the segregation law brought a swift arrest.

But King by now was the troublemaker. Cut off the head and the movement dies. This King knew. That is why he began to panic as his ride with the police continued: "By this time we were passing under the bridge. I was sure now that I was going to meet my fateful hour on the other side. But as I looked up I noticed a glaring light in the distance, and soon I saw the words 'Montgomery City Jail.' I was so relieved that it was some time before I realized the irony of my position: going to jail at that moment seemed like going to some safe haven!"

As the jail doors slammed shut behind King, he felt a strong inner peace: "For the moment strange gusts of emotion swept through me like cold winds on an open prairie. For the first time in my life I had been thrown behind bars."

Soon King's bail was posted and he was free to leave. But King's rendezvous with jail cells was just beginning. More importantly, the movement that began in Montgomery was moving beyond state borders. A nationwide movement with a capital M was in process. This made King even more of a target.

Several weeks later, King happened to be in Nashville giving a lecture when he learned that he, with others, had been indicted by a grand jury for violating Montgomery's segregation laws. He immediately booked a flight home, stopping over to see his father in Atlanta. Martin Luther King Sr. recognized that a new scenario had developed. The threat was no longer jail time. It was death. "My father, so unafraid for himself," writes King, "had fallen into a constant state of terror for me and my family."

Earlier, King's home in Montgomery had been bombed, and the police were watching his every move. After the bombing, King's mother had taken to bed under doctor's orders. King's father brought some of Atlanta's leading citizens into his home to speak with his son about the dangers of returning to Montgomery. But King knew that often courage in the face of tyranny is all that the oppressed have at their disposal. It was time, as King said, to take a stand. As he told those assembled: "My friends and associates are being arrested. It would be the height of cowardice for me to stay away. I would rather be in jail 10 years than desert my people now. I have begun the struggle, and I can't turn back. I have reached the point of no return."

Upon arrival in Montgomery, King headed for jail to discover that the others indicted with him had the day before surrendered for arrest. "A once fear-ridden people had been transformed," King wrote. "Those who had previously trembled before the law were now proud to be arrested for the cause of freedom."

Against incredible odds, the blacks of Montgomery won the right to be treated equally on the city's buses. Soon, the movement took on amazing proportions that would compel a government that refused to hear their pleas to listen and heed their demands. But not a shot was fired by the blacks of Montgomery. Led by a man who believed in nonviolent resistance to government oppression - a man who believed that governments must listen to and heed our demands - these brave people would soon transform the face of America.

Few suspected that King's voice would be prematurely silenced, but he knew his days were numbered. He knew there was a larger force at work in his life. And that's how he concluded his sermon - the last words he spoke in public:

"Well, I don't know what will happen now. We've got some difficult days ahead. But it doesn't matter with me now. Because I've been to the mountaintop. And I don't mind. Like anybody, I would like to live a long life. Longevity has its place. But I'm not concerned about that now. I just want to do God's will. And He's allowed me to go up to the mountain. And I've looked over. And I've seen the promised land. I may not get there with you. But I want you to know tonight that we as a people will get to the promised land. And I'm happy, tonight. I'm not worried about anything. I'm not fearing any man. Mine eyes have seen the glory of the coming of the Lord."

Forty-three years after King's assassination, our nation is still plagued with wars, government surveillance, and a military-industrial complex that feeds a national diet of warmongering. And King, once a charismatic leader and voice of authority, has been memorialized in death to such an extent that younger generations recognize his face but miss out on his message. Yet he still speaks volumes to us today.

"Speaking truth in times of universal deceit is a revolutionary act," George Orwell once said. Such was Martin Luther King. They may have killed the man, but his spirit of truth lives on. We would do well to learn from him how to speak truth to power.

Constitutional attorney and author John W. Whitehead is founder and president of The Rutherford Institute (Rutherford.org).